East Down Division, Six Days Ago, Under The Smoke

Here's another thing about that ped overpass on Division at SE 136th: an incomparable sight line.

I got a couple other zoom shots which I'll share tomorrow or the next day so I don't tap myself out and, besides, I'm getting a little tapped out when it comes to blogging today and I want to go paint so there's that.

Anyway! Division is an awesome street, really. There are tony parts, and working class parts, and it goes on forever, all the way from Portland through Gresham and doesn't give out until almost Oxbow Park, way out beyond Gresham. Urban, rural, farm, forest, Division will give it to you.

I return us, though, to that pedestrian overpass I was going on about in the last entry. I said there was a story regarding Birthday Hat, and here it is:

It was windy that day, and I was clicking away at the sky with the incoming smoky miasma, somewhat furiously as I had to get back down to the Dutch Bros where my latte was coming to completion and the Brown Eyed Girl would be waiting to take us on to the Franz store or whereever else it was we'd be going, and what I should have foreseen happened and a gust of a breeze (It was windy that day) plucked Birthday Hat off my head and sent it spinning down to Division Street below.

I got a glimpse of where it landed: in the left turn lane going from Division west to 136th south. A part of me was giving it up for About To Be Crushed, when a red car driven by a black man pulled into the turn lane, snagged my rogue trilby, looked up, saw me, I saw him and we somehow communicated that I'd make my way down and he'd meet me on the corner. Powering down my camera I made for the stairs.

It's fortune that the light at 136th seems to take so long to cycle and that the drivers on Division westbound were courteous that day because I made it down to that car and gratefully retrieved the hat. Either that, or I was terribly motivated. But the hat was gotten back and sincere gratitude expressed for this kindness that day.

And, I did get this shot: 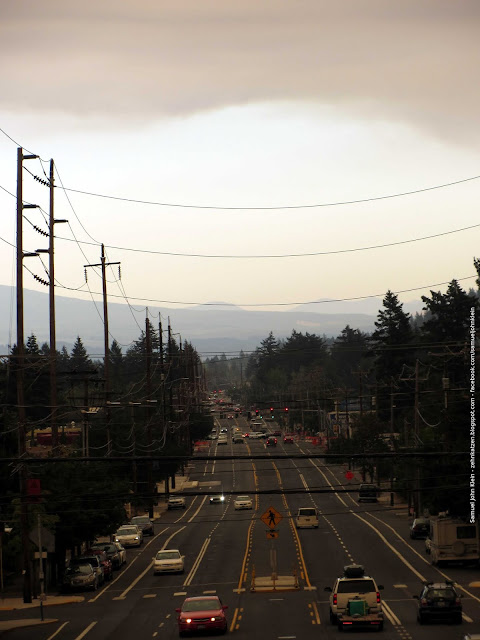 Division under looming smoke, one of the last glimpses of blue sky we'd have for many days (we still don't, as of this writing) ranks of familiar Cascade foothills.

And me, still in possession of Birthday Hat, which seems to have a sort of modest level of luck attached to it. Well, I may not have much faith in supernatural explanations, but I'll roll with this one for now.