3607
I've been on a deep dive through more than 20 years of collected paper ... maps, many of which I've collected, a great deal of which I've drawn myself, because city maps were always a passion for me.

I'm proud to call myself a Portlander, but my birthplace, along with several greats and other near-greats, was (and still is) a place called Silverton.

When I was a kid, life was not always kind. I was the bullied one, that one in every class, the one that kids let new kids know about so they have a head start on it.

That was then. I lived. One of the things I did to make me feel good was to deep dive into maps. I soon discovered I was transfixed by the patterns of streets, the way they ordered themselves amongst each other, the shapes and patterns of blocks, the shapes created by the city limits and the way the pattern of streets lived withing them. And, perhaps in what I should have seen as a presage of blunted ambitions, just as I got to the grade in Mark Twain Junior High (as it was then) and was in the middle of a class on how to draw a map of Silverton ... that's when we moved to Salem.

It's okay. It is what it is, or what it was. I wanted out into the wider world anyway; Silverton, as it was, was a small, stifling place. Had I been born there and grew up in the Sliverton that exists today, I may well have stayed. It's certainly not the same place.

But as you can take the boy out of Silverton, you cannot fully take Silverton out of the boy, and there is a corner of my mind that remains posessed of the place, the rearview seasoned to a large degree by the sepia tones of nostalgia. The parts of my childhood in Silverton that were kind? They were quite nice. We lived in a house on the edge of town a road that still has an awesome name (Steelhammer) and I had a bedroom that had a dormer window that looked east across the fields north and east of town. My mom worked her tail off; we never felt poor. On clear days, Mount Hood/Wy'east  could be easily seen, starting a visual love affair that continues unabated to the present day.

In 1994, still nurturing dreams of becoming a drafter or somehow working my way into drawing city maps for a living, I took an ODOT map of Silverton dated 1986 and created my own. Here's what it looks like: 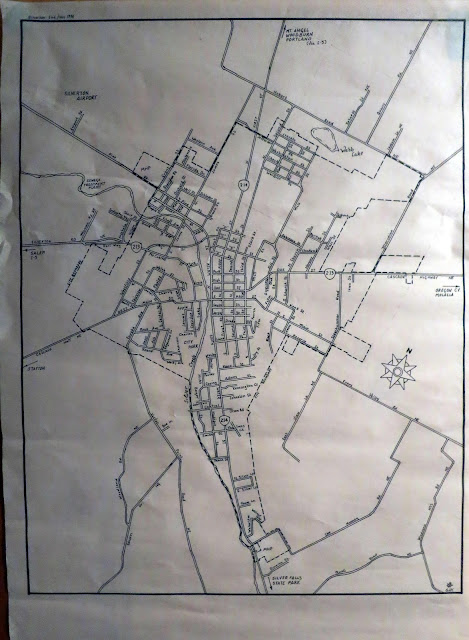 This is Silverton very close to the way it was when I was in elementary school. Things changed very slowly in Silverton, if and when they changed at all: comparing this map to a modern map shows the city boundary flung out considerably in just about every direction, encompassing a couple of wholly new neighborhoods on the east and south edges of town; especially on the south and west to rope in the Oregon Garden (if you had told me as a kid that Silverton would eventually become a tourist destination, I'd have thought you un-sane). Silverton as I knew it scarcely had more 4,500 people; now there are more than 10,000, and it has become a hub of art and culture.

You know how you feel when your ex goes off and finishes themselves and become magnificent and your still struggling to get your stuff together? I know what that's like, only it's with my old hometown. Anyhow.

Here's a detail of the city center: 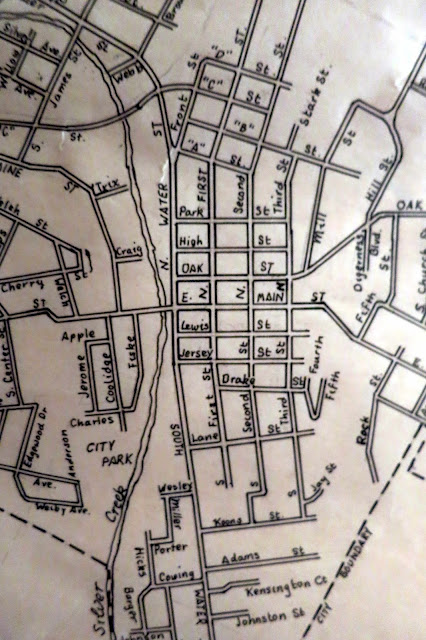 Starting from a primly-gridded downtown and city center, Silverton just grew any old way it pleased. The leg-shaped extension of the city going south was constrained by the narrowing valley that Silver Creek flowed out of. The grid tried to right itself on the east, but just kind of straggled up the hill on the west; the northwest corner of the city seemed to have its own ideas. North Water street became an east-west street. And up near a mill on the north edge of town which had become a manufactured-home plant by the time I existed, a tidy 3-by-4 block grid became its own neighborhood: Milltown (which, as it happens, was what Silverton was called before it was called Silverton).

And this is a detail of my side of town: 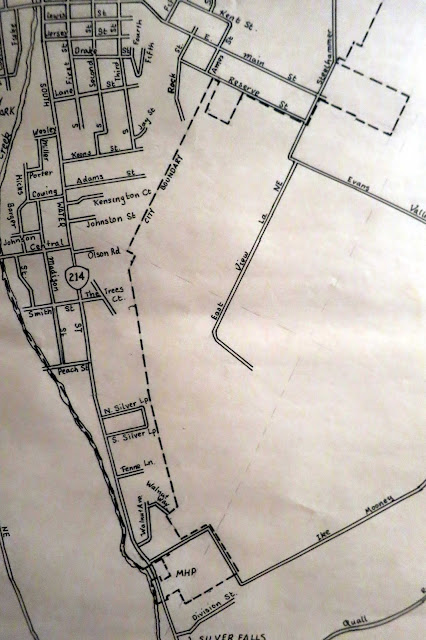 If you follow East Main Street to where it ends there at Steelhammer Road, and follow it south past where Reserve Street ends, there's a segment between Reserve and the bend where it becomes Evans Valley Road which is where my childhood home was, about dead center in that segment. The house I was a child in still exists, but there is what looks like an upscale cabinet maker there now. in the area south of Reserve and between the city limits then and Steelhammer/East View Lane that was an absolute blank and as I knew it then was a bramble-filled gully is now a capacious subdivision full of what I can only assume are fairly-expensive homes, all of which have been annexed into the city ...

... except for my old home. The city limits dance around it. Still just outside of town. I find this too cosmically funny to put into any effective words. Never mind the glandular subdivision that's sprung up at the south end of town, around the intersection of Hwy 214 (South Water Street) and Ike Mooney Road.

The area I lived in there was called by adults East Hill (West Hill being the opposite side of Silver Creek, where West Main Street ascended the heights) and was called by us kids Danger Hill: at the foot of it, just east of Third Street, where East Main ascended in about a 5% grade, a red diamond sign proclaimed DANGER and a rectangular sign below it explained HILL. Danger Hill. I don't know how they deal with it these days; those houses on East Main between Fifth and Rock, which are perched on that slope, must have some pretty nervy days when its icy or when the snow that seems to visit us more often comes to pay another visit.

Sic transit gloria iuventae, and all that. So it goes.
Designed by: Samuel John Klein at 12:55