3726Not to get into too much profundity about it, but the pandemic has made us re-think the idea of the burger-restaurant dining experience sans lobby.
We do miss those things in general, the former 122nd and Glisan Burgerville notwithstanding. But when we do get BV, the question highest on our minds is, of course, where do we go to enjoy it?
This last weekend we had come out of Gresham and had gotten our burgers at the BV at 162nd and Division. Brown Eyed Girl at the conn, we proceeded north on 162nd and then west on NE Glisan St. I had no clue. She has learned her geographical lessons well, however, and knows where to get an unexpected viewpoint.
Portland's 'flat east side' is something of a myth. We just don't have a junior mountain range like the west side does; there's plenty of hills, slopes, dropoffs, defiles, what have you. And just as you past the entry to the legendary Glendoveer Golf Course, just west of 148th on Glisan, the road drops and you get kind of a nifty urban view, and that's where we parked and ate (it's Walla Walla Sweet onion-ring season, for those who care ... they were superb, of course) and contemplated life.
At sunset. Which also made it kind of poetic. 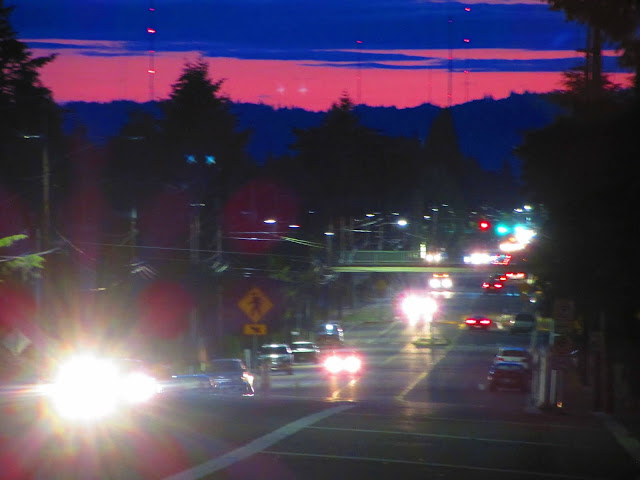 There isn't a thing in that shot that doesn't mean something to us: from the slabby width of Glisan to the radio towers on the ridge of the West Hills, some fifteen miles away.
AND NOW, IN BOKEH!!! 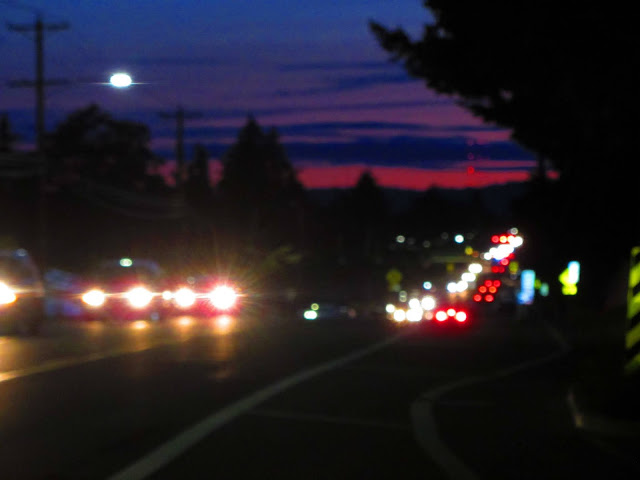 ... which was kind of accidental, because the camera wasn't sure what to focus on, but the blur and the view please us so much that we'll pretend we meant to do that.
Designed by: Samuel John Klein at 09:53