The Rainbow Tacqueria Of Parkrose

3705NE Sandy Boulevard east of 99th Avenue is a wholly different Sandy Boulevard. This neck of the woods is downtown Parkrose, a neigborhood of outer east Portland that has, along its commercial axis, seen better days, as many areas are in this time of flux.
Sandy Boulevard - a road named not for the little town way out toward Mount Hood but because it stretched toward the Sandy River, according to MacArthur - stops being a diagonal road at this point and follows the general trend of the Columbia River about a mile to the north. This road, once US Hwy 30, used to be one of the principal east-side gateways to Portland, and architectural legacies of that time can still be seen along that mile-or-so of road ... buildings with vague Art Deco lines, which served interstate travellers at one time with nightly lodgings are now shabby-yet-clean motels and small businesses. It's history through a smudged glass.
At the corner of Sandy and NE 115th, there's a building that echoes that Art Deco detail. Sitting at the corner of a lot containing an L-shaped building that appears to be apartments now but at one time must have been a roadside motel is the Antojitos Mexicanos Taqueria.
Up until a few months ago it was content to wear a coat of bland, oatmeal-hued paint. Nothing special. Then, one day, it exploded in color. Now it looks like this:
From the west: 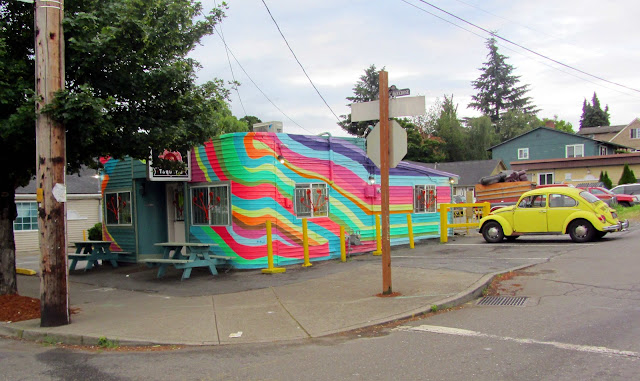 And, from the east: 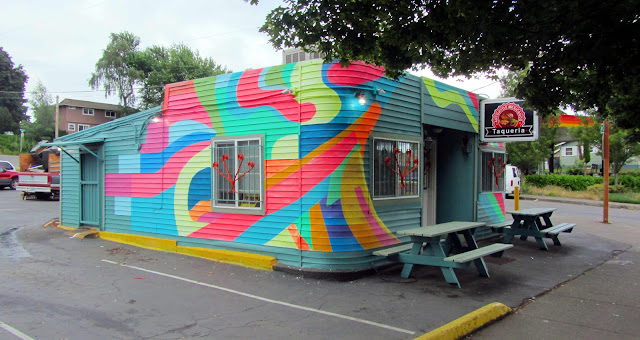 Simple yet playful, and anything but boring, thanks to an artist named Pablo, who signed the work in the lower right corner of the facade, with a date of 2020.
It, like many eateries still, is closed, only takeout at this point.
Designed by: Samuel John Klein at 09:52