2506.
Today was the day that far-flung clothing retailer Gap pulled themselves a Tropicana.

Some time ago I commented on a brand redesign that Tropicana - the OJ people - tried. It was a strong effort, thought out and executed well (see: http://zehnkatzen.blogspot.com/2009/03/tropicana-oj-redesign-fail-brand.html) but it had the fatal flaw that nobody really could have seen: Tropicana's customers were so fond of the straw-in-orange, which had become iconic without being noticed, you'd of thought that Tropicana had killed a family member in cold blood.

Well, today (or perhaps yesterday) Gap rolled out its own brand redesign with no apparent fanfare, having the new logo up on its website with little or no announcement. For review, here's the "old" Gap: 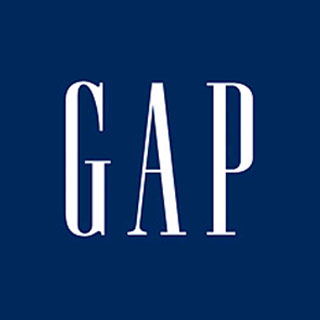 Okay, by now (and especially if you've found the discussion on Twitter) you know that this got a lot of feedback, most of it negative, and a good portion of that snarky. And, in moves that have already gotten tiresome, two anonymous Twitterers have debuted accounts (@GapLogo and @OldGapLogo) that spoof the whole thing by personifying the each logos reaction to comments made about them.

I'm not a customer of Gap; I have no emotional capital invested in them. but it's said that two years time has been invested in refreshing the logo, and honestly, I can't see why they bothered. The new Gap logo isn't a bad one, it actually does the job a logo ought to, but when I look at it, I don't see the mature brand Gap is ... I see a new clothing store just starting out.

At the very least, I didn't see the Gap's old logo as an identity in need of that much of a refresh. Gap's old logo was a very classic design, and by this I mean classic in the good way, the way Wayfarers never go out of style or the little black dress is a staple of every woman's wardrobe.

And saying that Gap "pulled a Tropicana" is actually a little unfair on Tropicana, in as much as

they tried to transition to a strong, designed and fresh update. The new Gap logo looks kind of like it's Microsoft Word WordArt. About the biggest emotion I can summon for it is a "meh".

When I think of a company that has resisted the urge to change its logo for a very long time because it makes sense, I think actually of JCPenney. Before 1971, "Penney's" had a kind of a spacey, jet-age, logo. In 1971, however, it changed to a simple, extremely minimal, light Helvetica treatment of the name in a simple red square (see right).  It's stayed that way ever since, 40 years almost, and despite that age it doesn't seem as dated as the pre-71 logo did when they changed. it has a timeless quality that kind of puts it beyond century-and-decade. They'd be foolish to change it.

Of course, when the company's reaction to the reaction is to tip its cap to its many critics and then open a page on Facebook to act as a crowdsourcing for a hoped-for even better version of a new logo ... well, you've just got to wonder what's going on. But, no matter how you feel about it, you can go to a site like http://craplogo.me and generate your own Gapified logo.

Or, if you have Photoshop or Illustrator (or Gimp or Inkscape ... or MSWord) just lay down a few letters of bold Helvetica or Arial, stick a gradated square behind, and there ya are.