3248.
Really quite gratifying things happen when you pay your library a compliment. Here's what happened when I did to mine.

Mine is, of course, the mighty and rightfully-legendary Multnomah County Library. It's good for reasons, and reasons too numerous to relate right now. As a lifelong library user and book lover, it's a nice place to be. Its reputation can hardly be gainsaid: according to the Wikipedia article on same:


According to the Public Library Association, it ranks second among U.S. libraries, based on circulation of books and materials, and ranks first among libraries serving fewer than one million residents. In this respect, it is the busiest in the nation.

The proof is self-evident; you just don't get that way by accident. MCL is good.

Our branch is the Midland Regional, at SE 122nd Avenue and Morrison Street. Being a regional library means it's one of the larger branches; this particular branch would suffice as the main public library in many mid-size American towns. Big and well-supplied, it has enough stock on the shelves that I nearly always find something even if I'm not particularly looking for anything. On Saturdays, it's our home-from-home, as we spend many happy hours finding nifty stuff. It's made me a The New Yorker habitue´. Wife catches up on the news and checks out many, many more books than she really needs to have. It's an adult advenure.

Recently, the chance presented itself to make a comment. Funny thing about things you love; you don't often stop to think to compliment these days; it's so much more energizing to have a complaint. When something works the way you think it should work, we take it for granted, and YT is just as much an addict to that sort of thinking as any other modern. But the chance to give props presented itself and I took it. Here's what I wrote (from MultCoLib's edit …)


“We make our library day the centerpiece of our week. I use the creative atmosphere to try to inspire art; my wife uses it to explore things she's interested in — and there's very little she's not interested in. She catches up on the local papers, I stay current with The New Yorker. I find out about art I want to do. She culls recipes from the newspapers. She learns about Oregon history; I discover the literature and fiction that I should have been reading when I was in high school (Proust! Pynchon!).

Above all it's the staff of this particular branch [Midland] that make it such a welcoming home.… we feel blessed of good fortune to have such warm, satisfying and smart relationships with such committed and passionate staff. We love them, not only the ones you have here now, but the ones who have moved on.
As homeowners and taxpayers thereupon we, as most local citizens, are keen on where that money goes. We know of no better value than the tax money we send out to support the County Library system — it gives back much, much more in intellectual and recreational value than we pay in. Great stock, Great people — we're proud of our Library, and feel extremely fortunate that we get to have one that is so very good.”

Not too long ago, we got a reply. Here it is: 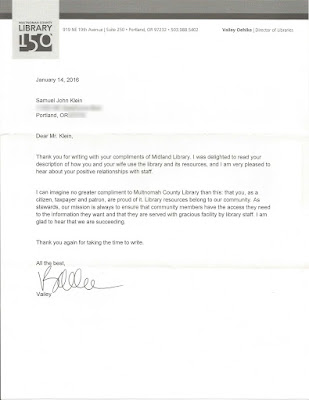 Director of Libraries? Sweet! Thanks for the reply, Vailie. This is totally going into the scrapbook.

But the feedback doesn't end there. Yesterday night, at the end of our Sunday Powell's City'o'Books visit, one of the clerks mentioned that she'd recognized us from the post. ***CELEBRITY!!!***

I mean, we got that goin' for us. Which is nice.

Not only is Portland the sort of place were you love books, but the books (and the purveyors thereupon) tend to love you back. And that's part of the reason why Portland's still home to me after all these years.