2862.I suppose it had to happen eventually. Well, maybe it doesn't have to happen, but it is.


Call it the Case of the Show that Refuses to Die. After a 46 year-run on KPTV (12), reruns of "Perry Mason" are finally leaving the Portland Fox affiliate. But Perry and the gang aren't leaving Portland airwaves. The show moves to KPDX, aka PDX TV (Channel 49/cable 13) at 8 a.m., as of Tuesday, Sept. 4.

This was a Portland quirk back before Portland quirks were so fashionable. It didn't require you to put a bird on it. It was just a verity, stable as Mt. Hood at sunrise, dependable as a traffic jam on the Banfield at rush hour. It just was. And now, Patrick McCreery, the man who said, back when he came on board KPTV in 2009 (as reported in The Big O by Tom Hallman, Jr.):


When Patrick McCreery was named general manager at Portland's Fox KPTV (12) six months ago, corporate bosses gave him a free hand as long as he followed an unwritten 42-year-old rule: Don't mess with "Perry Mason."
"It's untouchable," McCreery said. "We can add shows and take others off the air, but 'Perry' is nothing to fool with."

I'm wondering what part of what he said he didn't understand there. He seemed to get it and get us, and KPTV wasn't the wonderful sexy beast it once was, but it was still pretty okay.

Now what do you have at noon? Are you sitting down, Portland?

I mean, just go out and kill Santa Claus and the Easter Bunny while you're at it.

Someone want to go check Rod Anders's grave to see if he's spinning in it?

And you can still watch Perry with your lunch … if you want to eat lunch at 8:00 AM.

This is going to take more than putting a bird on it to heal.

*apologies to Hart Williams.
Designed by: Samuel John Klein at 13:16 No comments:

Email ThisBlogThis!Share to TwitterShare to FacebookShare to Pinterest
Filed Under: KPTV, liff in PDX, pdx legends

Obliqued Helvetica Bold with an odd little bite out of the O designed to line up with the S adjacent. Many famous logos acquire nicknames; NASA's classic is called the Meatball while a latter-day interpretation was called the Worm. The above rendering of MSFT's identity, because of that hungry little ovoid in the middle, was called Pac-Man.

MSFT itself has been through a few versions. There was the one born during the Albuqurque days, and the gone-but-not-forgotten Bibbet.  Pac-Man came to was born in 1987 and died just now, in 2012, 25 years - a long time, an eternity for a technology company. But the logo, designed by Scott Baker, has been a stable presence, and not a bad symbol - one I've always felt showed exactly how far you can got with a tiny little bit of design, placed just-so.

It's not your dad's MSFT anymore, kids. This is what we are now:

Logos are supposed to be full of symbolism. MSFT tries to keep it simple here. The four-color pane, or the 'Symbol', are (cue the whalesong) intended to express the company’s diverse portfolio of products. Peter Bright, writing for Ars Technica, makes a number of interesting points, amongst them: the new Symbol is a better fit with the Don't-Call-It-Metro design grammar that MSFT has devised while, at the same time, being – at best – an awkward dissonance to the other logos in the family so far represented by Windows 8 and the new Office logo, both of which suggest a sense of visual perspective that is totally absent, here.

The best point he made, and one I missed until he pointed it out, is the obvious (now) point that the colors in the Symbol now exactly replicate the colors in the obsolscent Windows logo, making it perhaps an appeal to or a way of keeping the old logo alive, which would be a good thing to me, because I'm still unimpressed by the Windows 8 logo evolution, which takes everything that was interesting and, actually, kinda nifty about the classic Windows logo (one I always enjoyed) and turned it into something characterless and pretty dull.

But the risk when you update a well-known logo for a company as famous as this is that you risk also losing a sort of familiarity, a resonance, that's built of long familiarity. There's a lot of good will that the design carries, and you risk losing that.

The new logo is a success in as much as one thing I noticed that I wasn't aware of when I considered the old logo and was only really apparent in comparison: the old logo's heaviness and darkness. There's a lightness and a color with this that is really quite welcome, and the use of a type that appears to be Microsoft's house font, Segoe, gives it an instant visual home with the rest of the current MSFT visual look. It's trim, fit, clean, and modern. And that's good. And so is this logo.

2860.The Domino's Pizza chain, nourishing legions of families and college students since none-of-us-remember-when, looks like it's going to start updating its image.

As revealed by Brand New, the Facebook page of Domino's New Zealand have rolled out a new look to the logo. If you don't care to follow the link above, here's the new face:

And if you've stopped paying attention (because you're not going to eat the logo, yes?) the old face was as such: 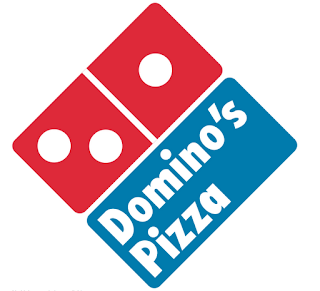 The diamond-shaped 'box' is no more; the blue now colors half the remaining domino.

Brand New's reporting signifies that it was not yet clear (at the time of their writing) that this was a local or chain-wide change, but Advertising Age and the Los Angeles Times have since published stories that indicate that this is more than just a logo rework but sort of a 'warm re-boot' of the entire brand, which has added things like artisan-style pizzas and is now working on a re-think of the Domino's store experience by spiffing up the spaces into more welcoming environments, and even maybe having a limited number of sit-down spaces at a few of them.

The new logo does show a bit more polish and sophistication. The type is where the slickness really shows; it looks like the type I see in the more hip print material I see, akin to Gotham or Freight or suchlike. The separation of the domino out is kind of a deconstruction, a 'dressing down' of the logo to its essential. The inclusion of the red is simply clever. The only real awkwardness is the matching of the the straight type with the tilted domino … they don't harmonize, and the space under the domino comes off as something one wants to fix.

But it's already starting to grow on me, so I think this one is a qualified success. I'd be interested to find out what the vox pop has to say about this one.
Designed by: Samuel John Klein at 00:57 No comments: