[42] Those Were All Personal Days

While this humble chronicle isn't even near the most read blog locally, there are a few stalwarts who check this place on a regular basis. You will have noticed that my participation and presence have dropped rather remarkably.

I may not be the most popular kid on the block (and certainly not amongst the cool) but I have valued my consistency.

The unexpected hiatus began with my catching What Was Going Around™ back during January, Week 2. This developed into a cough that was pretty much a twenty four seven thing, with concomitant effects to my sleep. Things just kinda went downhill from there as my health, then my sanity hit something of a rough patch.

Midway through that illness, a hoped-for opportunity not only didn't pan out, but didn't pan out in the most despicable way. I'll not write on that just this moment; it is a sort of post that every aspiring designer passes, though, and as such is germane to the writing that I do do, so I'm developing something out of it.

I have suffered the disappointment of still not being paid to design more than six months since leaving school with a diploma. That certainly contributed to it.

But, mind, I'm not going for sympathy. Perhaps I'm just thinking this one out loud. If, in life, one must taste failure so as not to take victory for granted, that must go double or more for design, where the right combination of happenings can combine, so far as I've seen, to one very sweet success indeed.

Sure, I love design. That's a given. I also am uppity enough to think that I deserve to make a living at it.

So, I'm getting back to arranging a few things I'm working on as continuing projects:
Okay, enough self-obsession. The next entry down here will not be for a few days; I have a few article deadlines to meet, and I am way behind in planning.

Tomorrow is a work day. Writing, writing, writing. Tuesday we visit The Squirt™, who stays with The Mom™ and The Dad™ down in my old home country, about an hour away.
Designed by: Samuel John Klein at 19:54 8 comments:

Like many, I saw the news about a fire in a south Salem duplex that tragically claimed the lives of two very sweet children.

Understand that I wish to make no light of this situation, but I was bugged by how familiar that duplex looked. After dialing up the Statesman Journal's coverage of it, my suspicion was confirmed; I lived in that very complex when I was in high school.

If my suppositions about which individual unit is correct, I likely lived in the other side of the very duplex which burnt.

Update, 24 Jan 06 at 0713: I have just heard on the radio that the cousin of the two victims, who was at Doernbecher being treated, has passed. Truly one of the most tragic of tragedies is the loss of a child. Think of the Arendt family in whatever prayers as you may.
Designed by: Samuel John Klein at 05:55 No comments: 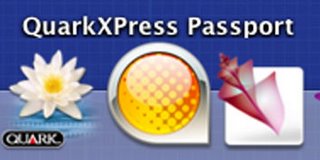 Thanks to the indispensable Pariah S. Burke, I have the QuarkXPress 7 public beta.

It's bigger than 100MB, and here am I still on dialup; if I were left to my own devices I'd be downloading it for the next two weeks. Once again, I owe him one.

Experiences so far are positive; I won't go into too much detail because I need something to write about for either QuarkVsInDesign.com or Designorati.com (or maybe both). But I will offer a few quick takes on what I've seen so far:

Designed by: Samuel John Klein at 03:29 No comments: 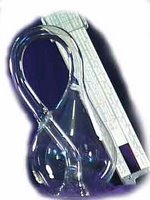 How would you like to have your very own 3D immersion of a 2D non-orientable manifold that can only truly be represented in 4 Dimensions?

Now, all that high-talk in the first paragraph was just a way of saying a bottle with one side (take a good look at the accompanying picture, and let your eye travel about on it). In the same way that a Möbius strip is is a one-sided surface, a Klein bottle is a one-sided volume. It has only one side; or, looked at another way, its outside contains its inside. This, by the way, is what they mean by "non-orientable", which is another way of saying you can't say whether you're inside it or outside it.

The difference between 3D and 4D space is, of course, that in 3D space there is a hole in the side where the spot can come through and then be mated to the base. In 4D space the bottle's side is pierced by the spout but is still intact.

It's topology, so that's about the limit of my understanding too.

But the reason I told you all that is to tell you this: there's actually a company, Acme Klein Bottles, that makes and sells them. You can find 'em all there; classic Kleins, Erlenmeyer Kleins, even Klein Steins (which you may or may not be able to drink from). Prices range from $30 (for the small classics) to $12,000 (for huge Kleins for people with much more money than sanity.

In case you can't get through to Designorati.com to get to Quark.com to sign up for the free Public Beta download program, here's a link directly to Quark's Quark 7 page:

Originally it was so overwhelmed by requests that it was returning confusing error-on-load message. That situation should have cleared up by now.

Here's the drill:
The buzz I've been hearing lately has been somwhere between positive and pleased.
Designed by: Samuel John Klein at 21:23 No comments:

Well, I pick a hell of a time to take a couple of sick days, don't I?

This means that I wasn't able to take part in covering the breaking news with the rest of Team:Designorati, but no matter. They've done a hell of a job, which you should read.


And as someone who enjoys layout design just about more than anything else, it's notable indeed that the public is getting its first look at QuarkXPress 7.0. After the release date set at the tantalizing "Real Soon Now" for as long as anyone cares to remember, Quark Inc. has finally put up a public beta available for download (it's about 147MB, so you dialup customers, either find a broadband spout or prepare for a wait).

Pariah Burke mentions it here, at QuarkVSInDesign.com, including a link to Quark's Public Beta registration site. The Public Beta is automatically set to expire after 31 March 2006, so you still have to pay for an upgrade, but at least you'll get to see, at long last, what QuarkXPress 7 is supposed to look like, and after all this waiting, that's something to say.
Designed by: Samuel John Klein at 18:29 No comments:

While the dream of networking The Wife™'s Win98 machine to my PowerMac G4 remains elusive, some improvments can be made.

Now, at least, the Olde Beeste has appropriate drivers, so we can hot-swap the Memorex 1GB Travel Drive or the Zip250 if we so choose. SneakerNet it is, then, and better than the typical Wintel 1.44 MB floppy, and less wasteful than endlessly burning CD-Rs.

The sound of a Zip250 spinning up whilst attached to a 1997-9 vintage Dell is something odd, let me tell you.
Designed by: Samuel John Klein at 05:20 3 comments:

From The Oregonian we find some good-ish news.

Over the last year The O has been running an ongoing series (in the East Metro pullout) about Gresham's first 100 years (it's Gresham's official centennial year). Now, I rib Gresham a lot but the series has been very interesting with many good pictures and stories. This last week was no exception.

The last page of it was a collection of quotes taken over the year. One was a loving rememberance of Zim's Shopping Center (223rd and SE Stark) by Jan Weston of Weston Pontiac, the firm that acquired the land and subsequently cleared off the old Zim's building, including the landmark ball-shaped sign (which I eulogized earlier).

The O quoted Jan as saying that the ball been carted away to storage. It didn't say what they planned on doing with it, but I certainly hope we can see it put up again some day.

Good on you, Weston-the building was dilapidated, but the sign was unique. I'm hoping you honor it's uniqueness.
Designed by: Samuel John Klein at 06:57 5 comments:

A comment in this post on this chronicle by Cat Morley (thanks, and I'm honored!) of Designers Who Blog alerted me to another kudo: the site IF (http://if.psfk.com) has featured not only DWB but Chris Gee's excellent site The Prepared Mind it it's list of Top Ten Design Websites of 2005.

In the meantime, congratulations to online designers who show the way and, seriously, inspire me daily.
Designed by: Samuel John Klein at 19:41 No comments: