3534A.
The actual title of this objet d'art is Tugboat's Passage.

For those who wish to know. 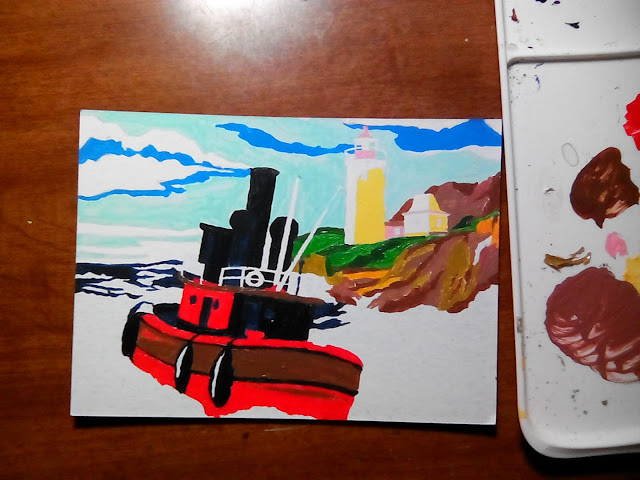 Designed by: Samuel John Klein at 06:14 No comments:

The Daily Paint By Number: Liberty and Boat

3533A.
Moar paint (as acquired two days ago) means, of course, moar painting.

The Statue of Liberty is completed. Now ... well, it's the fishing boat, now. 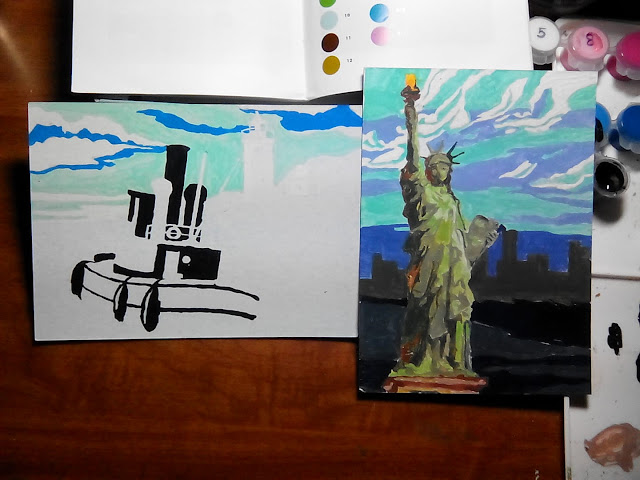 The Wife™ has procured frames for just about everything.
Designed by: Samuel John Klein at 13:37 No comments:

Email ThisBlogThis!Share to TwitterShare to FacebookShare to Pinterest
Filed Under: paint by number

3532A.
Just very recently I had another absolutely satisfying interaction with the people at Living Computers in Seattle, who wanted to use the Colossus/Guardian 2020 campaign sticker design for stickers meant to be sold in the gift shop.

This is always a good thing. I really adore the LC people, who are some of the most straight-up ethical people you'll encounter when it comes to creatives.

The original design was a quick one-off done in JPG format in Adobe Photoshop CS4. They wanted to release a limited edition sticker in a bigger size, and more durable - appropriate for a car's bumper, for example. But the trouble with the pixel image is ... well, I'll be everyone reading this knows. You size up, and the jagged edges show. So, a vector version was called for.

Break out the old Illustrator CS4 and hit the old iMac. 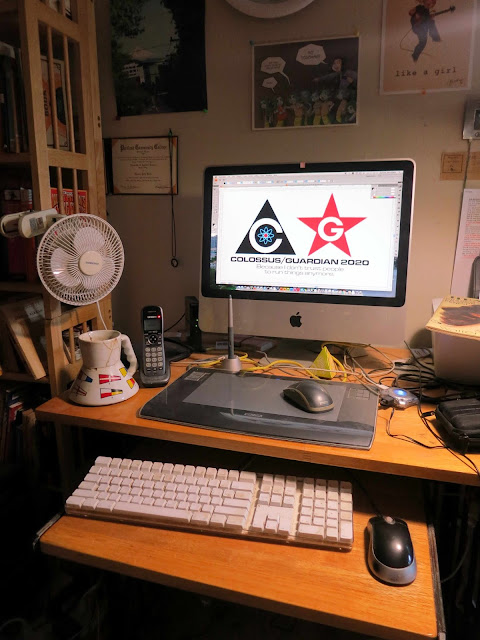 Was it fun? Yes, it was fun. Also, since I'd gotten to see Colossus: The Forbin Project a couple-three times since, I'd noticed that the Guardian logo, which I'd recreated from memory, was a bit 'off'; the starbucks on the red star were a bit squat, which gave room for a larger capital G letterform in it. I rectified that in the vector file, and, because AI has layers you can turn on and off, I included the original version as well as the updated version, so Living Computers can, as the President said Colossus can do with its weapons, select and deliver whatever they consider apprpriate.

The updated version looks like this. The Guardian logo is much closer to the film version now. 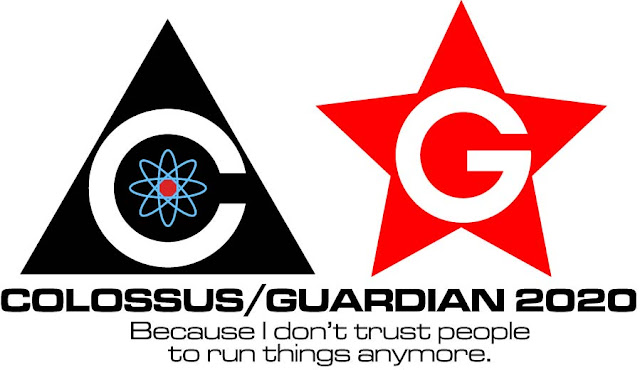 Zob Loves The Library. Of Course.

3531A.
Where ever we go, that friendly little guy, Zob the Glob, tends to tag along.  And, like us, he adores the Multnomah County Library.

Zob's interested in everything. But he's easily distracted. He was keen on American history ... 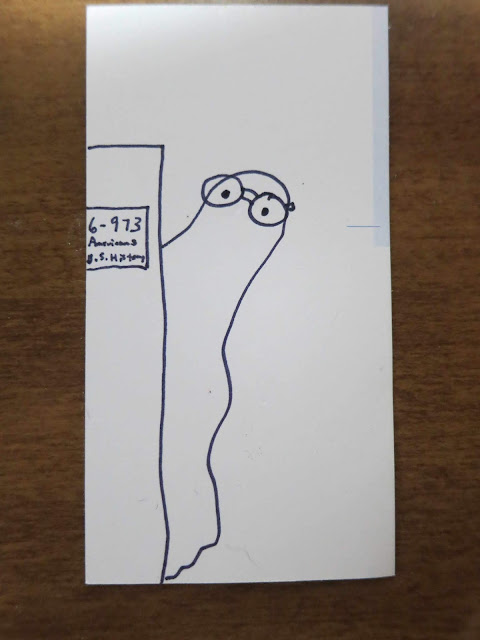 ... but then noticed we were interested in something ourselves. 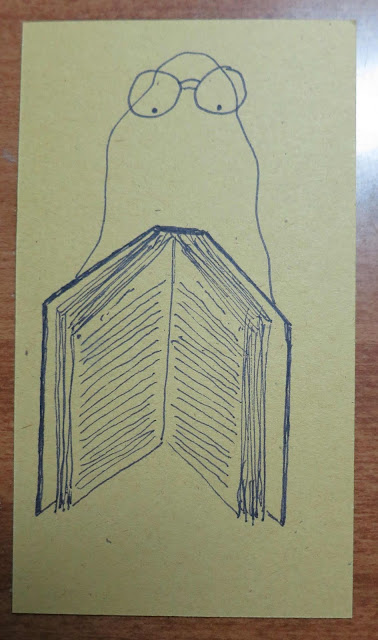 ... and he couldn't resist checking it out.

(NB: Zob is copyright my wife, who created him. Used with permission).
Designed by: Samuel John Klein at 13:54 No comments:

Email ThisBlogThis!Share to TwitterShare to FacebookShare to Pinterest
Filed Under: cartooning, cartoonists, Midland Library, The Wife™, The World of Zob

So, I Needed More Acrylic Paint For My Paint-By-Number Habit ...

3530A.
I've been playing about with Paint-by-number again. The set I bought last year at Powell's has eight panels in it, and I'm on number five, which is the Statue of Liberty, here: 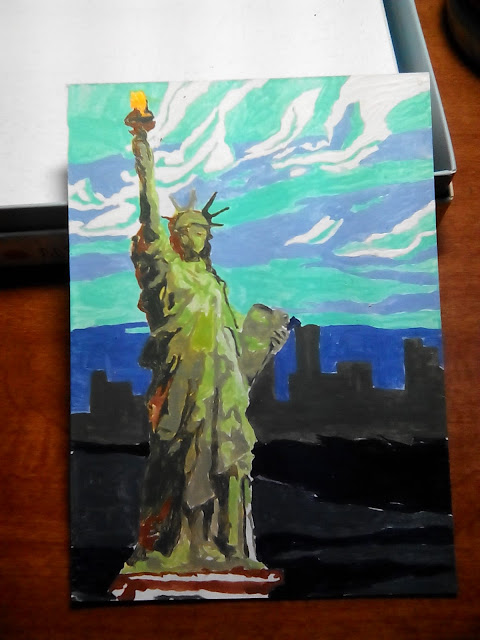 The set was produced to leverage the popularity of the book Paint by Number: The How-to Craze That Swept The Nation by William L. Bird (and published by Princeton Archtectural Press) into some art kit sales. There's a small book on the projects with text by Dan Robbins, the OG of Paint-by-number, the man who helped start it all with the Craft Master series by Palmer Paints, back in the day. It's not a bad set, and the pieces in it have been quite fun (I don't recommend it for anyone with significant visual impairment, as the lines and numbers are very small and very dimly printed - I have to take my glasses up and almost put my nose down to see the lines and numbers clearly).

But, perhaps it's my long time away from painting but of the twelve standard-sized paint-pots included, more than one of them are nearly out of paint. Maybe I used too much, I don't know.

However! The Craft Warehouse in Gresham to the rescue! It's at 687 NW 12th Street in the Gresham Station development. The Wife™ dotes on this store, and it's not hard to see why; if they don't have it, you probably don't need it, as far as craft supplies go. There is a section devoted to acrylic craft paints and more brushes than you can shake a mahl stick at, and it was there that I found a whole card of 16 acrylic colors, several of which correspond pretty well to the colors I'm running down on. 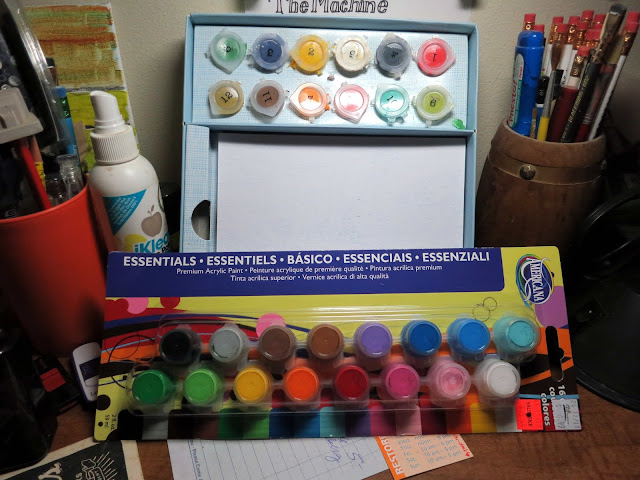 Behind you can see the twelve original paint pots in the box that the kit came in. The sixteen colors on the card, below, are beautifully fresh and pretty much the quality I need to do the rest of the PBN pictures (one hardly needs artist-quality acrylics to do these). And ... on sale for $5.44! Yes, such a deal.

Another boon I found was the Fine Art department of Craft Warehouse. Simply put, it's a fully-stocked, well-inventoried section; it could stand on its own as a small full-service fine-art supply store on its own! That's above-and-beyond for a craft-supply store, which usually has a small selection of rather pedestrian art supplies; this has graphite, oils, watercolors, acrylics, pretty much everything. So, it'll stay on our radar for certain. For an art-supply needer living east of 148th in The Numbers or anyone in the Gresham area, it's certainly a stop you'd want to make if you couldn't get in to Blick or Artist and Craftsman or I've Been Framed down in Portland.

Now, I'll move on to completing the other PBNs in that little kit you see behind it there.
Designed by: Samuel John Klein at 13:45 No comments: