[art] One Thing Bwana Spoons Did At Muse Art and Design

3185.
On Wednesday we were privileged to attend another one of +Muse Art and Design 's increasingly powerful demo-seminars. We went to one in February that I'm still unpacking, not because it's complex, but because I'm a mess. But I'll get to that one in due course. This dude abides.

Last Wednesday's event was about demoing the Acryla line of acrylic gouaches. They're good ones, and more on that to come. The featured artist was none other than Bwana Spoons, a man whose name is fun to say and is worth coming just to see him work. And he demoed the gouaches by doing so. A more complete write up is to come, but, for now, let me give you a taste of what he did do. 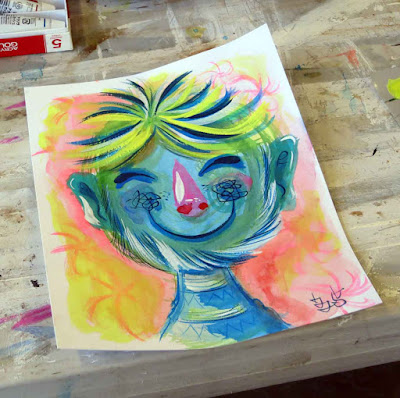 The man dances with chaos. But, like I said, more on that anon. Stay tuned.
Designed by: Samuel John Klein at 12:32 No comments:

3184.
This is the kind of vintage autos we grow out here.

At SE 122nd and Market, on the SW corner, there's a small strip center. It was anchored for a very long time by a 7-Eleven store whose franchisees, earlier this year, removed to the Milwaukie area. A Plaid Pantry (we are thrilled to learn) is going in there in its time; we know this by the OLCC liquor-license applications posted on the door. There's been minor construction activity in that old store space.

The rest of the building is home to a handful of Latino businesses; there's the most delightful tienda, where we get pan dulce to die for; a seafood restaurant called Luna Azul, and a couture shop where you can get all sorts of ranchero style mens fashions and quinceañera dresses and such. Parked out front of the tienda, there was this old-man-of-the-road, in beautiful condition: 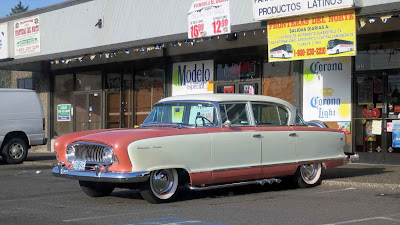 But isn't that one sweet ride?
Designed by: Samuel John Klein at 12:10 No comments:

Email ThisBlogThis!Share to TwitterShare to FacebookShare to Pinterest
Filed Under: Out 122nd Way, SE PDX Photos

3183.
I consider this the mother of all real-estate flips.

The building you'll see in the next illustration is very close to 122nd and SE Stark; it's address is 333 SE 122nd Avenue. It corners on 122nd and SE Oak. For a very long time, it's been a strip club or lounge of some sort; it's most recent invocation was a place called Soobie's, a place which was mostly responsible for low-quality food and the occasional gun battle. Some months back, it went through the traditional stages of Portland-strip-bar terminal disease; loss of OLCC liquor permit, conversion to 'juice' bar, and closure.

But look at it now. What a … conversion. 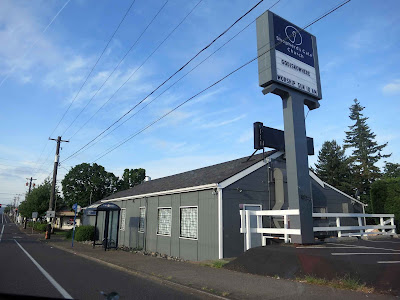 She's doffed her sexy red dress, put on more sombre, Sunday clothes … and she's now a church. The Shepherd's Gate Church, to be exact. It's not that large a building … I can't see it being that big of a congregation.

Going from a den of remarkable iniquity of a den of extreme morality must have twitched the fabric of space-time just a bit.

The most cosmically humorous point occurs on the current configuration of the new church's reader board, displayed with its existentially-tracked message perforce: 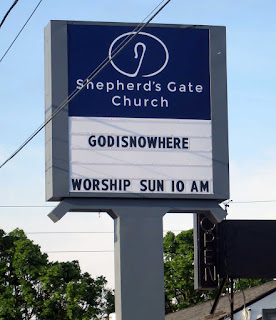 GOD IS NOWHERE seems to me to be a counter-intuitive message for a church, but what do I know from theology?

[art] #MtStHelensArt35 : Gridding Out the Picture

3182.
The object so far is to make this print into a form that I can copy. Bigger is better; you have many little details that you want to reproduce as faithfully as possible, and in order to see them well, you go big. Everything because more easy to cope with and draw that way. 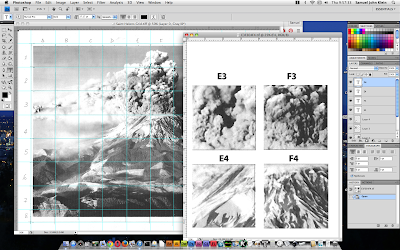 If you're doing any kind of visual arts these days, technology is your friend! The above picture shows the graphic, which I had gridded out with a pencil and scanned back into a digital file. This TIFF is then loaded into Photoshop, where I made guides along those pencil grid lines. Then, making sure the snap was on and set to guides, it was pretty easy to copy out individual squares and paste them into another 8.5x11" document, then scale up the individual squares until each was about 3 inches on a side. Each square was individually labelled so I'd know where to put them on the final drawing grid, which I've not drawn out yet, but that should be my next step … selecting the size of Bristol I want this on then positioning the grid to visually satisfy.

The grid is 10 modules wide and 8 modules deep. The squares are all 1-inch square, except the bottom rank, in which each is 1/2 inch tall and 1 inch wide. I'm holding in my hand right now a print of the E3F3E4F4 sheet, and the detail is big and lovely and reproducible.

The two main concepts at work here? 1) Lift something complex out of context, obliterate that context, and the complex tends to simplify, and 2) a big drawing like this is best accomplished the way you eat an elephant … one bite at a time.

One bite-size square at a time, in this case.
Designed by: Samuel John Klein at 10:18 No comments:

3181.
I adore the anniversary of the Mount Saint Helens eruption. So much archival footage. So available via the internet. So many gratuitous apostrophes.

Specifically, I'm going to be taking up an art project that I've attempted once already. I've printed out, courtesy of the intarwebz, two pictures of Loo-wit in full-throated roar from May of 1980, thus: 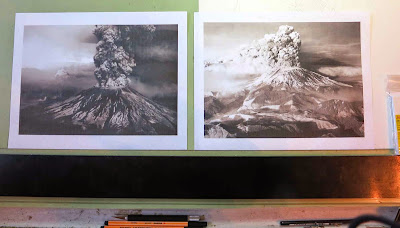 I'm going to rendering one of these in graphite, more than likely on Bristol board. The idea of these monochrome studies are intriguing and beguiling because I can picture the techniques I'd use to do it; the laying down of the graphite, the blending out, the marks I might make for details; the lifting out of layers of gray with kneadable eraser; I can see every technique I might use. I've used them all before in smaller, much less consequential drawings. I've never used them all in such concert, though.
The thing is, I'm intentionally swinging for the fences here. I will either come out of this project clearly punching above my artistic weight or making of it a beautiful failure. I don't think I can wait until I'm ready for this, though. I've got to do it now whether or not I'm ready. Cannot explain why that is, but I'm sure it's evident in one form or another, if only ineffably.
I'll post status updates as I work through the various stages, and the hashtag will be #MtStHelensArt35.
Designed by: Samuel John Klein at 20:10 No comments:

[pdx] The Past Tense of Hung Far Low

3180.
This can be found at the corner of NW 4th Avenue and Couch Street, one block north of the Chinatown Gate: 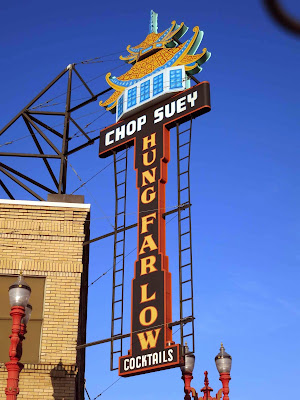 It's notable for a couple of reasons.

About half a decade back, this sign matched the reality. Moreover, it was in a sad state. That supporting structure there was of a frailty, and the whole thing had pretty much become the Damoclesian sword of NW 4th and Couch, ready to transfix and/or obliterate any random pedestrian. The sign was perforce removed and refurbished, and successfully crowdfunded back into its rightful place above that corner of Chinatown.

It no longer has neon, but it's never looked better. Close examination of the sign gives delightful continuing gifts to the viewer, from the lovingly-restored type to the delightfully-detailed pagoda architecture of the sign's capital. Like some parts of Portland, though, it represents not the Portland that is, but the Portland that was.

Hung Far Low, the restaurant, still exists. Like a great deal that used to characterize what I remember as Portland, it's removed to the more affordable part of town, the Heavy Eastside. Some say it starts at 82nd Avenue, but my dividing line is a north-south line going more or less through the summit of Mount Tabor. West of that line, you're in Portlandia; east, more the real world. And HFL is out here, now, in a low-slung building on the northeast corner of SE 82nd and Division that has vague art-deco touches and was once home to a place called 88 Hongs.

They're calling that area of 82nd the Jade District now, which causes me torn feelings, because I don't like it when things move on in this way. I decidedly like having a center of culture like this much closer to me, though in return for that I sense that Chinatown is slowly evolving from an actual name with true resonance into a insincere brand for a certain area of Portland that used to be Chinatown but really is only that in name … kind of like, at Disneyland, Futureworld isn't really in the future, it just pretends to be. Trading on palimpsest charm to attract partiers on weekend nights.

At least we still have the Republic Café and the House of Louie and a few social clubs and a place or two that still evokes the down and gritty nature that that area had as recently as a decade ago.

But how long will those be there?
Designed by: Samuel John Klein at 19:59 No comments:

[pdx] Powell's City Of Books: Where We Keep Our Excess Culture

3179.
In the Orange Room in +Powell's Books, Inc. , there's a sign near where they now stock the journals and cards and such. Here's what a part of it looks like: 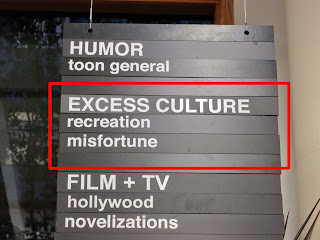 Sometimes it makes sense that there's excess culture, and it's made of recreation and misfortune, and you can find it at Powells.

This is probably the most meta thing I've ever seen.
Designed by: Samuel John Klein at 19:33 No comments: