[Out122ndWay] Cruiser's Cafe's Neon Is Back! 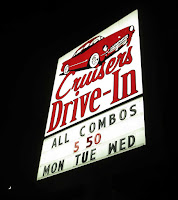 Cruiser's Cafe is a totally adorable diner out past 122nd on SE Division; precisely speaking, it's on the southwest corner of SE 136th and Division. It's been there about forty years, since the 80s, and for all that time, it's served its own version of the classic American burger-joint dependables: burgers, cheesburgers, fries, tater tots, patty melts, and the  rest, and some unexpected things too: The Wife™ says the deep-friend shrimp there are divine. Big portions, reasonable prices. Can't lose here, really.

What they've been missing is the neon on the outside. It's been visible, and visibly, sadly broken. This last evening, as we came homeward bound on Division, though, we saw it … shining out in the night like an oasis to the weary diner lover. The neon has at last been repaired. 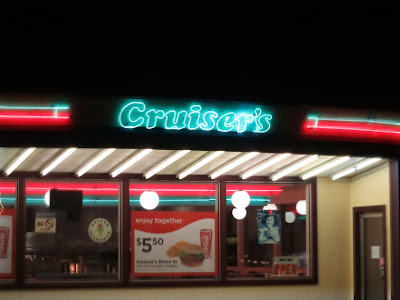 There are two levels of hot-pink-and-teal stripe; one along the roofline outside, and another along the ceiling line, inside. Both were working and simply beautiful from the street. 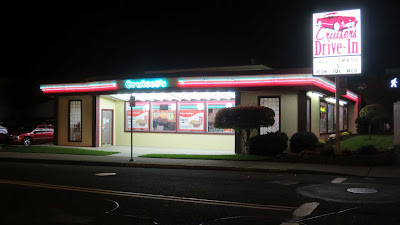 The most attractive thing to me, was the type. Looks like Cooper Black Italic; it's chunkiness gives it that old-school American diner feel. I took snaps while Wife™ stepped in for a vanilla soft-serve cone, which we shared … which was superb as well. 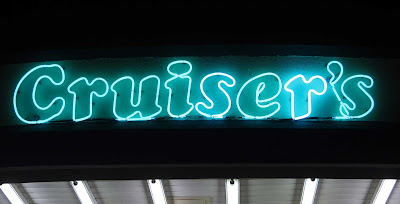 She chatted up whoever was in the building; she said they said they've been working on the funding for this for about eight months now.

Money and time well spent, I'd say.
Designed by: Samuel John Klein at 02:08 No comments:

[pdx] Molten Gold In The Skies Over Downtown Russellville

3240.
The one-way couplet that distributes east-west traffic along SE Washington and Stark Streets from SE 75th through SE 108th Avenues has its anchors in two nabes of long-standing establishment. By far the more well-known is Montavilla which, as befits its name. starts on the northeastern shoulder of Mount Tabor and is in full effect through about SE 82nd Avenue.

The other comprises the area from about SE 92nd Avenue through 108th, and has a freeway running through it. That area is Russellville, and that's my home. The areas have two different characters: Montavilla a little more toff, with a strong dash of modern Portlandia; the businesses along the north-side of Stark between 80th and 76th feature a measure of poshness that's not too hard to discern from the street. There's still the echo of the working-class there, but it's seeming to attenuate over time. Russellville is still pretty down and dirty in the good way, and real; where Montavilla has the hip late-night bistros, and the pet supply store with artisanal products, it's Russellville that has the pizza parlor, the Dollar Tree, the strip clubs, and the Target store, and the freeway running through it (I-205).

Please note I cast no aspersions intentionally. But I live here; this is what I see. And, in the manner of community, if Montavilla gets the finer stuff, that's not to say they're bad; similarly, to say that Russellville's a bit more careworn, that's not to say we're all bad either. But sometimes we get compensated in unexpected ways. Such as late Saturday afternoon, when The Wife™ and myself walked out of the Jack In The Box at SE 105th and Stark, to see the sky.

It's all in where you're standing, and where you are when you are. 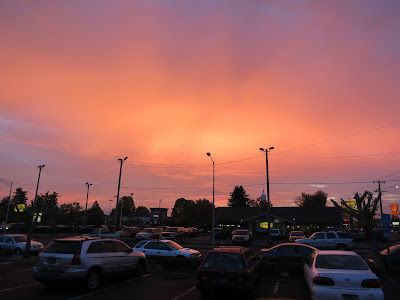 The sun, which was setting behind Mount Tabor to the west, was impinging on the clouds and not merely illuminating them from with out, but scintillating sunset rays were clearly at furious play in the clouds themsevles. 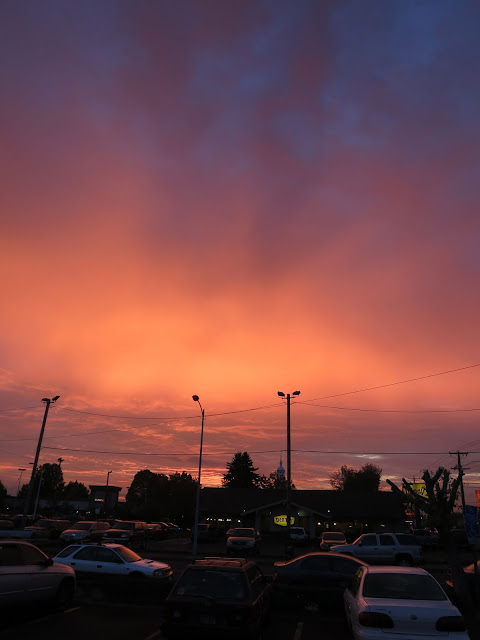 A thing like this can even make a Denny's look like a place that has a dignified view of heaven.

Meanwhile The Wife™, whose powers of observation are typically quite sharp, directed my view over the Saylor's Old Country Kitchen, the restaurant on the north side of SE Stark Street. It's famous for a 72-ounce chunk o'meat that's free if you can eat it all down at one sitting, but tonight, it was renowned for this: 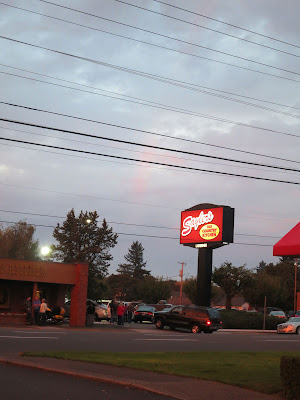 You can see it just over the sign, above it at to the left of it. The setting sun was actually inflecting the clouds behind the point of view. It's a sun-doggish, sun-bowish thing, which is a little inaccurate to say, because those effects happen totally different ways. But it's how I thought of it.

Since it's a little tough to see unaccented, I bumped up the reds and it stands out much better. 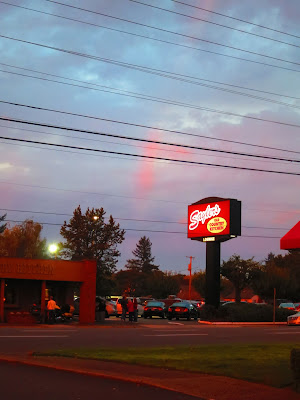