3523A.
Christine Nishiyama is an illustrator who is the foundation of Might Could Studios, and believes in community, accountability and consistent practices. This last week, she's debuted an Instagram community that may be just the note some of us under-motivated aspirers need to at least draw something every day.

As detailed in this article on Medium, Might Could Draw Today is a program of drawing prompts and sharing that offer a reason to draw through a different approach to drawing prompts, a community of friends you have yet to make, and small prizes as encouragement.

It has a few simple moving parts. Each Monday, participants are emailed a single drawing prompt. Every day for the next week, do one drawing based on that prompt and post it to Instagram under the hashtag #MightCouldDrawToday. These drawings can be dashed-off in a hurry or lingered over, in whatever style the artist cares and whatever level of care the artist deems appropriate.

That's all there is to it. Oh, and the inducement: Christine awards an art material prize each week to one lucky player. Could be a pen, or a drawing pad, or a marker.

The aim is simple: just do a drawing each day. And there is more than one mutual-encouragement based drawing community on line, but not every one has the right note for everyone. The objectives are direct: just drawing something every day, regardless of skill.

Visit the Might Could Draw Today main page at mightcouldstudios.com/mightcoulddrawtoday/, where signup for the challenge can be accomplished.
Designed by: Samuel John Klein at 17:45 No comments:

How To Draw By E.G. Lutz: The Man Who Enabled Disney

3522A.
Earlier tonight, at Powell's during Book Church, I stumbled on a couple of books by a man whose work was instrumental in giving us Disney via the public library.

Edwin George Lutz was a commercial artist and illustrator who authored several books on art and how to draw between 1913 and 1933. In 1913, the first of his books, What To Draw And How To Draw It, taught common-sense ways to render birds, houses, animals, people, and expressions in simple, cartoonish style. His 1921 work, Drawing Made Easy, showed the learner how to draw more realistic images of people and animals.

Latterly, facsimile editions of those books were produced by (respectively) LomArt and North Light Books and look like this:

The illustrations are charming, whimsical and very straightforward, clearly showing how, by breaking down natural shapes into shapes the beginner could draw, more complex forms could be built. This is a common concept that the beginning artist is introduced to; the genius of Lutz was his warm, accessable style.

The connection to Disney comes from a book published in 1920, Animated Cartoons: How They Are Made, Their Origin and Development. This particular volume passed into the hands of one Walt Disney, who was at the time making his living in the commercial art trade in Kansas City during the 1920s, under the aegis of the Kansas City Public Library. Legend has it that Disney learned his animation technique from this very book.

The result is a lesson in two things: that the chancest exposure to literature can lead to absolute wonder (what if Walt hadn't seen the book?), and the importance a public library can have in self-education at large (what if KC had an inadequate (or no) public library).

If you love Disney, thank the E.G. Lutz ... and the public library.

This article at Print magazine's website has more information on the Lutz/KC Public Library/Disney connection.

Designed by: Samuel John Klein at 07:02 No comments:

Email ThisBlogThis!Share to TwitterShare to FacebookShare to Pinterest
Filed Under: art books, cartooning, cartoonists, How To Draw

3521A.
The sticker was probably designed by Michael Bay, and its script was written by J.J. Abrams. 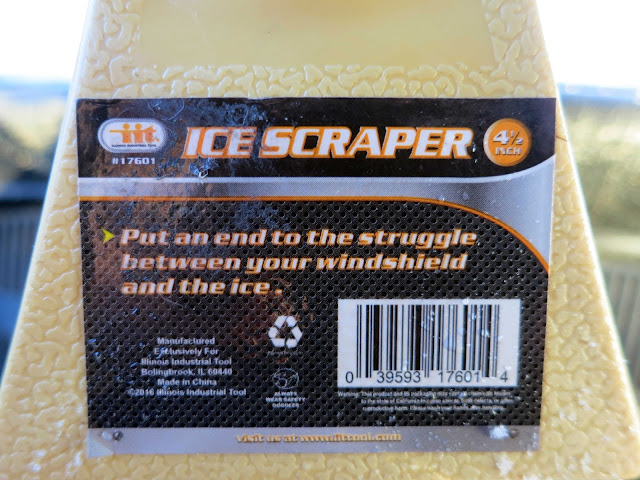 3520A.
This rather snuck up on me and took me by surprise, I'm abashed to say, but a rather historically-named street in downtown Portland is about to change its colors, rainbow-ward.

As reported by KPTV and other news outlets, on Wednesday, the Portland City Council voted unanimously to support the renaming of the 13 blocks of SW Stark Street, from Naito Parkway to where it merges into West Burnside at SW 13th Avenue, to "SW Harvey Milk St".

It's a change that's appropriately placed. For a very long time, the three-sided area bounded by SW 11th, SW Stark, and West Burnside was the hub of Portland's gay culture with popular nightspots like the Fish Grotto, the Red Cap Garage, Boxxes, and the Club Portland. Back in the day, some of those I knew called it the Pink Triangle, and it was gritty old-Portland. Today, it's the West End, the Fish Grotto's gone, the Club Portland has been McMenamized, and the old Ben Stark hotel is the modern-friendly boutique Ace Hotel. But the one axis all these had in common was SW Stark Street.

The change isn't yet quite in the bag, but it's very likely to happen. It has the support of the full City Council, as well as endorsement by more than 75 per cent of the businesses along the street. The rest, apparently, is all process.

My feelings are mixed about this, of course. The words I heard used on the radio and in the news defined Portland for me long before I lived here; geographically, the phrase "Southwest Stark Street" has a resonance that means purest Portland to me. But I'm not afraid of the name change, and expect to welcome it; and, as I said before, there's no place in Portland more apt for such a memorial.

Best of all, for those who would that a pillar of early Portland not be forgotten, this change applies only to Southwest Stark Street. There will still be more than fifteen miles of Southeast Stark Street, and the bits of West Stark that extend out into Washington County.

The Harvey Milk Street Project has a web page here (https://harveymilkpdx.org/), which may be read.

Designed by: Samuel John Klein at 10:37 No comments:

The Campaign Stickers For Colossus/Guardian 2020 Have Arrived ...

As any designer or artist I imagine would tell you, it's one thing putting together a work of art, commercial or otherwise. But to have someone produce it so slickly, especially since you love pop culture and being a part of it is a real high - well, that's truly something other than else.

A few missives ago I explained how the Living Computers: Museum 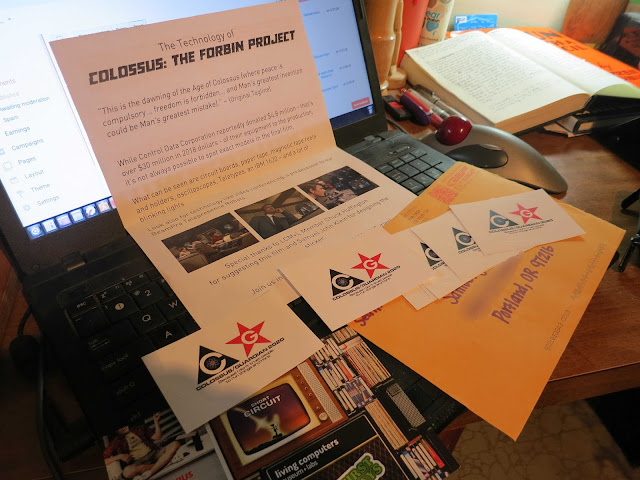 I got about ten of them. The actual sticker itself breaks out of the backing as an oval 3 and 1/3 inches long by two inches high. And don't they look subversively cool?

As can be seen I didn't just get that. A little promotional collateral came with, including a handout that illustrated some trivia pertinent to the movie. And do you know what else is cool here? 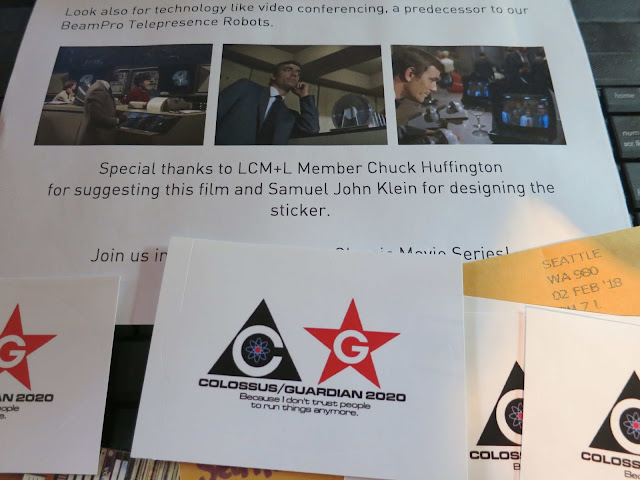 Designed by: Samuel John Klein at 11:55 No comments:

3518A.
Seen very recently, on  morning commute home from work. Location: Southbound offramp from I-205 to the Washington-Stark couplet: 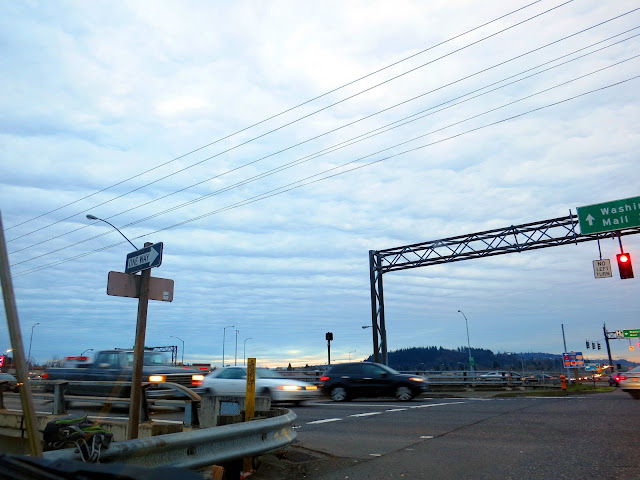 The weather wasn't particularly turbulent, although it's been cool and quite cloudly lately.

Designed by: Samuel John Klein at 11:38 No comments: