Music, Food, and Dancing in East Portland: Portlanders Stand With Immigrants and Refugees

3529A.
[Update, 19 Mar 2017: I have names to put to the Afghani dancer now and also the lady leading the Peruvian trio, for which thanks go to the lovely Sitara Razaqi Lones, who indeed happens to be the Afghani dancer. TA MUCHLY!]
[Update, 20 Mar 2017] Thanks also to Claudia Cuentas Oviedo, who shared the name of the other two thirds of her trio (see below)

Statistics show, or so I've heard, that my area of Portland, DavidDouglasLandia, Out 122nd Way, Portland's Heavy Eastside and That Part Of Portland East Of I-205, is the most diverse area of, probably, the whole state.

I think it likely. Of the places I have lived in Oregon, one seems more likely to see east Africans, Asians (eastern and western), than anywhere else. It's a real rainbow out here, and I'm pleased with this every day.

It's perhaps the ideal thing, then, that an evening celebration promoted by the City of Portland called Portland Stands with Immigrants and Refugees happened out here, at the East Portland Community Center, which stands just off SE Washington St on SE 106th Avenue. It was a simple thing, really: some great authentic food, dancing and singing by immigrant groups, and plays. It ran from 6PM to 9PM on Friday, and with only three hours there was a lot to cram in there. We didn't see everything but what we did see was delightful.

We enjoyed the food there (the wife had a chicken shawarma wrap and I had a beef burrito and both were immaculate) but there was a wait, but we couldn't be too sore; I knew the event was probably going to be popular but I had no idea it would be thronged.

The main event for us was the signing and dancing in the gym. I was at the end of a long day myself, but there was much happy energy and it kept me interested. Me and The Wife™ were both enchanted.

The first performer we saw was a lovely Afghani woman, Sitara Razaqi Lones, who did a passionate folk dance. 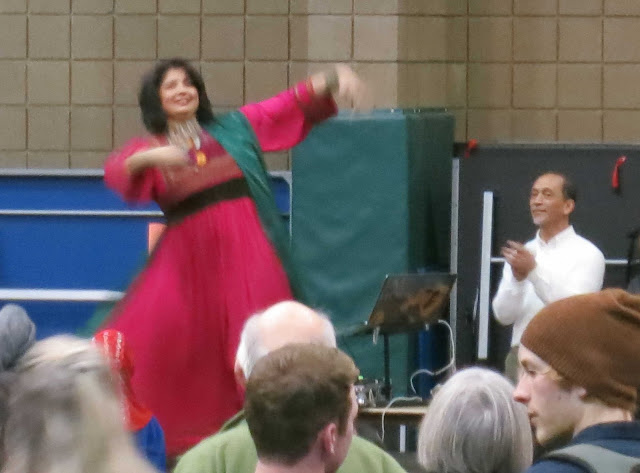 As the dance progressed she really got into the zone. The costume only added to the positive energy. 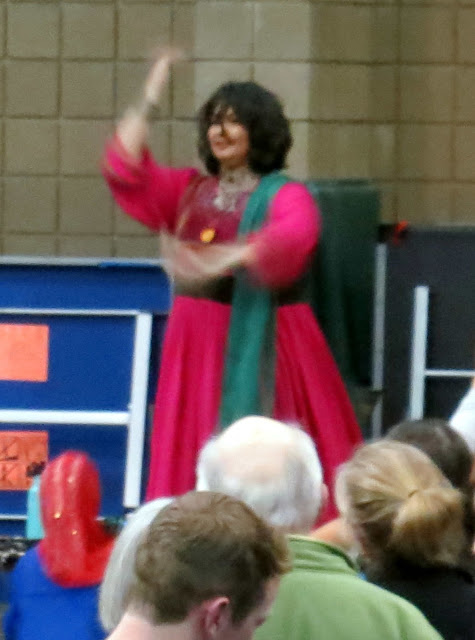 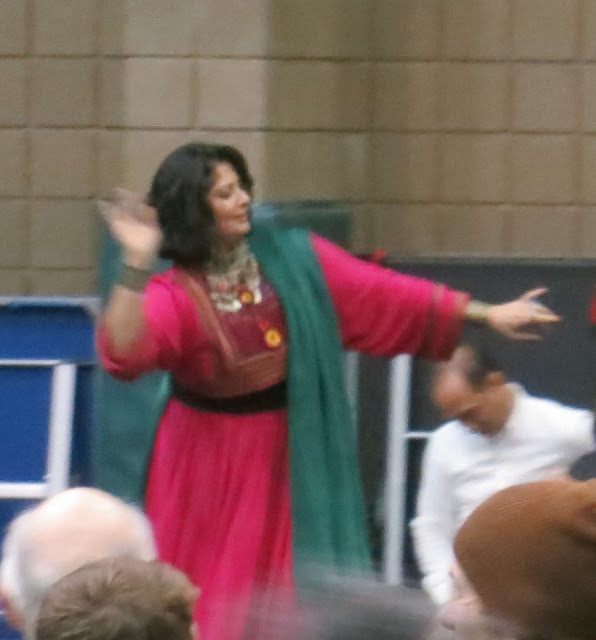 After that, a trio, led by Claudia Cuentas Oviedo, played Peruvian music, accompanied by Tanya Abernathy and Otto Gygax. The support system, a Mac laptop, was reluctant to come on board (at least that's what it looked like), so, when you're a creative performer, what do you do?

You get out the pretty flute and play. It worked. 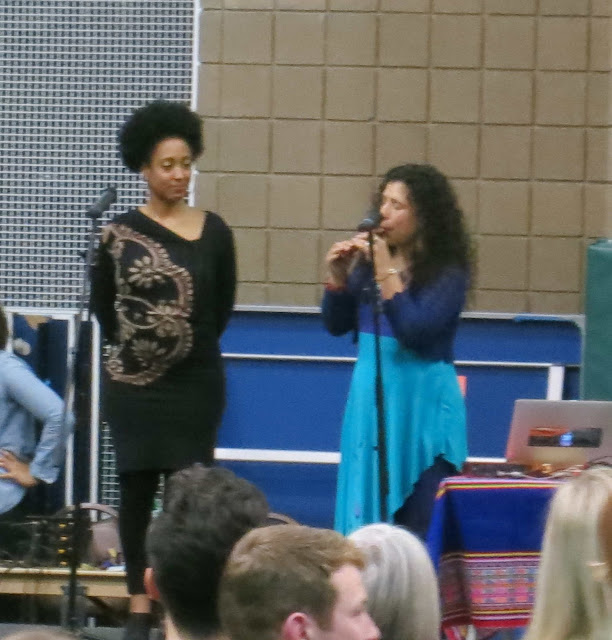 But when they got underway, they were on. 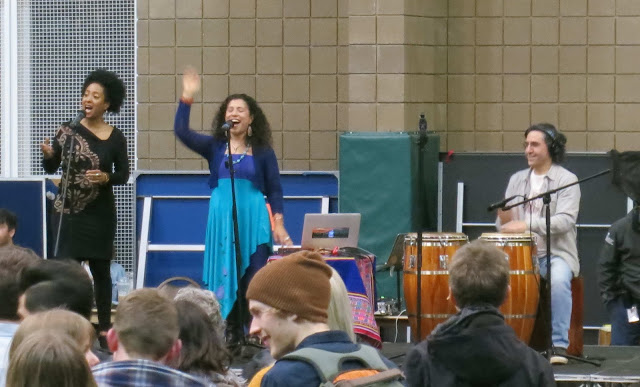 After that, we were treated to some really energizing Bollywood style dance. I was remiss in that, due to acoustics, I couldn't get a clear idea of who the other performers were, but thanks to the book of Face, I was able to figure that the dancers were led by Prashant Kakad, supported by dancers including Blake Schrein, Brittany Newton, Jasmine Jaramillo, and Kathy Nordskog. 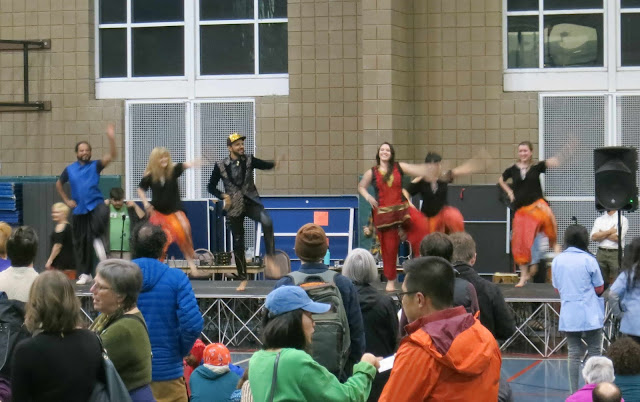 Prashant is that stylish fellow in the ballcap in the middle. They had an energy that was infectious, and I can only speak for myself here, but watching a group of dancers like that doing such enthusiastic moves in such great synchronization is infectious, inflecting the spirit with happiness and causing even the most weary spectator to at least, at least, tap the foot and move while seated. 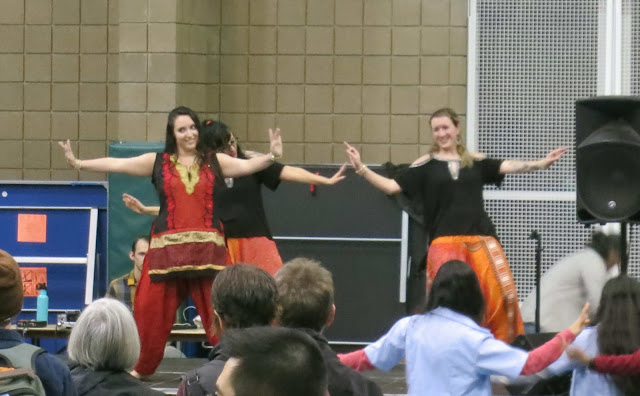 They looked great, they made one feel great, and when they got the crowd involved ...

... they really got involved. Everyone on the floor, regardless of who they were or what they looked like, looked good, looked beautiful. Art really connects. 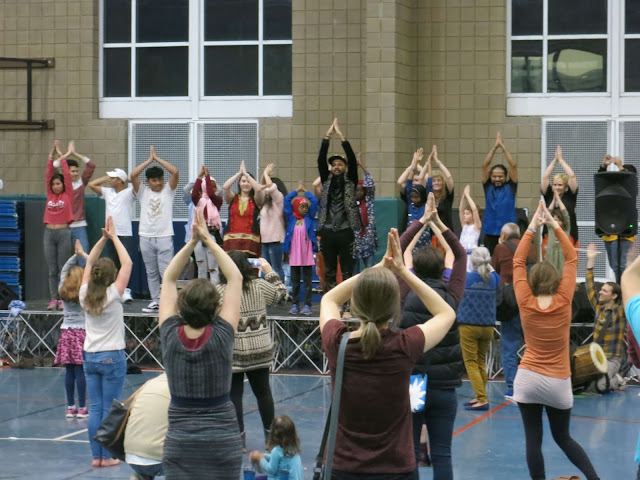 And when they finish on a high note, everyone else gets to be there with them. I couldn't not feel glad I was there.
Designed by: Samuel John Klein at 15:35 1 comment:

Wy'east: The Sun Rising From Behind Larch Mountain

3528A.
Now, on Friday morning, we return to this blog's national pastime: photographing Wy'east from the Rossi Farms, now having moved our POV to NE Shaver Street east of 122nd. A massive rethink of the bike lane situation on 122nd between Fremont and Shaver has eliminated all parking in that segment, including the spot where I parked Olivia, just by the entry to the Rossi driveway.

But it's still a good view. 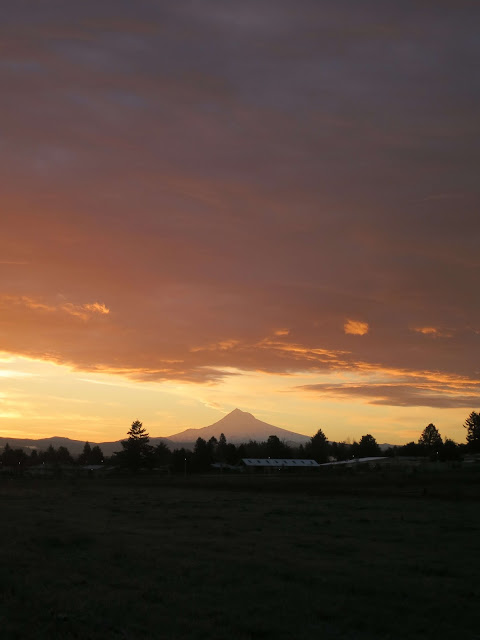 The most entrancing feature of an atmosphere like this is the way the clouds form such a solid ceiling, seeming both to absorb the light streaming in from the east and to defliect it down. Also, the sunrise brings unexpected features out; note that some of the foothills are dark and seem to screen the sunrise light back toward the volcano itself, like a sort of divider.

This gives the vista. The bright flare behind the rise on the left - Larch Mountain - heralds the rising sun. The way the foothills screen out the sunlight and redirect it to a glow that subsumes Wy'east is quite clear, as is the delightful low clouds in front of all the foot hills, which is visible in front of Larch Mountain. 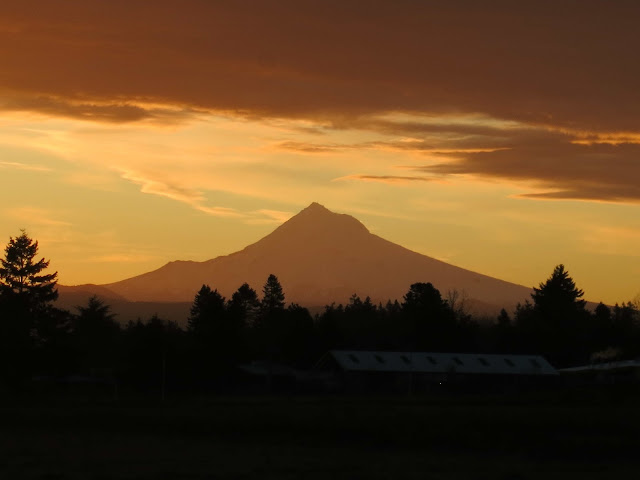 The mountain sits bathed in dawn sunlight that the foothills in front are going to get, just not yet.
Designed by: Samuel John Klein at 13:44 No comments:

The sunrise was particularly wonderful. There were clouds, and they were catching the long rays of the rising sun in that way that never fails to get my attention. 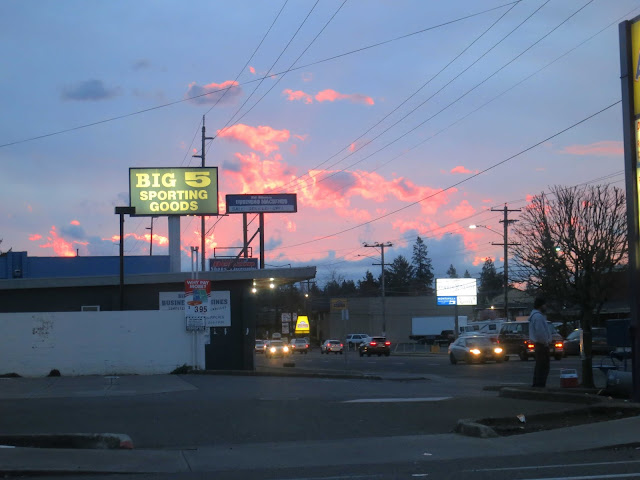 That's looking east down Stark, of course. The next one, looking south down 122nd, up the rise just before the Library. 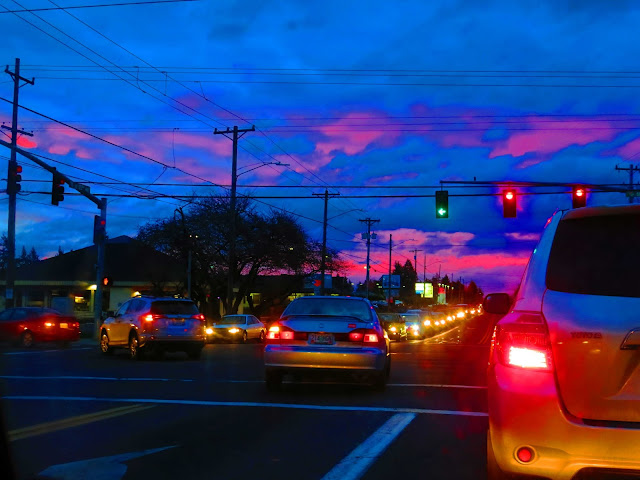 The first photo was unretouched. I bumped the color on the second one.
Designed by: Samuel John Klein at 13:07 No comments:

3526A.
Been quiet around here of late, but about 1/2 mile west of where I work, there was a BIG fire. Old auto boneyard near NE 75th and Killingsworth. FIVE alarms.

Killingsworth closed west of 82nd. I took this picture from just east of 82nd. 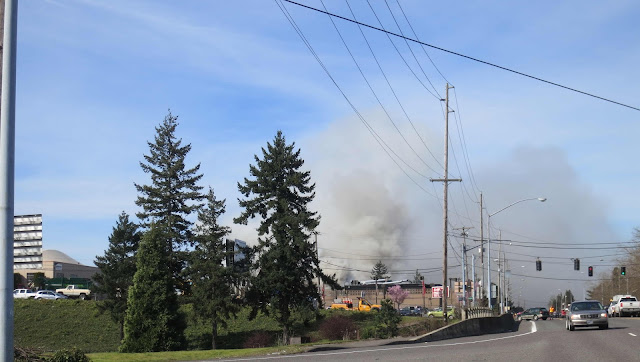 As of now, the Portland Fire Bureau has a 1-mile 'shelter-in-place' zone centered on that wrecking lot. Mayhap I got out of there just in time.
Designed by: Samuel John Klein at 12:38 No comments:

Email ThisBlogThis!Share to TwitterShare to FacebookShare to Pinterest
Filed Under: liff in PDX

Manga Explains: Why Ink On Bristol Board?

3525A.
A couple of weeks ago prior to Book Church we stopped in at the Portland Blick Art Supply store, located and NW 10th and Glisan, and had a look-see.

While there, I had to get a photo of this inspired explanation of why Bristol is good for ink, because it uses a whole lotta manga tropes to explain it plain and clear, and is just plain fun to look at. 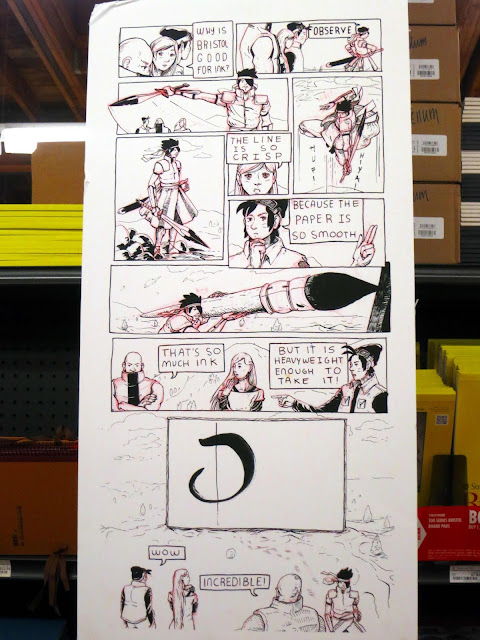 When I do draw, I adore Bristol, for whatever that's worth.

If you looked real close, you could see the pink lines of the rough layout. There's not too invisible here.

Designed by: Samuel John Klein at 10:52 No comments:

The Return of South Portland: Welcoming the Proposed Sixth Sextant

3524A.
Don't look now, but Portland may be about to grow a sixth address area.

Actually, it already exists. Anyone familiar with the map of Portland knows that the Willamette River and Burnside Street makes a basic division of the address grid into NW, NE, SW, and SE quadrants; the veering to the northwest of the river north of the Burnside crossing creates an ample area on the North Portland Peninsula which is named, simply, N, and these areas form the directional part of every street name in town.

South of the city center, though, starting at about SW Jefferson St, the river dawdles more south-southeast rather than straight south. This is a topic I wrote about here back in 2005; and while the addresses increase southward in accordance with the southward address trend, you reach a point at which the zero-line ... then, SW Front Avenue, now SW Naito Parkway ... is actually several blocks east of the river. Rather than dubbing a new address district, back during the Great Renaming in 1930-33, the address planners counter-intuitively called for addresses to increase 100 to the block again, as you traveled toward the river, but with a leading zero affixed. These addresses I termed the zero-hundreds, but the term of art in the City is leading-zero addresses. Why they decided to take this approach rather than a mirror-image of the North Portland scheme is not recorded and presumably forgotten.

As an example, the home base of Portland's legendary The Old Spaghetti Factory, at the end of SW Bancroft Street, on the river, is 0715 SW Bancroft St, effectively seven blocks east of Naito but on the west side of the river, so SW.


It seems incredibly likely that that's all about to change in a local geography edit that, while is not as major as the original Great Renumbering, is quite remarkable and unprecedented in Portland's post-renaming street rationale. If approved by the City (and judging by the amount of work already done it looks quite likely), in 2020, the slender wedge of land with leading-zero addresses beginning just south of the Hawthorne Bridge and expanding to about a mile's width by the time you cross the Clackamas County line will lose the W in the directional and the leading zero in the address number. The Old Spaghetti Factory's address will become 715 S. Bancroft; Johns Landing's main drag will be known thenceforth as S. Macadam Ave, and SW Terwilliger blvd south of Lewis and Clark College will be S. Terwilliger Blvd. The PBOT 'Sixth Sextant' logo schematically summarizes the change, which was apparently catalyzed by the growth of a major urban neighborhood in the South Waterfront area and the collateral issues of city service and emergency service provision in an area where a caller will say "300 SW Whitaker" when they meant "0300 SW Whitaker".

If and when (let's be frank, or at least Meier & Frank ... when, this looks like a done deal) the change is applied, the new South sextant will come into being affecting 258 of Portland's estimated 19,502 street intersections (interestingly, I found that my home 'sextant', SE, has more than 6,600 of those intersections, about double that of the second-largest, intersection-wise ... SW).

I expect I'll embrace it with some excitement, though I'll have to admit that "South Macadam Avenue" doesn't have quite the ring "SW Macadam Avenue" did. And, though blander in character (the originally-named area was something of a center of lower-income and poor European immigrant communities) there is the thing that there will be, at long last, a real South Portland in Portland, Oregon.

Also, a tip of the hat to my incomparable friend Friday, who knows what I like and how to get my attention about it: she pointed me to this The Oregonian article and the rest, as they say, is Address Nerd history: http://www.oregonlive.com/roadreport/index.ssf/2018/02/sixth_sextant_city_considering.html
Designed by: Samuel John Klein at 10:10 2 comments: