Technorati Tags: War of the Worlds

Designed by: Samuel John Klein at 09:35 No comments:

[art] Painting a Space Scene: I Am Not Putting A Bird On It.

2560.
Me and acrylic painting have rather discovered each other.

There is a book by artist Michael Carroll called Space Art. I found it at the Multnomah County Library, and as I am addicted to how-to art books, I checked into it. When I did I found an amazing thing: the spreads, instructions, and photos are amongst the clearest and explanatory I've seen yet. They were so good, I could actually see myself doing the steps, and when book-based instruction is that good, you know you have to try it.

So I did. The Earth From The Moon is the first project in the book. Here's how mine turned out: 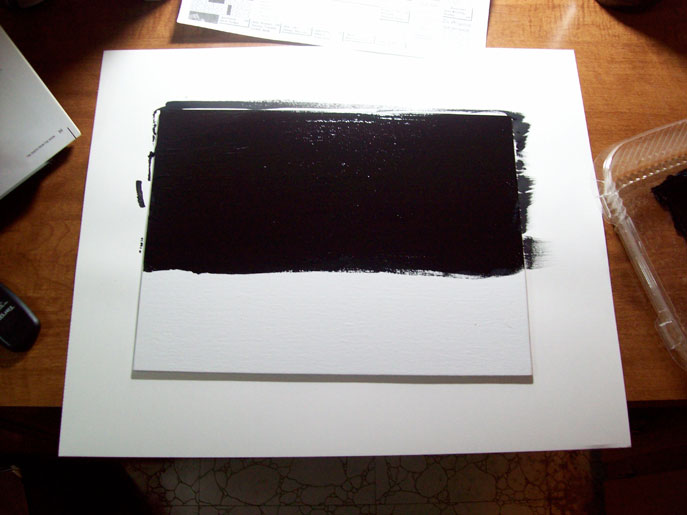 That be a nice thick coat of M. Graham "Mars Black" (no, no Moon Black, sadly).

2) Lay in the base of the Earth 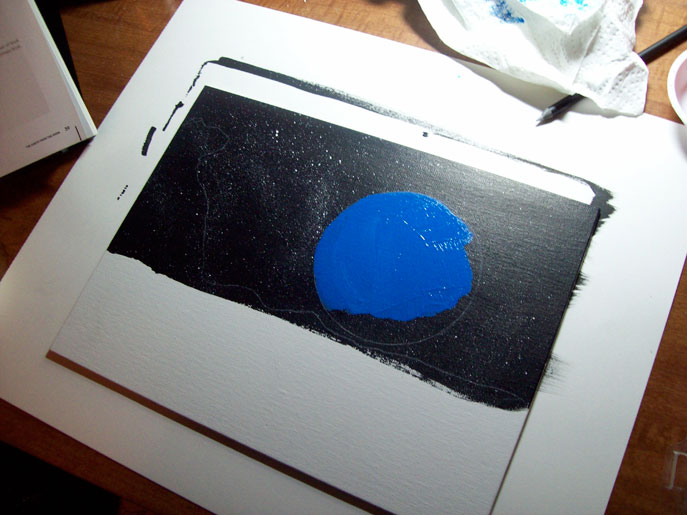 The Earth is depicted a little bigger than it really would be for effect's sake and to make it a bit easier to paint. Just before this I'd flicked a nice rich starfield onto the black sky with a toothbrush. It's like being back in sixth-grade art class again!

3) Blocking in the Lunar landscape: 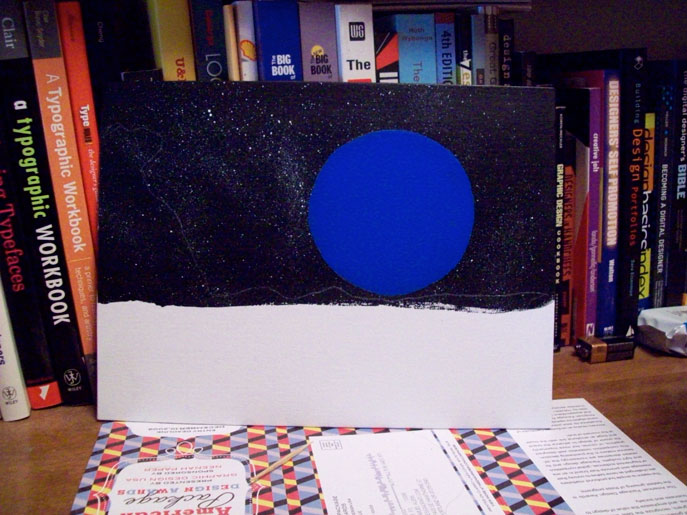 The great blue ball looms: a white pencil line traces out the hillside and the horizon.

4) Filling in the Earth and establishing the Lunar landscape: 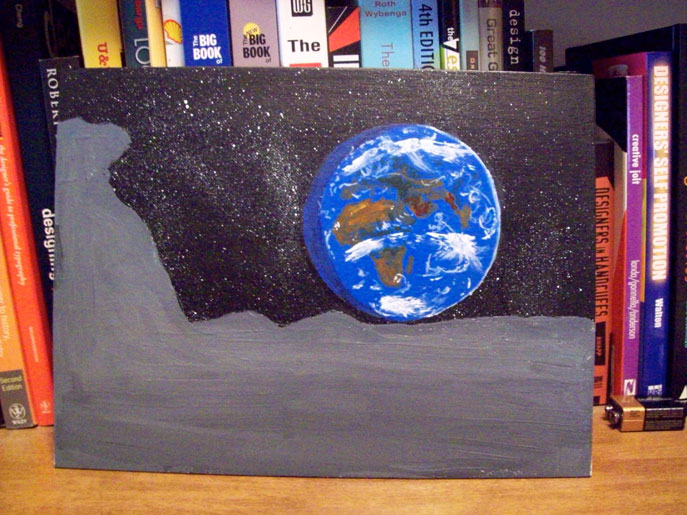 Things started to get complicated about there. The continents were painted in in hints, then white paint was used to indicate clouds by dragging it here and there with a sponge. It is something I was completely new to, and though I don't completely like the result, the sum total is definitely more than that of the parts. I gained a great deal of experience here in what to do and what not to do: what brushes to use and what I might think works better next time.

A gray was mixed for the lunar landscape. Now I lay that in.

4) Rocks and such with sponges: 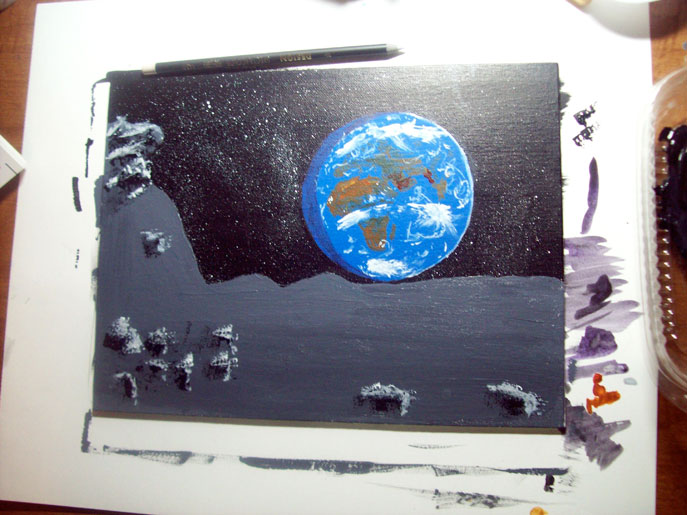 The rocks and the white highlights were laid in with sponges. I am finding that I have a lot of learning to do in using the sponge for satisfactory results. Could be worse, though; I am a beginner, after all. 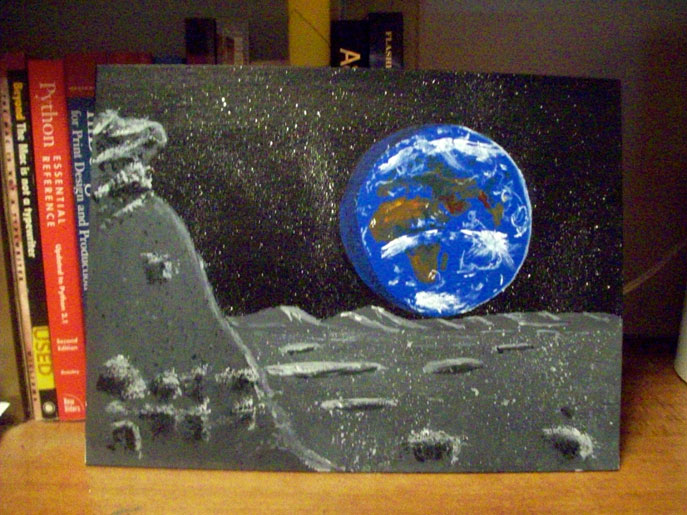 5) The finished work. This artist has a long way to go until he's mastered lunar craters, and the landscape on the left isn't all that convincing, but the hills in the distance give the perspective and the feel I was looking for.

My first outing with acrylics, my first artwork in far too long. It shows my rusty spots, but I got it fairly close to what it should look like. I also find I'm enjoying acrylics a lot more than I thought I would ... and am not nearly as intimidated by them as I once was.

Designed by: Samuel John Klein at 09:43 No comments:

[liff] The Company I Keep Get Acting Jobs In "Portlandia"

2559.
The Fred Armisen/Carrie Brownstein epic Portlandia is all the rage, as it should be. I just saw the "Farm" episode on hulu, as most of us have, and loved the overarching story … which is the damndest shaggy-dog story you ever saw, hitting some PDX-tropes so hard they get levelled.

One sketch I'll always remember, and not because it's so weirdly funny. The last full sketch, the 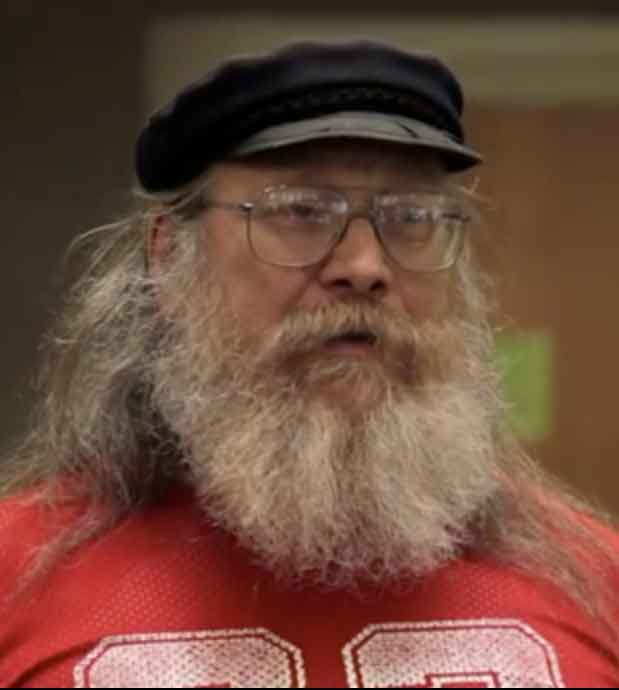 hide and seek contest, has, as part of its punch line, a fellow who's been "hiding since 1979", and someone I'm honored to say that I've known for years and despite this has no problems being my friend, and that's Ed Stiner.

That's a picture of him over there on the right. He is a nice guy, and you'd count yourself lucky o know him, and to see him in a commercial here, a bit there, and an utterly cool bit of comedy like Portlandia … well, a lot of us who know him always knew he had the good crayzee in him.

Designed by: Samuel John Klein at 10:24 No comments:

Email ThisBlogThis!Share to TwitterShare to FacebookShare to Pinterest
Filed Under: liff in OR, liff in PDX, teh_funnay, This Modren World

[liff] Gerry Rafferty: He Put Something Better Inside Of Us

2558.
When news of Gerry Rafferty's death broke, last week on Tuesday, I was in the Multnomah County Library, perusing Twitter.

For those of you who'd diss the Twitter, give it this: most of us so-connected knew right away that a talent, perhaps the greatest underappreciated talent of the latter half of the 20th Century, was no longer with us, and it was a different world now.

Oh, you'd not think him underappreciated. After all, who hasn't heard the famously-searing sax solo that underlines that sparkling exemplar of late-70s progressive rock (oh, we called it "soft rock" back then), "Baker Street", from the famous City to City album.

That album means so many things when one stops to consider Gerry Rafferty's oeurve. Three years earlier, the promise contained in the English-Scottish electrofolk group Stealers Wheel had been broken in a devolution that left Gerry unable to release music due to legal and contractual obligations. Gerry, a Scotsman living near Glasgow was (as the legend has it) shuttling unrelentingly between Glasgow and London - city to city - trying to ply his craft and untangle his entanglements. Legend also had it that he had little love for the south of England, preferring his northern, Glaswegian haunts. The tension of going to and fro and dealing with life's unpleasantries thereupon are written all over City to City, if you look closely. 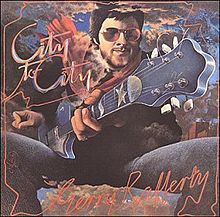 theme which surfaced time and again, in songs like "A Dangerous Age" (from the 1988 album North and South) and "Sleepwalking", (1982's Sleepwalking), which pretty much matched his ambivalence about performing live - those of us Rafferty fans in the USA were destined never to see him, as he apparently disliked touring, and certainly not across the ocean.

Still we Rafferty fans kept the faith. There's really nobody, before or since, who could turn a song out like him. When Quentin Tarantino "rediscovered" Stealers Wheel for that shambolic scene in Reservoir Dogs, Rafferty and Wheel fans all over the Western world wondered what the hell took so long for anything Rafferty-connected to become hip. We were always on board that train, you see (the musical one, not the evil-man-in-cheap-suit-cutting-off-a-cop's-ear one). 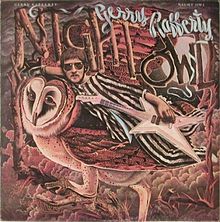 They say you never forget your first. Same's true here. Before the year 1979, when I was but a neat thing, as they say, I was more of a music filter. A child of top-40 radio, I enjoyed the poppy stuff, the tunes with the hook was the thing. While I had bands I preferred, I had no favorite artist. But then I heard "Baker Street" (which pioneered the idea of the sax solo before every other artist of the day beat the life out of it), and "Home & Dry" (an unusual synthpop march from an electric folk artist, and still the most favorite song I've ever heard) from City to City, and I did something I didn't do ever until that point - I bought a real album.

33 and a third, baby! And I put it on my stereo (that's what even we young folks called them then) and treated myself to an album that changed everything I thought about music, from the fact that now I knew what it was like to follow a single musician to the idea that you didn't have to wait on the radio anymore, hoping your song would come around.

I may or may not still have that original 1978 disc. If I do, I'm sure I'll find that I've played most of the grooves smooth.

Gerry wasn't only a player whose every song pleased me, he's someone who liberated me in a way. Introduced me to a larger world. 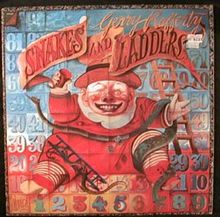 For me, the real key to having any Gerry in your collection - and I think the sign of an evolved music-listener is to have some - is to have the three albums of what I call his "70s Trilogy" in your collex. Those are City to City (1978), Night Owl (1979) and Snakes and Ladders (1980). Those three aren't thematically related other than Gerry's general style, but they seem posessed of a similar tone and polish, and are visually united by the unique style of Scottish playwright and artist John "Patrick" Byrne, so for me, as to age and approach, they hang as a unit.

From there, I'd suggest getting a Greatest Hits disc - those are comparatively easy to find these days, those old albums not so much - and you won't have to wait to get Sleepwalking, North and South, et. al., to hear some of his later gems. From there, lateral over to Another World (2001), which was his last original album (Life Goes On is rereleases and radio edits, though that's worth it because Gerry's versions of the hymns Adeste Fidelis and Kyrie are pure honey for the ears and properly cathedral-esque) and will clue you in on exactly how, just like any great Scotch, Scotsmen too age and attain majesty over time.

It's to all our regrets that there will never be original Gerry ever again. After a life of strife and alcohol, he died (it shouldn't need to be said) too young at age 63. Another World proved to me he had a ton of music left in him and we'll never know how good he'd sounded.

And I cannot resist the temptation to say that his liver departed him over artistic differences, or after years of dreaming of settling down and buying some land it appears he's done just that at last. I am mourning the passing of Gerry Rafferty but, in a contrary way that seems right somehow, with joy. GR's songs are on heavy rotation in the house here, and they all carry with them their joy - Gerry had many moods, but they were all colorful ones and even the saddest songs he played seemed to have some crazy, cockeyed joy woven through them.

And they never sound old or dated. That, my friends, is true magic.

Designed by: Samuel John Klein at 19:02 No comments:

2557.
Why? Because the oft-renamed and apparently now-disemvoweled STRFKR's upcoming album Reptilians has it already, and January isn't even one-quarter done. Here's but a slice, for illustrative purposes: 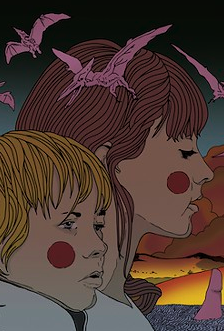 Visit PMerc at the article here: http://blogtown.portlandmercury.com/BlogtownPDX/archives/2011/01/05/everything-you-need-to-know-about-the-new-strfkr-album-in-one-handy-post and you can see the wholeness of it, including a pre-released track which is actually quite nifty and causes me some interest in what else they have on it.

Seriously, I might get this one. And I don't usually care for new bands.

Designed by: Samuel John Klein at 13:45 No comments: