3247.So, last year I created a calendar with all-original images created by me. It didn't sell too well … perhaps because I waited until the latter part of January to get going to it.

I've learnt my lesson. Here, for everyone's delectation, edification, and, hopefully, interior decoration, is the 2016 version, available before the year in question actually starts! This is an innovation in calendar technology that took up to 8 to 10 seconds to work out. The results, of course, are stellar.

Seriously, though, here's my beloved home town through my own eyes and the eye of my camera. It's a labor of love … Portland's going through a lot of changes, but she's still the beautiful woman I remember from all those years back. I'll love her 'till the day I kick it.

And, here's a preview:

Designed by: Samuel John Klein at 03:26 No comments:

3246.
As a matter of fact, The Big Lebowski is one of our favorite movies. But, that's as maybe.

We live in an area of outer east Portlandia where the schools fall under the historic name David Douglas. School geography in Portland is a curious thing. The Portland Public Schools … in, what one would imagine a nominal sense, the school district covering the City of Portland, is not, in fact, the school district ones' kids go to if they live, in the main, east of Interstate 205. You can still be in the City of Portland and not pay property taxes to PPS, a fact which endlessly amuses me when I see them talking about Portland school taxes and strife on the school board and I have to take a moment to remind myself that this does not apply to me out here out 122nd Way.

Though we don't take part in much of the David Douglas social whirl, being night owls of necessity so long it's become nature, we do take pride in being part of the David Douglas community. It's the kind of place you find yourself in that you realize, after being here a while, that you were meant to be here all along. It's also has the reputation of being the most economically and culturally-diverse community in the city.

Portlandia, as funny as it is, was not written about the Portland I live in, the Portland of eastern-European churchgoers who walk to church and never step out in anything but their best to so much as go to the store; the Portland of Somali housewives who step out dressed int the brightest colors you can imagine; the Portland where all we have to do is walk down the street and around the corner to get authentic Mexican pan dulce from the tienda.

And there are famous people who come from here too. Last week, we attended the David Douglas Holiday Bazaar, held in the North Campus building in the halls and the cafeteria, and there were the usual throng of convivial people, all very nice, handicrafts and wooden toys and witty artifacts and all, and I don't know why I never noticed it before, but over the main hall past the school offices are photos of the student body presidents gong back more than 60 years. Particularly interesting is the one who graces 1962. He went on to Hollywood; made some good movies and TV, and played the enigmatic center about which Lebowski really revolves (and has hence been abused as a meme to the point of meaninglessness), and even though he was born in Sacramento, he appears to claim the Rose City as his home (and David Douglasville claims him as a homey) and he still came home to visit his then-going-on-97-year-old David Douglas mom (and visit an alternative newsie or two). 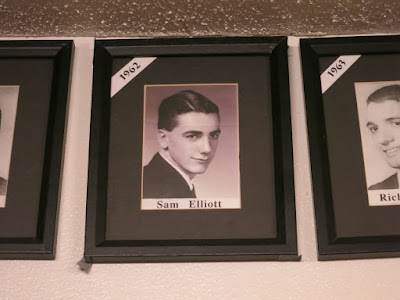 Sam Elliott. Being rather smug about being a Sam myself, I feel lucky to be a namesake with such a fellah.

The Stranger abides, man. And he's one of us.
Designed by: Samuel John Klein at 11:50 No comments:

[liff in OR] Portland In The Time Of Flood

3245.
The counter on the Acu-Rite weather droid for rain, while I do love this little guy, is flawed. It doesn't reset itself after the water year ends. It also appears to top out at 99.99 inches. After I snapped this, I cleared the totals … you can only clear all … so we're starting out again. This was the view on Tuesday morning: 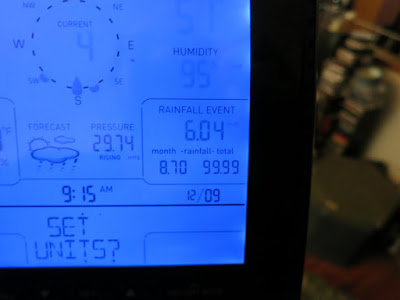 It defines rain 'events' differently than our weather broadcasters do, and it's a little inscrutable, but over this historic weekend, when sewage gouted out manhole covers in The Pearl, when Johnson Creek rose 1.6 feet in one hour on Monday morning, when Detroit Reservoir rose 17 feet in a single day, we saw 6.04 inches of rain at the Chez ZehnKatzen.

With 8.7 inches we are now statistically over the rainfall we'd expect to get in a December, and I call the rain to a halt for this month. It can all go straight to the mountains as snow.

I have spoken.
Designed by: Samuel John Klein at 10:59 No comments:

Email ThisBlogThis!Share to TwitterShare to FacebookShare to Pinterest
Filed Under: El Nino 2015, liff in Cascadia, liff in OR, Oregon rain

[creativity] A Look Into A Writer's Brain. DeNiro Knows.

3244.
The quote says quite a lot without saying all that many words.

What DeNiro is attributed to say here can probably felt to some degree by a great many of us who are artists, and the part of me that aspires to writing as well as that which aspires to drawing feels each one of those; moreover, perversely, it thinks that those things are actually my more charming points.

And that is on a good day.