2934.Let it never be said that William Shatner doesn't know how to ride that pony.

Seen on some page somewhere: 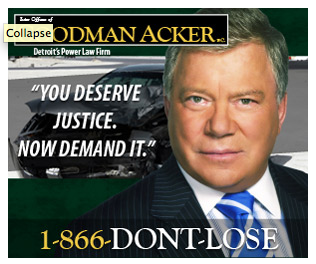 Admit it. You just read the whole ad with Shat's voice doing the voiceover in your head, didn't you.

You did. You did.

Don't try to deny it.

[liff] The Age Of Needy Condiments

I'm starting to think this recombinant-this, GMO-that food thing is getting a little out of hand.

Now, The Wife™prefers I eat fewer bacon bits because they're a nutritional (or lack thereunto) hit. I'm eat less of them because I don't like food that introduces itself 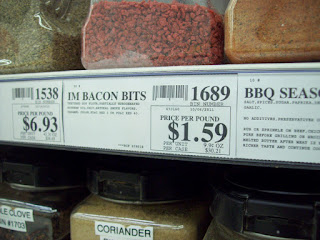 Well, hello, bacon bits, I'm Sam. Nothing personal, but I'll just hang out with the cauliflower for a few, okay?

Why, yes, yes you are. And adorable too. Honey? Do we still have visitation rights with the Parmesan cheese?

And so it goes.

Designed by: Samuel John Klein at 22:31 No comments:

Email ThisBlogThis!Share to TwitterShare to FacebookShare to Pinterest
Filed Under: liff, teh_funnay, This Modren World

2932.This one came in over the transom a little while ago and we put it aside until … well, whenever.

Seeking something somehow, it was decided that the time was ripe to rebrand the company that lords over the great studio 20th Century Fox (as well as other properties that we shant mention here). To be sure, seeing the tag line A News Corporation Company over the classic title card design of that movie studios logo was always a bit dissonant; even if I admired News Corp, the dryness of the name against the lush history of the 20th logo sounded a discordant note.

So, with this presumably in mind, and things being what they are in the industry, and with the news companies due to be split off from the entertainment companies (sounds nice, but considering the source we don't expect much improvement) Mr Murdoch commissioned a mission to updated the News Corp's image. Money was spent; hours were burnt, gods and men were born on the boardroom table, but mostly, money was spent. And what do we get in return?

We see what you did there. Now will you switch off the klieg lights so I can go back to sleep?

We note that this is going to be the name of the new holding company for 20th Century Fox. They are not changing the studio's name, which would be foolish really.

Gizmodo has some cogent things to say as well.

Onward, ever upward.
Designed by: Samuel John Klein at 19:31 2 comments:

2931.Just stumbled on this delightful thing that sadly didn't get the attention it needed or they'd still probably be putting things up: it's a blog called The Burnsider, published by a couple of folks who walked across the Burnside Bridge to go and come from whereever it was they were to wherever it was they were going in the day.

It published only four months, during the year of May 2005-May 2006. But there are these clever little glimpses there. Here's one I hope they don't mind me using: 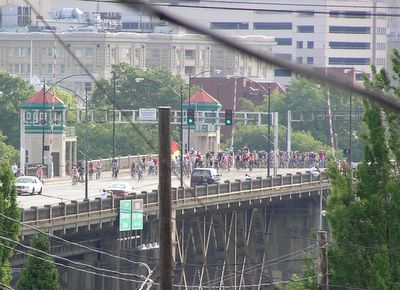 … which proves they have the eye for the long view.

As blogging has evolved over the past half-decade or so, the proliferation of local photoblogs have been less proliferious. I am sad for this.

http://burnsider.blogspot.com. Go there; surprise 'em. Leave a comment or two. Imagine the delight as they check the inbox.

We salute you. Burnsider.
Designed by: Samuel John Klein at 19:08 No comments:

Yeah, that's Portland … the one we love, after all, out here on the Heavy Eastside, the part that Portlandia-watchers think is the edge of Gresham. We have a lot to say about being Portland, but that's all for another channel and time; in the meantime, look at what happens when we Heavy Eastsiders throw down and party.

We ourselves kind of stumbled on the event. The Wife™ and The Lodger™ were out along SE 82nd Avenue the evening before and saw that 82nd between Division and Holgate was going to be closed for a parade from 10 AM to Noon the next day (Sunday AM quarterbacking: they could have promoted that a little better).

So it was that Saturday morning, a few hours after getting off my overnight-shift job, we find ourselves near 82nd and Powell, in the old Powell Street Station shopping center, parked with the old Subaru nose-out under the center's sign, and happily unpacking our chairs.

It was a damn' fine time. We didn't actually sit down. The Papa Murphy's at 82nd and Powell were giving away free half-slices of pizza. They didn't have to sell us, we love Papa Murphy's; but still, the free pizza sample was most welcome.

One of the reasons it's taken so long to get a posting up about this is there are so dang many pictures I took! The best I can do here is bring you a 'best-of' … there was much to see and much to drink in. It was, in every way, a good-old-fashioned American parade, Portland-style, and all that this implies.

This next photo is for those of you cozy-catastrophe fans. This is something you'll never see, I can guarantee you if you're any sort of 82nder; The Avenue of Roses, looking north from Powell Blvd toward Division Street, the top of that far rise, about a mile away, devoid of traffic.

Set Omega Mannish Chuck Heston racing down the Ave in a permanently-borrowed sports car, and you'll have it just about right. 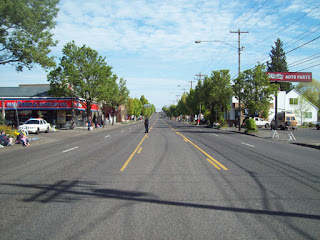 One of the first acts to cross our field of vision was a group of drum-n-bugle corps types out for one last go-round. They were quite delightful and casual about it, out for a good time. They looked like seasoned veterans. 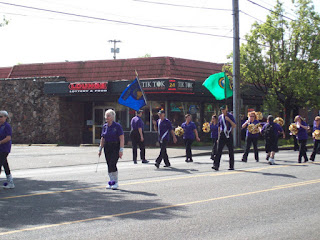 There were a couple of acts that verged on actual flotation. This display, from the David Douglas Historical Society, speaks to our two biggest crops that are grown east of 82nd: trees, and active volcanoes. 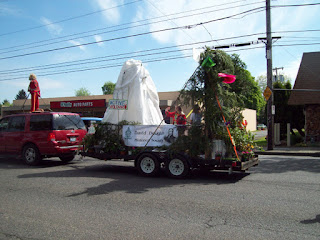 No trees were apparently injured in the construction of this, and the active volcano behaved. But it's lurking out there, beyond the easternmost part of Gresham, and would just like you to know that it's ready to get busy if it has to.

It doesn't want to go all Harry Truman on us. And we all know how that turned out.

Next, a float sponsored by George Morlan Plumbing, the Water Heater King. Because plumbing, crowned lions, and elephants.

I see no possible hidden meaning other than that. Nice work, tho. 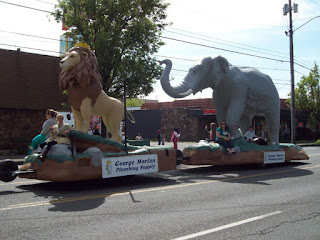 An interesting and vibrant east Asian culture is starting to spring up along 82nd in this area. Despite the demise of the pagoda'd Legin Restaurant (which was, at one time, called Lung Fung East), there are any number of Asian businesses, groceries, retail, and restaurants up and down 82nd from about Washington Street to Powell Blvd and beyond. The original Hung Far Low, once at the corner of NW 4th and Couch and whose sign still remains a Chinatown landmark, is now in the building on the NE corner of SE 82nd and Division. 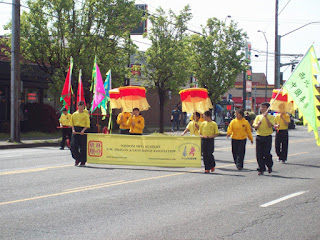 … and not long after, a dragon sauntered down the boulevard … 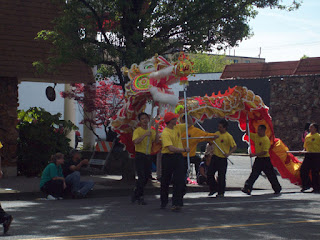 … chasing a flame, but never catching it … 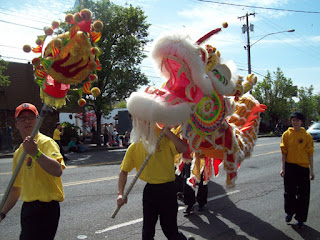 … and, just like that, was gone, still at that Sisyphean task. 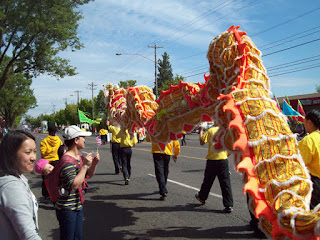 More in the "but, of course, this is Portland, after all" dept: The Last Regiment, a 'syncopated drum' marching corps: 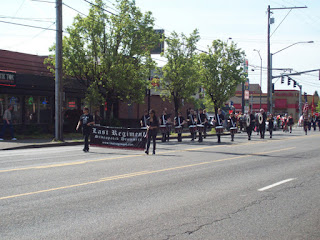 … and the flag girls, appropriately inked and attired in tank tops, short skirts, and net hose. Like I said, to steal Ian Karmel's Portland Mercury column title, this is as Portland as f#ck. 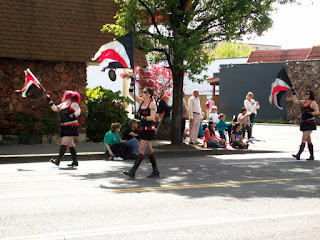 Okay, I don't have a tight snappy comment for this next one, so I'll leave it to you all: Jesus-preaching Christian church using a monkey to convince onlookers (who, I presume, haven't been to church) to trust Jesus. 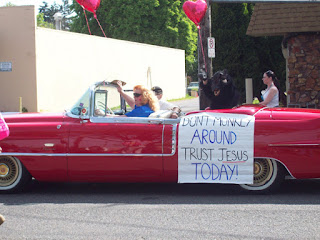 Colorful flags and Scottish pipers. A welcome and delightful fixture at any parade. Seriously. I love that stuff. 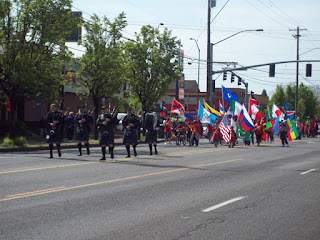 An unexpected blast from the past: Lonnie Burr, one of the first class of Mousketeers from the original Mickey Mouse Club. Vintage television royalty. 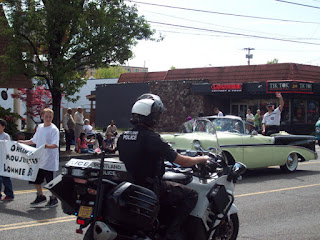 The Scooby Gang was apparently there, but, as luck would have it, I did not get to flirt with Velma. Still have three wishes to go. KITT rode honor guard, as you can see. 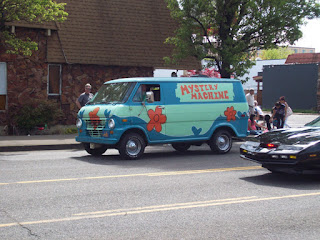 Short, shameful confession: I have no idea which tribe this wonderfully-costumed bunch belongs to. But aren't they a feast for the eyes? 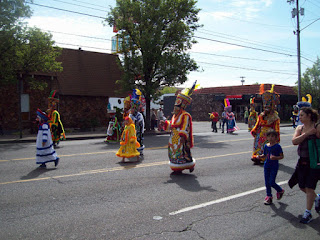 They are fearsome looking … but were quite friendly. 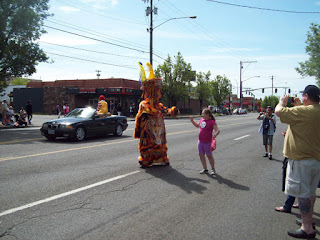 And, once again, because this is Portland … custom muscled-up … hearses. 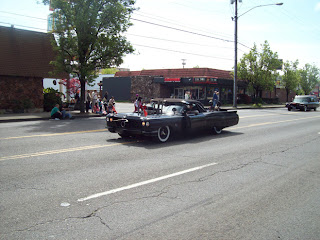 Also got a few minutes of video complete with Lion, Dragon, Charlie Hales, and Amanda Fritz. Also the most adorable little girl.