3243.
OryCon 37, the yearly must-do and the SF con I designed the program books for this year (which I'll talk about perforce) opened today and we went down to get the lay of the place, connect with much confriends, and get copies of my program book.

I was too busy to take photos inside, but let me tell you, the kids are alright, and the adults aren't doing too badly, not neither. The daytime parking … the nearby SmartPark garage offered $15 flat for four hours or more … that's another matter. Weekend parking is going to be a lot more kind, economically speaking.

The view from the 7th floor of the 2nd and Jefferson SmartPark was almost worth the price of parking there. Actually, priceless.

I give you two Portland icons. In the foreground, the Hawthorne Bridge. On the horizon, Mt. Hood, called by our Multnomahn predecessors Wy'east.  You won't be able to see this view forever though, in the next few years, a new and monolithic Multnomah County Courthouse is going up on that block between this POV and the bridge. How, I'm still not certain, but they're promising it's going to happen, much to the Veritable Quandary's dismay. 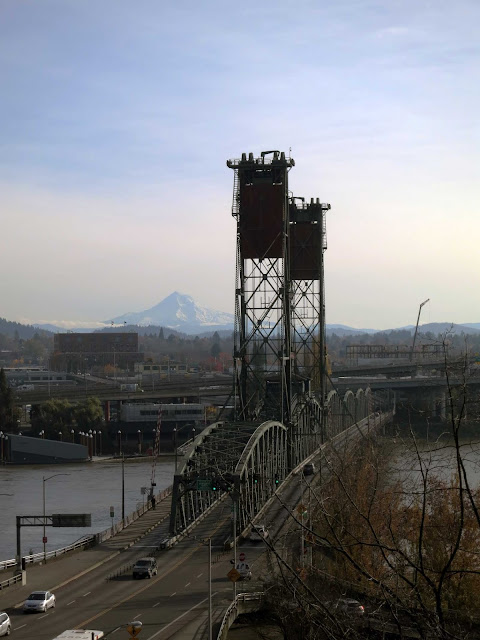 What is that white stuff on it, you may ask, fellow Oregonian?

Snow. It's snow. We haven't seen it out there in a while. And an ironic moment for me was realized when I remembered that that stop-sign in the middle, at the bottom, where the traffic from northbound Naito Parkway patiently waits for eastbound access to the bridge, is where Working Kirk Reeves did his best work.

Still miss that fellah. Haven't seen that vivacity around here in a long time.

Cropping the photo to more focus on the mountain gives a different feel. More drama. You lose the deck of the bridge but you gain the feeling of a whole other world. 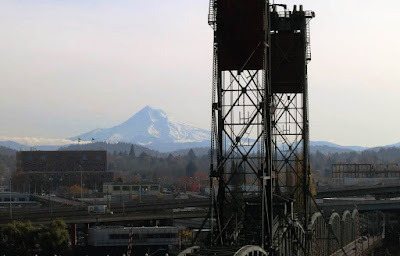 Of course, when it comes to volcanoes … 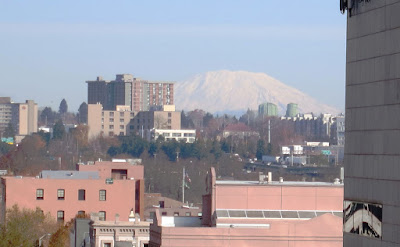 … we got 'em coming and going around here. But not quite erupting just now, a kindness that. Saint Helens reminds us we have to keep our eyes open.
They do make for an almost-indescribably-beautiful mountain, though.
Designed by: Samuel John Klein at 06:28 No comments:

3242.
Well, since the tables are covered with a sort of Kraft paper, and crayons are provided, you draw something.

And this is … well, certainly something. 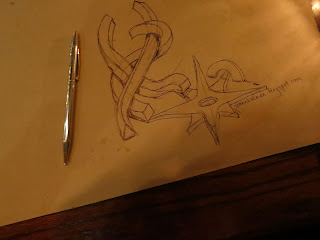 The crayons were kinda sad and unhelpful, so I used the trusty Cross Classic Century.

Another thing you do is order and share the Trinity fries, which are regular French fries, sweet-potato fries, and deep fried leek shreds. This is really tasty and relatively economical … you get a big bowl of fries for $8, and if you split that, that's $4 per. And $4 really isn't so much to spot when they taste that good. Also came with rosemary aioli. I'm not that big a fan of aioli.

And since it was sitting between us, we were suspiciously close to playing with (or in) our food. 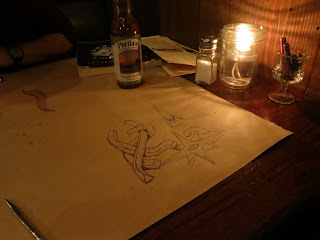 And, it was all fun and games … 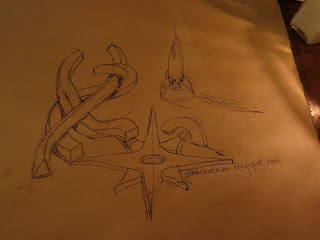 … until Rocketship X-1 showed up.

We didn't stay around to welcome the astronauts. We'd already had a full day.
Designed by: Samuel John Klein at 05:21 No comments: