3579
These are all times of extreme dexterity and chaos for many of us, and just because one has learnt to live with chaos doesn't mean that chaos is welcome.

And that's as may be. Comes the time, more than often, when what one sees bearing down on one becomes intimidating and the ability to stay on an even keel leaves of its own accord. You can't knowingly coax it back, but you can recreate it.

Recently I had trouble sleeping, freight train running in my head and all that, and The Wife™suggested I read some paper book. Not book on my cheapo yet faithful tablet, that involves that blue-biased backlight which doesn't really do your biological system any good, really kind of destabilizes it, and paper book reading is a very somatically satisfying thing to do, as one can find out for ones self by just doing it (hell, I just feel better holding a book in my had, but that's for another time). And my The Wife™, she know me well, and suggested. 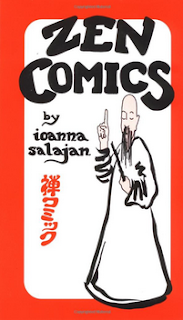 There is a pair of delightful little volumes called Zen Comics (not to be confused with the webcomic Zen Pencils). This modest collection of panels was drawn by a Buddhist named Ioanna Salajan, who was part of a Zen Buddhist community in Amsterdam back around the early 1970s, and they had a periodical called Cosmic Paper. She did these for that publication. What they are are little 4-panel (mostly; some of them break that to illustrate a joke or a theme) situations based on, as I understand it, Zen concepts or koans (and a koan, as I understand it, is a riddle or question that has no sensical answer, the point of which is to embrace the absurdity and acquire understanding from the point of view that provides).

There are around 100 of them in all split between two rather small volumes, titled Zen Comics and Zen Comics II. They are all charming little things that you glance over, then glance over again, and then move on and come back to. At first it's the comic style seeming to combine brushwork and fine line; the whole artistic style, seeming at once unashamedly primitive and childlike but somehow simultaneously sophisticated; and the feeling that it's all trying to communicate with you on a visible and and invisible level.

The comic has a handful of characters. The star, though I don't know if he'd say so, is The Old Monk, that chap on the cover graphic in the robe and that stylish beard with the head with the high dome. The co-star, who I've heard referred to as Number One Disciple, is his most frequent foil (and target of his switch) and serves as a relatable interlocutor. There's also Rinzo, a burr-headed chap who would be a Number One Disciple someday, if only he could figure some basics out. There are some other Zen practicioners, a few Western tourists, and one Samurai warrior who has an epiphany.

There's a whimsy that makes it all approachable even if the point is frequently ineffable (something I also understand a good koan's lesson should be). And I don't know if I'm getting the point of it all, but reading it (as I have many times, it never gets old) again and again always makes me feel a kind, gentle humor within.

It's been reprinted many times; my 2-volume set was printed by Charles H. Tuttle publishers back in the 80s. It's a pleasant reprieve for the weary mind. I recommend it to you.

The other book I've been absorbing is Ursula K. LeGuin's rendition (as she says herself, it's a rendition, not a translation) of the Tao Te Ching. It's a pleasant looking book, small, square, containing two CDs of her reading it as music plays in the background. I've not listened to the CDs yet. I read it, like Zen Comics, frankly, not quite comprehending what I'm reading but it's speaking to me on some level. I love it because UKL did it, of course, but there is a comfort to reading these poems not yet knowing what they are totally supposed to say but feeling their truths falling into place in some internal way.

Ursula K LeGuin's affection for the work makes it a soft, kind thing, and it too, helps me calm the anxiety.

And so it goes.
Designed by: Samuel John Klein at 11:39 No comments:

3578
The scene: the Winco 122nd And Halsey store. Me and The Wife™ leave the Mighty Multnomah County Library midland branch after enjoying a recharging day amongst the books complete with Dutch Bros Coffee because that's the way you Library Day, and we decide we want to get a few absolute necessities before Snowzilla comes to town.

The commute is pretty much normal for 1800 on a Friday night. I had heard, via staccato signals of constant information, that the stores in the Seattle area were getting astoundingly mobbed. Saw the pictures. Astounding. And, I figured the impending trip to the grocery was going to be a bit of an endurance trip but not ...

Well, I get ahead of myself. But I figured it would be a task needing fortitude but not like the penultimate scenes to When Worlds Collide or Deep Impact, or maybe half that bad. At most.

But how do you prepare yourself for something you've never seen and couldn't therefore envision? That you can't intellectually encompass because you have nothing to compare it to?

The store was thronged, to be sure, but it was channelled chaos; bumpy but negotiable. Wife finds us a handy parking spot; with her awareness of human nature, while every last parking spot in the lot in front of the store was taken, the spots on the side near the Shari's were NOT all full. People think of the area in front and everyone (including me) gets that tunnel-vision; they don't think about the small lot on the side.

Getting a cart was another challenge. There was not a free cart to be had. We had our library and Powell's City of Books bags and we went to work.

The first real clue that we were not operating under normal rules came in produce, when we found that there was not one bunch of bananas left in the place. At Whole Foods, they came for the kale, first. Here in more proletarian Outer East Portlandia, first they came for the 'nanas.

Walking off to bulk foods, we sang bars from "Yes, We Have No Bananas". because that's the way we roll.

The rest of the trip was uneventful if not for the immense crowd. The 122nd WinCo is laid out like most WinCos; the dairy is at the back.

As was the end of the line to the checkout. Down the dairy case on one side of that aisle; another proceeding the other way in front of the frozen foods case on the opposite side of that aisle. For a short time I worried it was all *one* line and I was going to be coming back that other way, but the WinCo logistics were immaculate; That line went to one end of the register line, our line to the other.

WinCo planning for this was straight-up rockstar, in other words.

Numerous incidences of simple human friendliness. This is when Oregon Nice comes out, in the transition between normal operations and crisis; oh, sure, if the apocalypse extends any more than a few days we'll be eating each other alive, but for the first few days, at least, we'll be cool with each other.

My wife comes back with a cart after I, having secured a place in the line with a few groceries already, had moved out of the dairy aisle alongside the bottled water area, which was by now as dry as the Atacama. The only cat litter available was in a 40-pound bucket, at which point an estimable gentleman donated his cart to her after concluding that he could carry what he had out to his car in his arms.

And I'll never have the opportunity to thank him, alas. Well, we paid that forward in our turn anyway. So that goes.

We waited in the line for check out, chatted philosophical (I can't speak for my spouse but I'm definitely in that phase of life) and exchanged conviviality with the others in the line ... and we checked out of Checkstand 1.

That's how you know this was a capital-E EVENT. Because, my friends, Checkstand 1 at your average WinCo is the one farthest away from the entrance. It's in the booneys, as the WinCo layout has it.

In that way, it's a shame that me and my spouse never had kids. We'd have grandkids who were infants by now, and in a few years, we'd be able to tell them the tale.

About how the weather was so bad, back in Feb of '19, that we checked out of WinCo at Checkstand 1.

And so it goes.
Designed by: Samuel John Klein at 10:56 No comments: