I adore 122nd. I don't know, nor do I really care, who thinks that a bustling 4-lane boulevard with a turn-lane, capped at one end by a care-worn Kmart and at the other end by a 7 Eleven and businesses who habla Español with a vengeance would be treasured by someone as some of the most beautiful city-scape in the world would be a crazy or stupid thing. Pfui on the rest of you, Portland, for pretending that everything east of I-205 is unworthy of that peculiar Portlandia-style cool. We rock out here, and this is my heart.

Here, on a bright, fresh, clear morning, at the end of February, in the year 2014, is a picture of Mount Hood, that most perfect of volcanic cones, from a 1972 VW Beetle parked just south of the corner of NE 122nd and Shaver and just north of the entry to Rossi Farms (a little green stamp that remains of what was once farms all the way from 82nd Avenue to Gresham):

Just wonderful and poetic. The ice-cold peak, new in an even thicker blanket of snow than last month (twice what it was last month, and just in time too … we're up to about 90% average snowpack in this basin, and it was starting to look more than a tecch dicey for the summer) wearing the clouds about it like a robe. The high clouds enhance the feeling of a distant chill; and the trees and buildings in the middleground, and the verdant spread of the Rossi property in front, juxtapose all that together and frame it thus-and-so, and you get the idea that the mountain fairly looms above you.

I don't know where I've found my compositional mojo latterly, but I've found it; the pictures I've been taking of Wy'east latterly have come closer to my subjective impression of size and space than anything ever.

And an improvement, by cropping out more of the crops and eliminating the competition from that tall tree:

Look, I don't get to participate in a lot of Portland. Despite my best efforts at schooling, all I can get anyone to give me is shift work that keeps me busy when things are happening and doesn't give me enough scratch to get too involved if I could show up. No matter. It wasn't the social whirl that attracted me to Portland anyway. It's the landscape, the precious background to whatever it is I'm doing. I can go out to Division Street, ride with my wife down to the Dutch Bros at SE 136th, and the working class neighborhoods are warm and humming, the strugglers are struggling, the stragglers are straggling, we out here aren't trying to be anything more than what we are or what we feel … and in the distance, this beautiful mountain peak, watching over all and saying "You're all OK. I can see that from here".

That said, if someone could see to it that I were a bit more well payed, I wouldn't fight it. Daddy does need a new pair of shoes betimes.
Designed by: Samuel John Klein at 11:39 No comments:

[photo] Adobe's DNG Converter … When Your Camera Raw is Too Uncooked

3027.
A few pictures in the last missive needed some additional, can you believe it, preprocessing before I could load them into Photoshop, something that took me by surprise.

It's the magic of competing formats. You have a lot of formats out there, not all are created equal, and everyone has their own way of doing things. The upside of this is that you have a lot of innovation. The downside is that your application might not be able to read the photo you took.

The Canon PowerShot 100S takes pictures almost too many ways to count. If you like setting your own options, the camera will, rather than .JPG, generate what's called a .CR2 file, which I take to be Canon's native Camera Raw format. I try to read this into Adobe Photoshop CS4 for my usual sizing before posting them to the blog … and though CS4 has recognized Camera Raw in the past, this one, it doesn't. I understand CS6 does, but that's not on the agenda yet and may not be, our shoestring being what it is, and I'm not in the class that can support the Creative Cloud (and I'm not that awestruck by the concept).

So, what to do? Seems a shame to waste those image files.

As it happens, there's an evolving universal standard, the .DNG file, or 'Digital Negative'. It's a standardization of Camera Raw, apparently, that CS4 can read.

And, thankfully, Adobe … the company that is good at standards, anyway, (thank you PDF) has a handy-dandy program that will convert your .CR2 files to .DNG, which Photoshop CS4 likes just fine.

To download the Mac version, good for Mac OS X 10.6-current (thankfully), go to this link:

It's about 145 MB and it's also free and works a treat on those files.

Yeah, it's just one more step. But, it works.
Designed by: Samuel John Klein at 08:03 No comments:

3026.
After the Icestorm'o'pocalyse of 2013-14, and a similar, but less intense rain and wind storm'o'podalypse thereafter, we return to something of a regular-life'o'pocalypse.

See? Pocalpyses all over!!! They say they had a bit of Ragnarock-n-roll over the weekend, but I noticed it not. Too jaded. Still cleaning up after the last three. Besides, our finance companies wouldn't stand for it. Show me the supernatural being that can take on a finance company, and that's where I'll find religion.

I don't usually digress at the beginning of a missive! SCORE!

But to the matter at hand. Saturday evening is likely to find us at the Burgerville at 122nd and Stark. And we linger to chat with Mitch, the night manager, who's a cool dude and a hoopy frood all around, and The Wife™looks out at the sunset and instructs me to look hither. 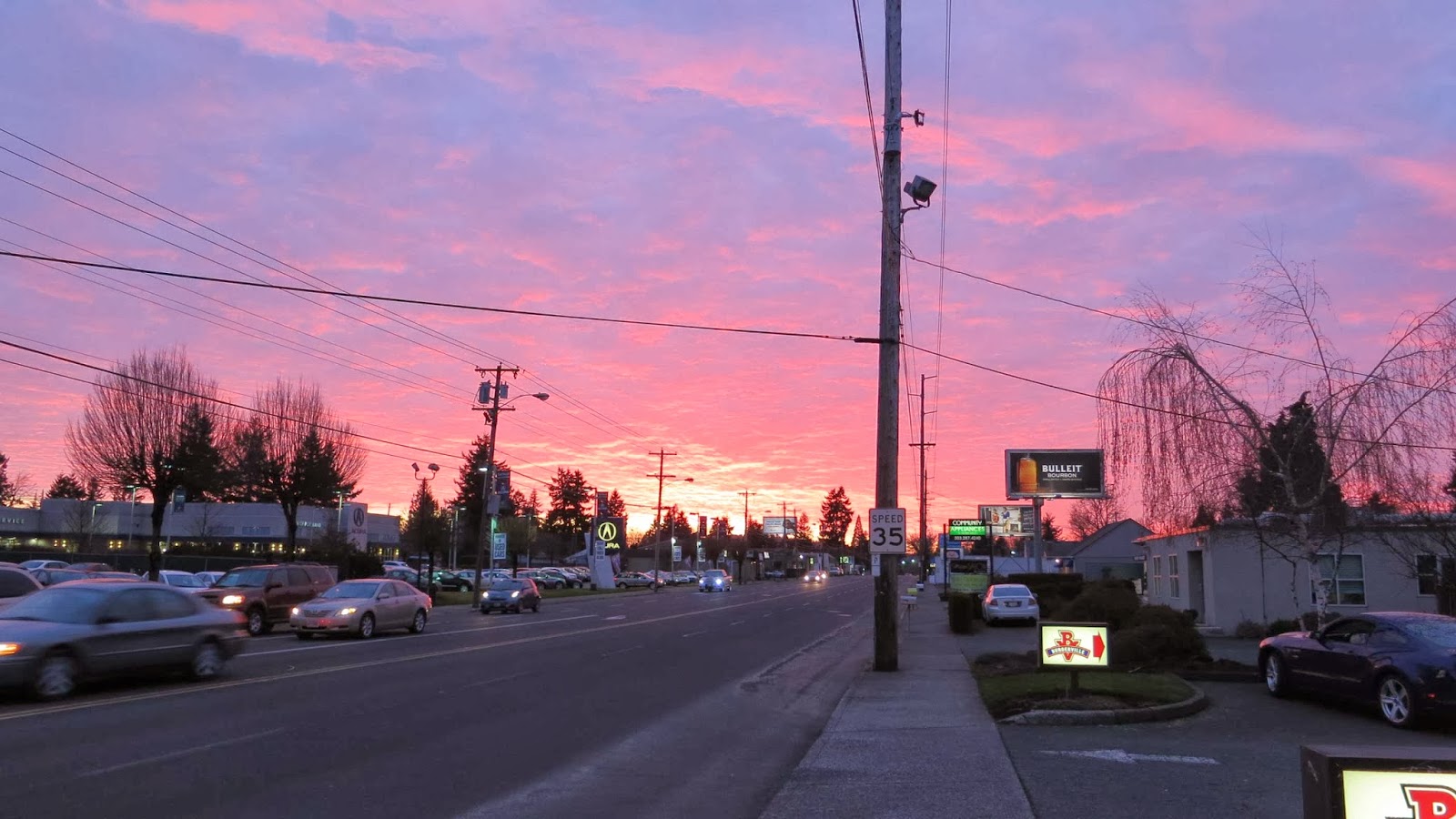 This, my friends, is why you have your camera with you at all times. Don't argue with me. Ours at current is a Canon PowerShot S100, which is an astoundingly powerful creative tool for the amateur photographer, such as myself (thank you, You Know Who You Are™ … I'll always be most grateful for this boon) 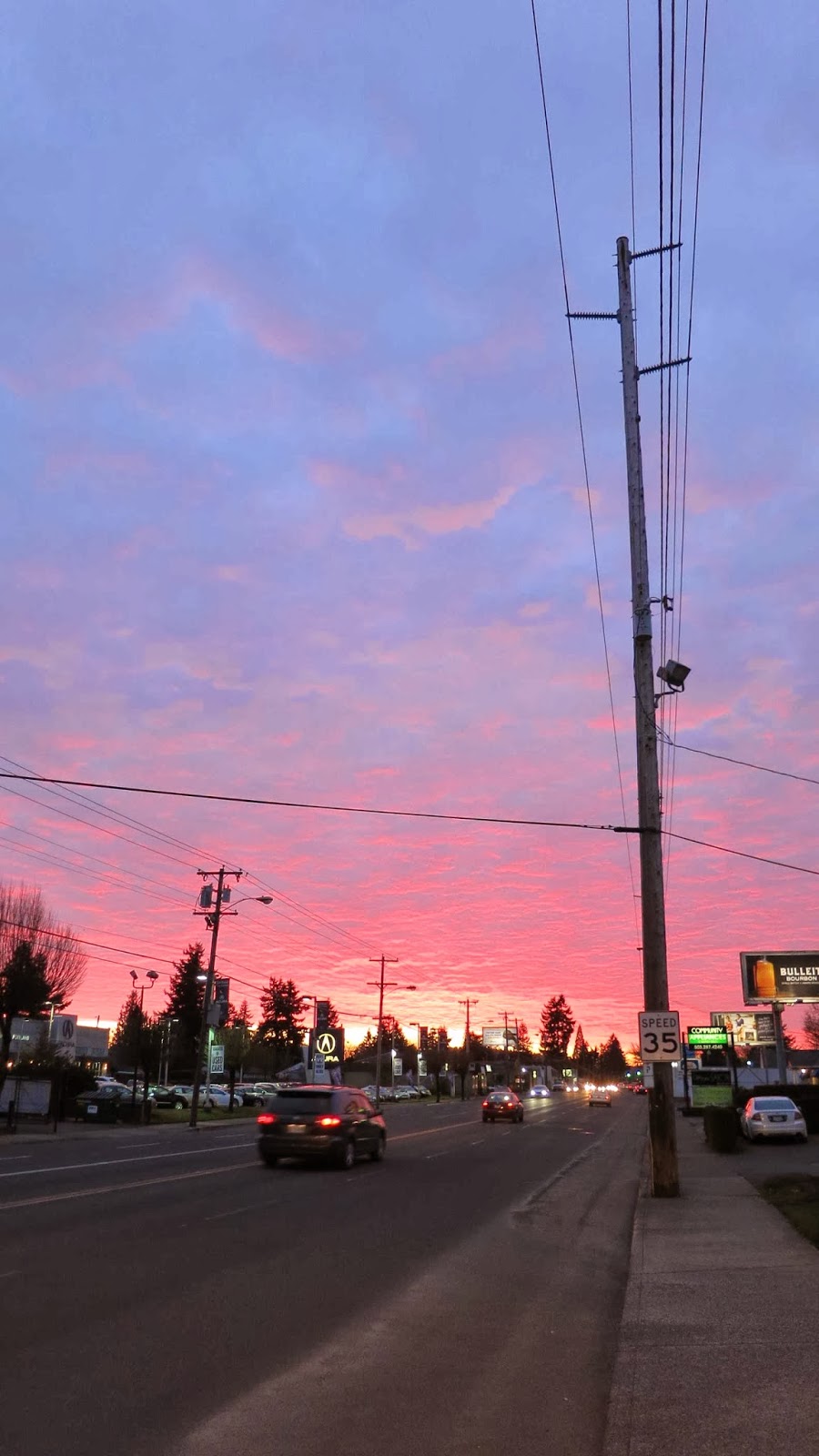 Since our margin of the continent is built on volcanoes' bones, it's altogether fitting that every now and again a sunset will come that looks like molten lava. Gradating into a twilight blue sky near the zenith was a pretty poetic thing. 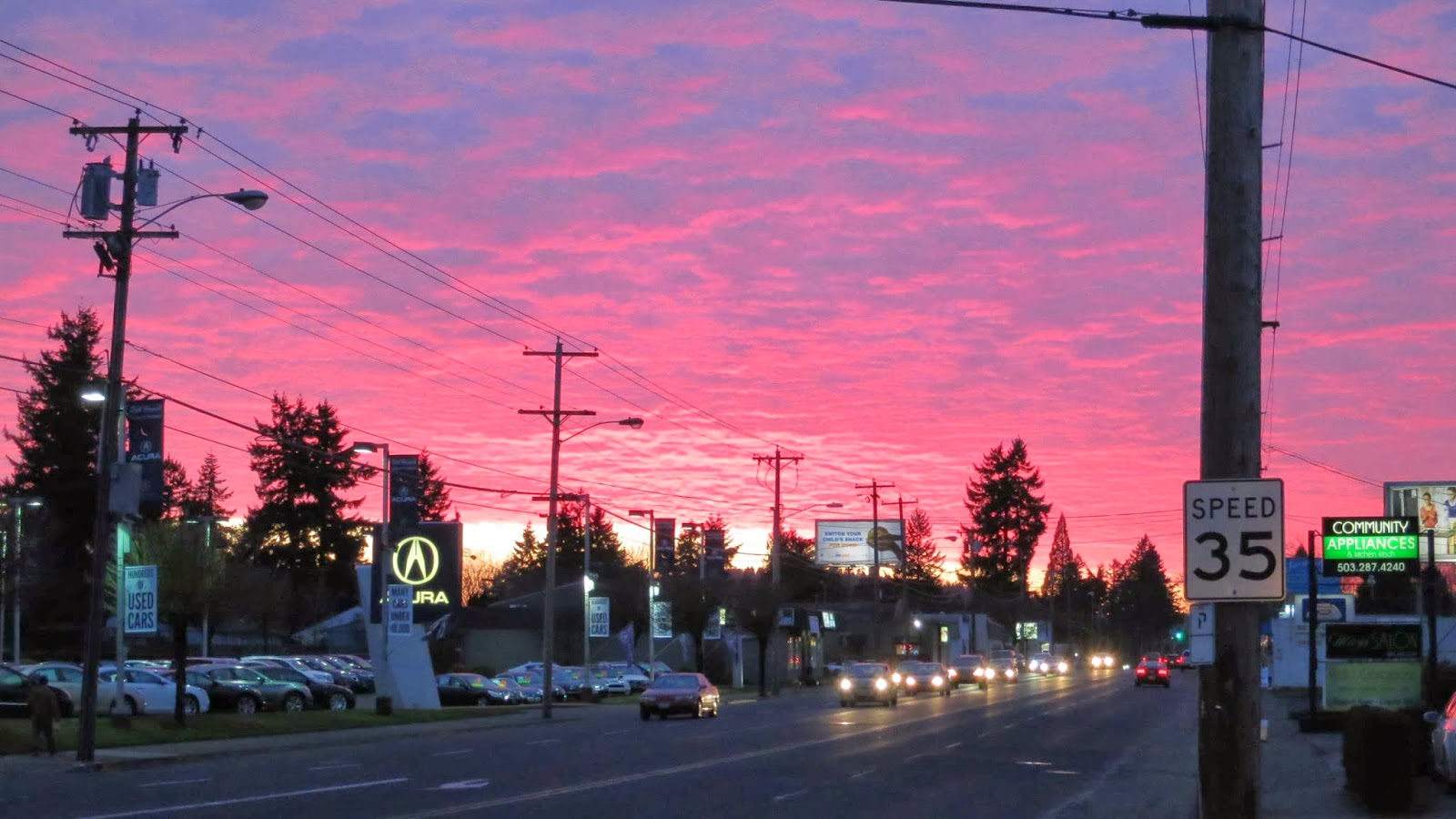 … and so we zoom in to frame a slightly different mood. Despite the weather, which was in the range of 45F, it's hard not to feel warm looking at this.

And so, we also play with the aperture a bit. 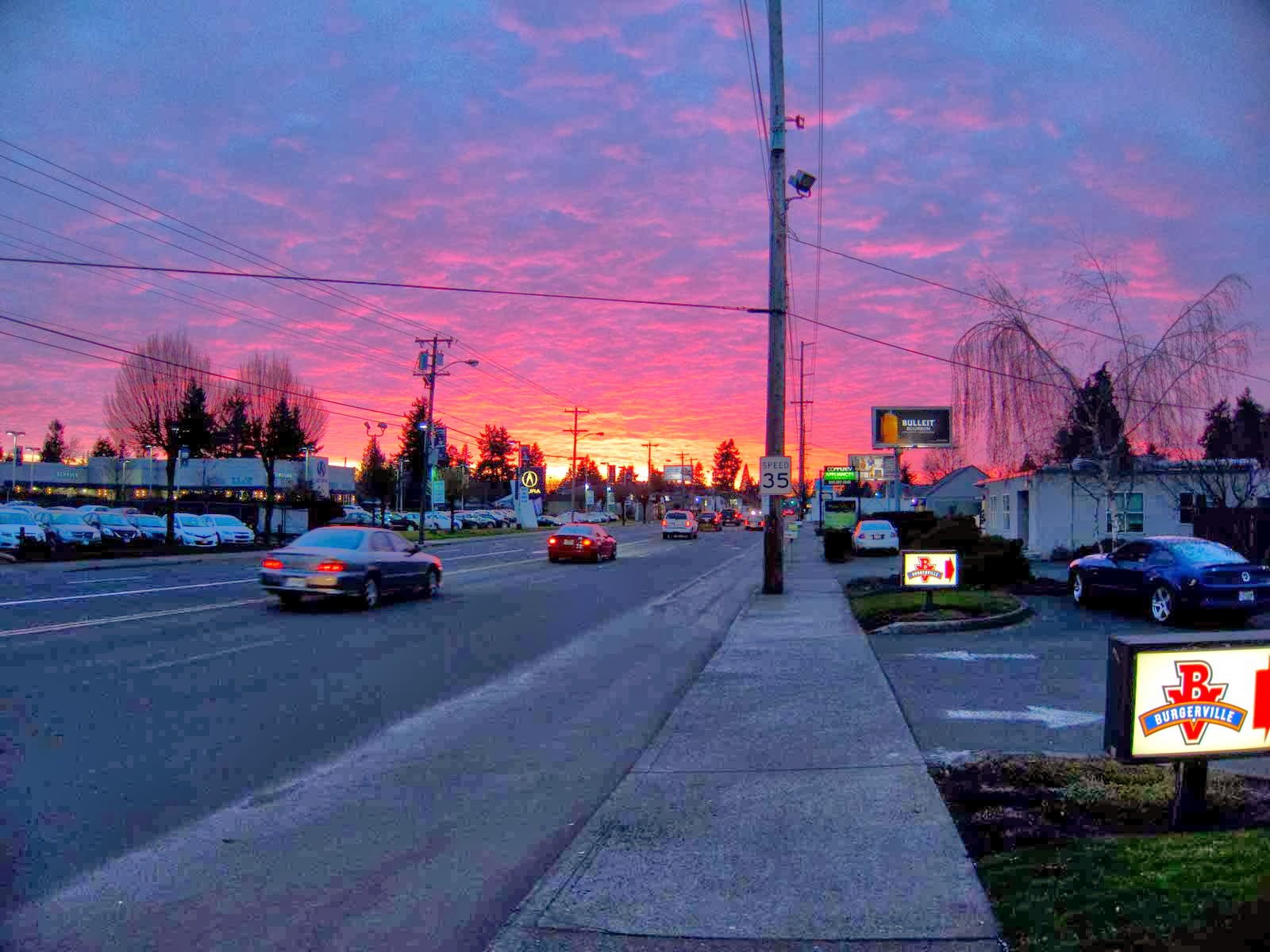 Restricting it, I found that I can up the warm, molten, electric color of the sunset rays. 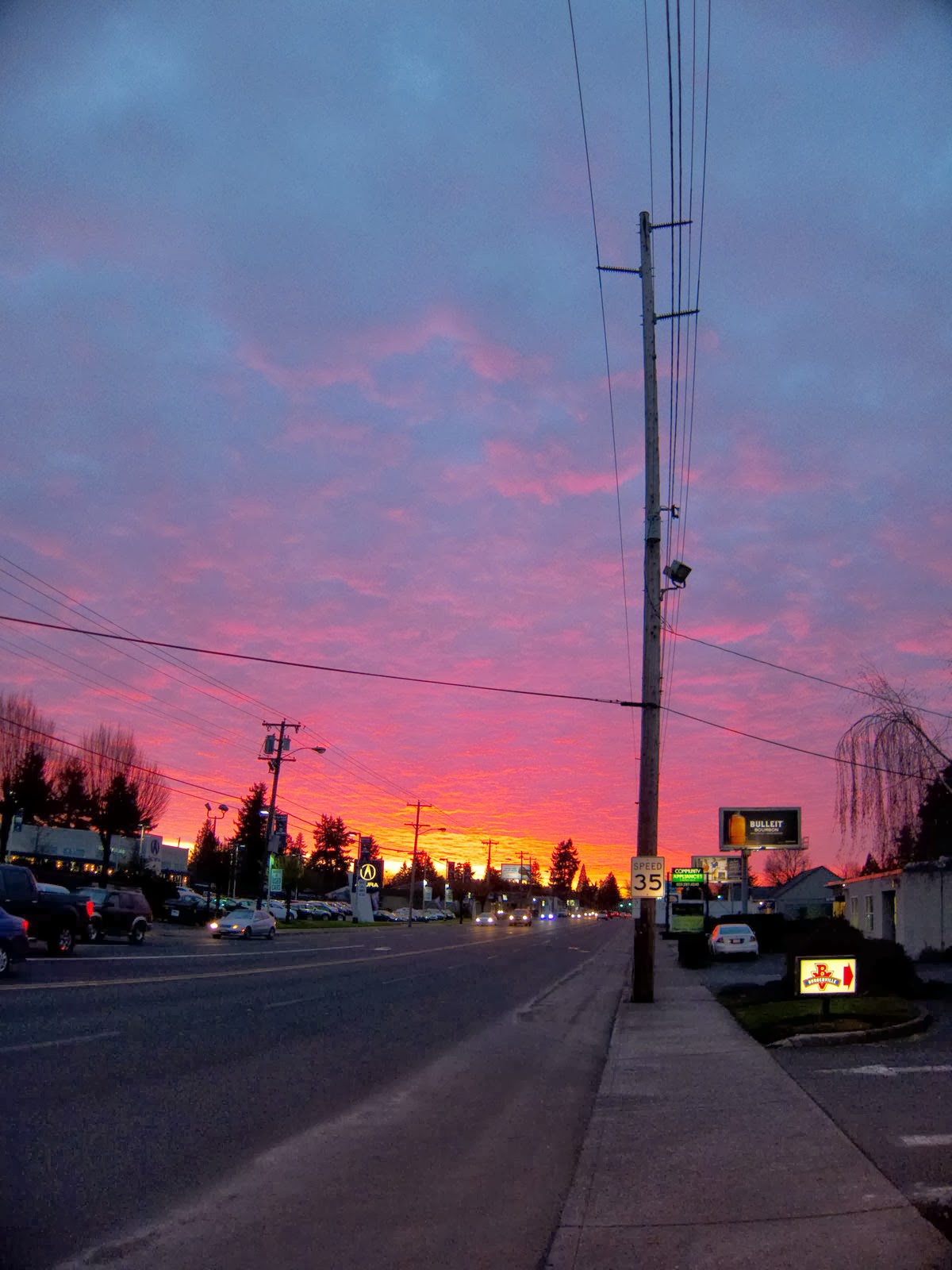 [pdx] The Ice Trees We Grow In Portlandia

3025.
The Mighty MultCoLib wasn't open over the weekend (smart move, but dang!) but we did go by the Mighty Midland to return some books

You don't see trees like this in Oregon very often: 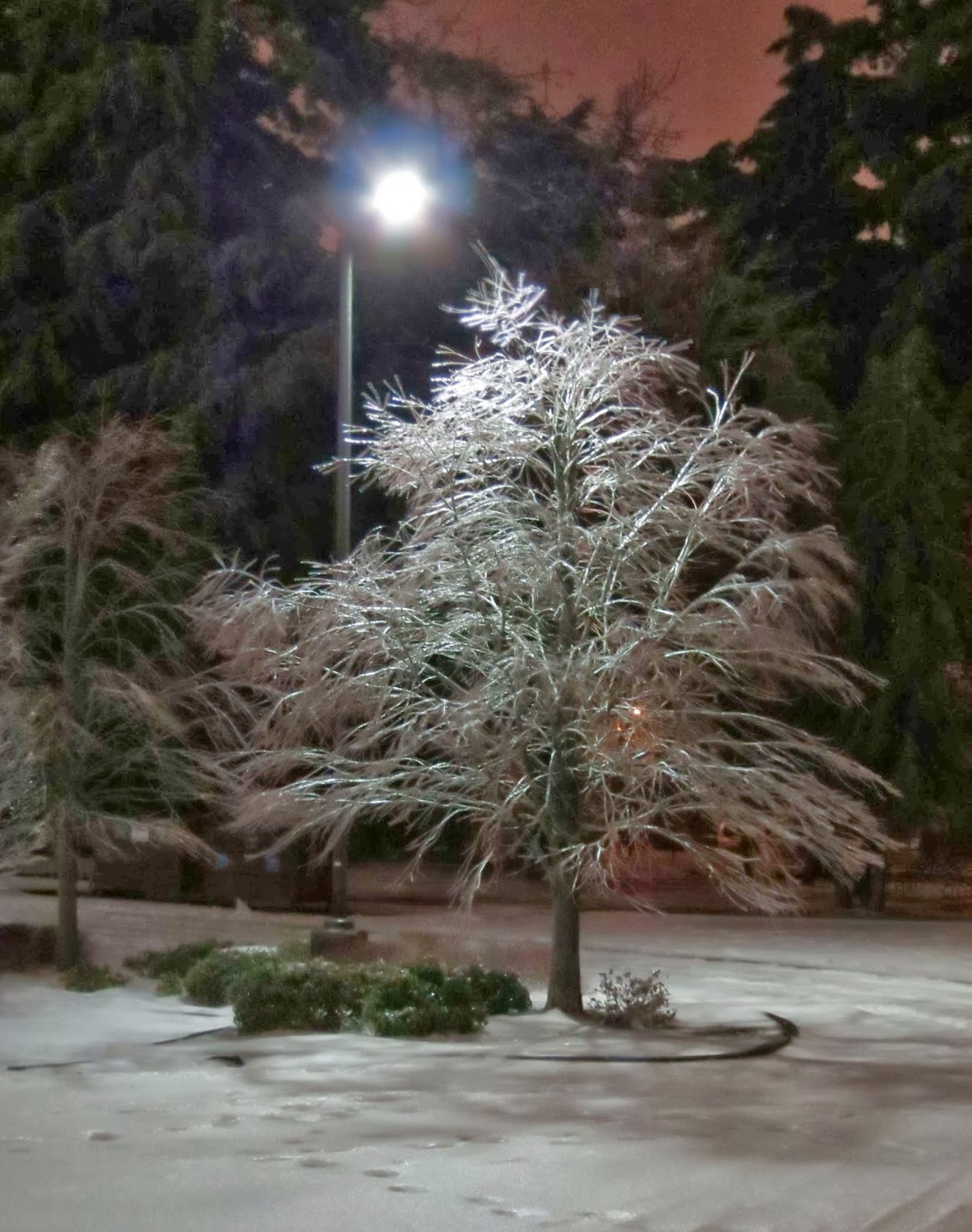 Ice: it's a bumper crop in Portland this season.
Designed by: Samuel John Klein at 20:11 3 comments:

Email ThisBlogThis!Share to TwitterShare to FacebookShare to Pinterest
Filed Under: liff in PDX, OregonSnowmageddon 2014, Out 122nd Way, Outer East Portlandia

3024.
Well, we out there in Greater Russellville are in for it; the freezing rain has come, and it has glazed the windows of Home Base. 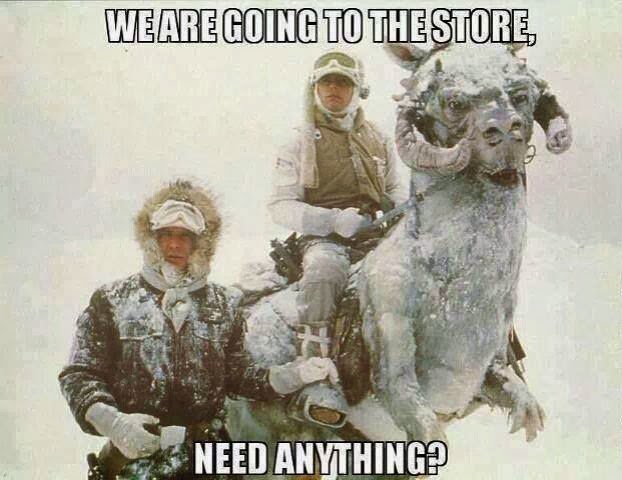 … the insides of a tauntaun are only about Luke-warm.
Designed by: Samuel John Klein at 18:29 No comments:

Email ThisBlogThis!Share to TwitterShare to FacebookShare to Pinterest
Filed Under: liff in Cascadia, Snowmageddonopocolypse 2012

[pdx] A Portland Panorama from the Pittock Mansion

3023.
A more panoramic view than the one in this post, but, judging by the way I've managed to obscure Big Pink, it was taken from a slightly (or maybe vastly) different POV on the Pittock Mansion lawn. Well, practice, practice …

Happy with the way this one turned out. Not 100% satisfied though. No matter, it's good. We'll certainly be back to the Pittock grounds for another try when the weather turns better, whenever that may be. 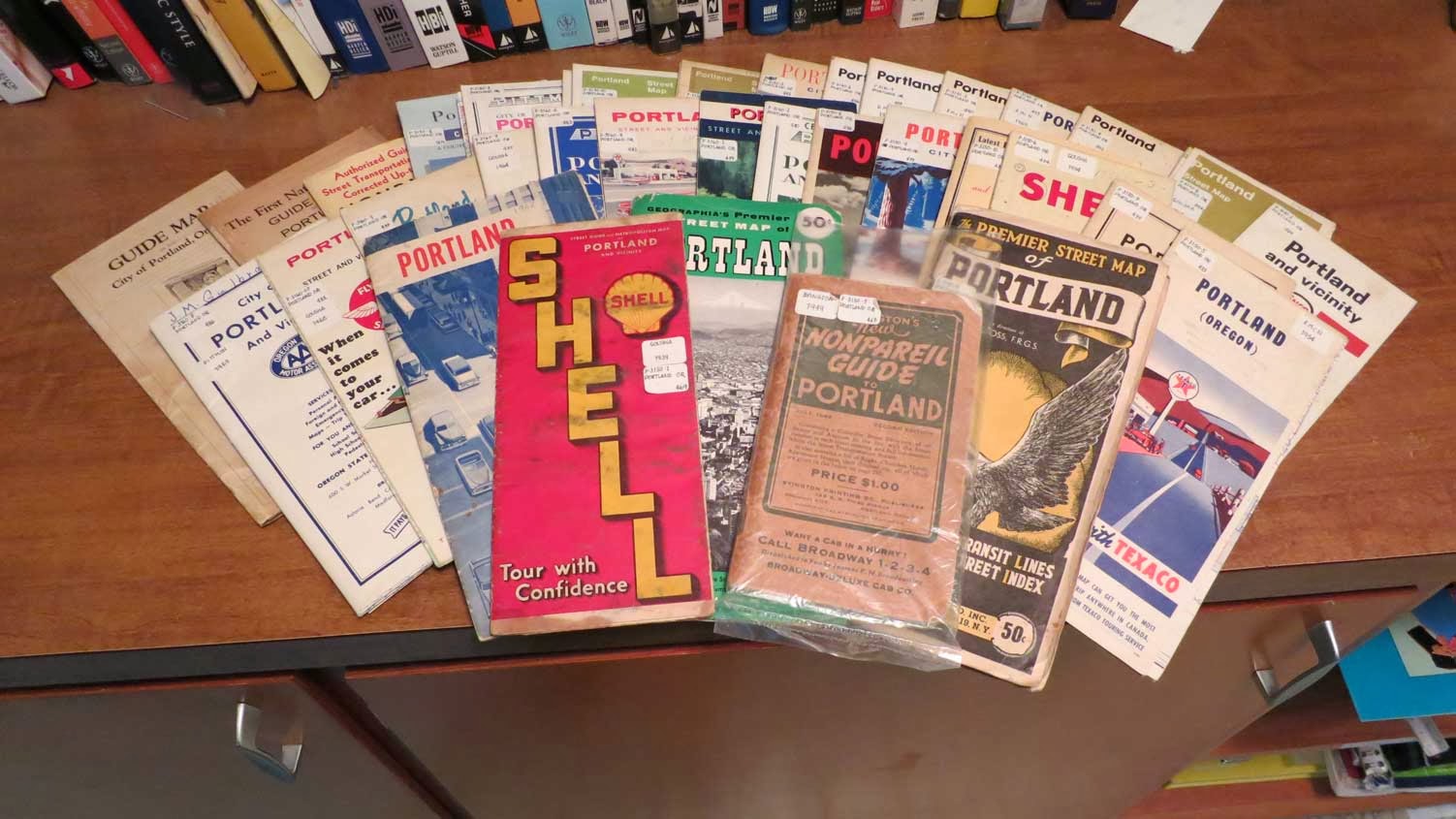 The oldest one, in the upper-left-hand corner, which has the words GUIDE MAP visible, is from 1928. The one in front, red with the word SHELL on it in stacked type, is from 1939. I've collected them over the years from a variety of sources.

I'm thinking of going through them, one-by-one, and commenting on the interesting bits of each one. I already have some commentary on the 1928 map (complete with pictures) which can be read and seen.

They are, of course, amongst my proudest and most dear possessions, this collection. They tell an interesting story of Portland's growth.
Designed by: Samuel John Klein at 00:41 No comments:

[pdx] Is It Snowing In Portland? 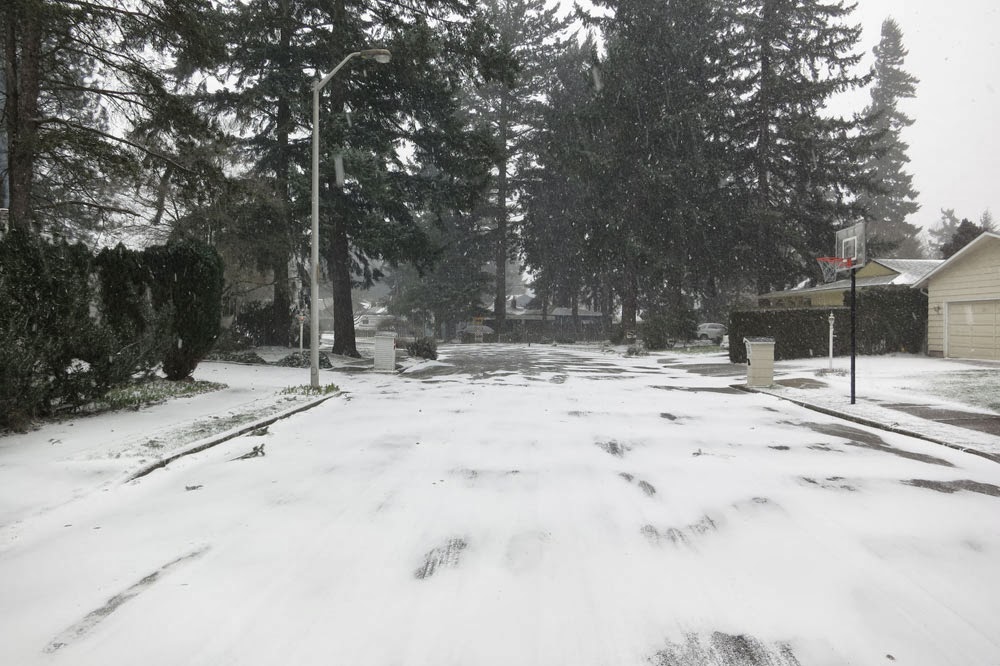 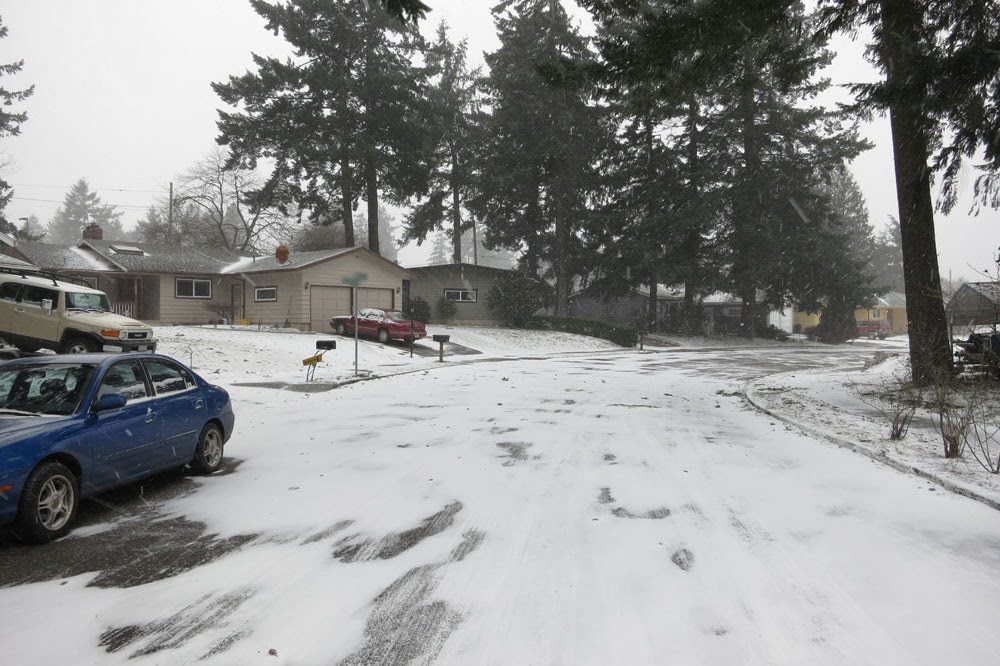 Yes, over there too.

We will rebuild, Portland!
Designed by: Samuel John Klein at 15:25 No comments:

Email ThisBlogThis!Share to TwitterShare to FacebookShare to Pinterest
Filed Under: liff in Outer East Portland, liff in PDX, OregonSnowmageddon 2014, Snowpocalyse

[pdx] On A Clear Day You Can See Mount Hood, or, Portland From the Pittock Mansion Before The Snow

3020.
Tomorrow at this time we expect to be engulfed by snow drifts measuring as much as three or four inches. Some say it's global warming, others say that it's the opening salvo softening us up for the kaiju invasion from the Fukushima event. Either way, this is what Portland looked like before the white hammer fell: 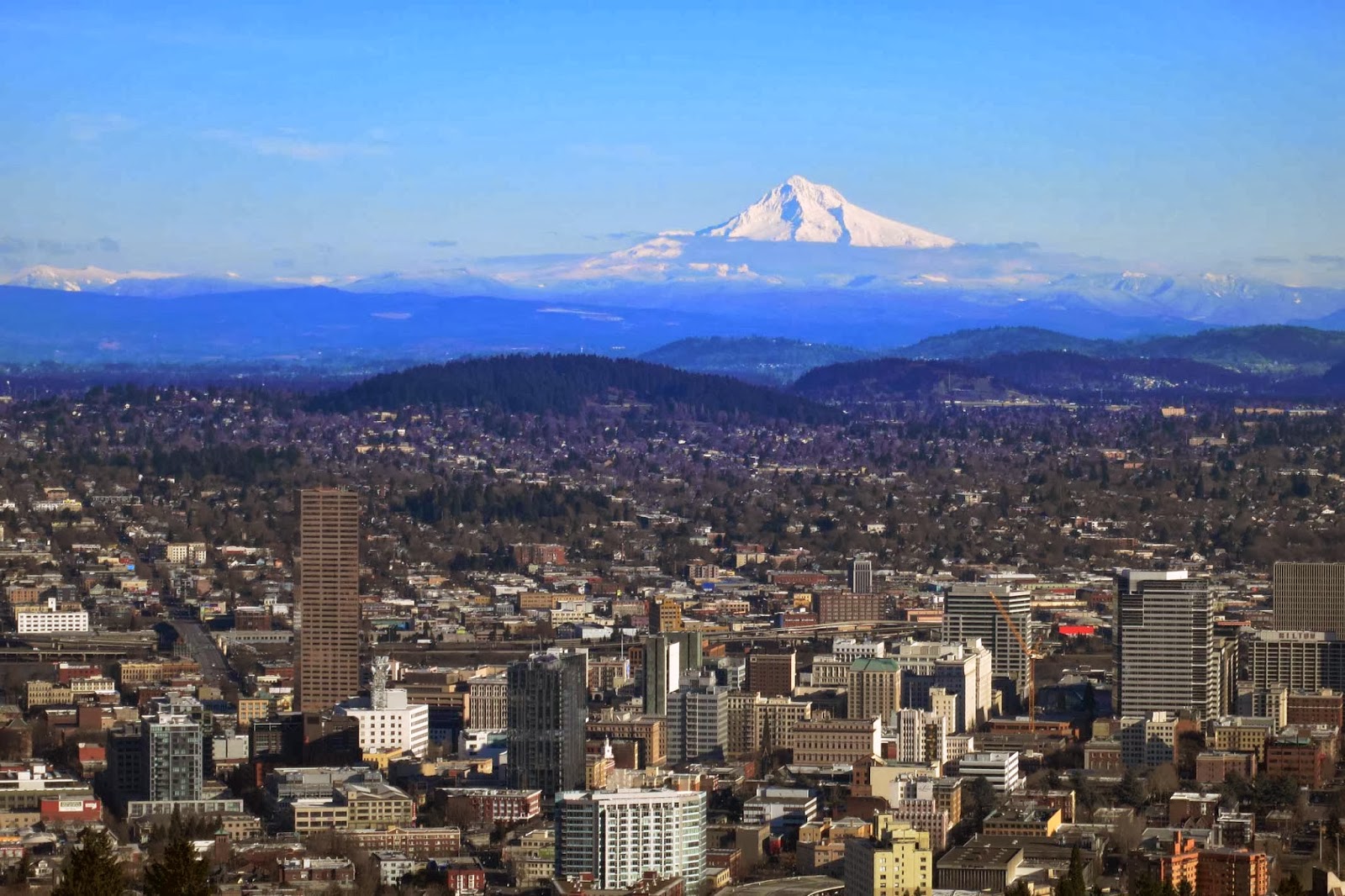 This is a wonderful angle and thanks to the free week at the Pittock Mansion, a photo I finally got round to taking.

Got more of this coming in entries to come; the Pittock is one place that has brought Portland history alive like no other for me. Learning something truly new is a good thing, and the wonderful Pittock makes it all vibrant and real.

See you all on the other side of the snowstorm.
Designed by: Samuel John Klein at 00:01 No comments: