[SF] The Sad Puppies May Have A Point

One of the most juvenile, at least to me, of the Sad Puppies' plaints about the trend of modern SF (you can fill in speculative fiction or science fiction, as is your wont) is elaborated by this point made by one of the leading opiners of the movement, Brad Torgerson:


That’s what’s happened to Science Fiction & Fantasy literature. A few decades ago, if you saw a lovely spaceship on a book cover, with a gorgeous planet in the background, you could be pretty sure you were going to get a rousing space adventure featuring starships and distant, amazing worlds. If you saw a barbarian swinging an axe? You were going to get a rousing fantasy epic with broad-chested heroes who slay monsters, and run off with beautiful women. Battle-armored interstellar jump troops shooting up alien invaders? Yup. A gritty military SF war story, where the humans defeat the odds and save the Earth. And so on, and so forth.
These days, you can’t be sure.
The book has a spaceship on the cover, but is it really going to be a story about space exploration and pioneering derring-do? Or is the story merely about racial prejudice and exploitation, with interplanetary or interstellar trappings?

And then it occurred to me that one of the cornerstones of this insurgency is apparently the right to judge a book by its cover. This is something that I was told never to do, that it was the sign of shallowness and unwarranted prejudice.

But then, I thought, what if there was a point to made here? Maybe I just work too hard at wanting an experience here. I mean, if I, as a consumer, should want to be guided with pretty shiny images, then who am I to complain? They do me a service, after all, in truth-in-labeling (as a liberal, I'm supposed to like that).

So, truth-in-labeling. Okay. We'll go with that. I hold in my hand a Berkeley 1981 re-release of one of my favorite novels, written by an acknowledged master of the form, one who went on to create iconic works of SF that inform the genre to this day. But, book-by-its-cover now … okay, I see an organically-formed, liquid, almost-melting edifice on a horizon under a hot yellow sky, and that edifice appears to be a building … after all, there's something that looks like a tiny figure standing in one of the openings (is it a window). On the whole, it looks like something Frank Gehry came up with in a fever dream.

In the sky, an eye orbits. Setting or rising, I can't tell, but there it is. to the right of the building, a small thing resembling a misconceived volcano seems to launching a weather balloon, or maybe Rover from The Prisoner. It's all on a purple plain resembling fused glass, with two rocks resembling rocketships in the foreground, and in the extreme foreground it appears that some poor soul has died, being embedded in the fused glass of the plain.

Needless to say, I expected a tripping-balls adventure about a science-fictional acid trip, but what did I actually get? Some lame story about an alternate past where the Japanese and Germans won WWII and divided up America between them. 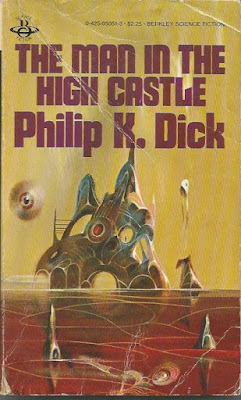 And, to fit the Sad Puppy profile of undeserving novels, it won the Hugo.

Clearly, this conspiracy has gone on way longer than any of us imaginers could have possibly imagined. Wake up, sheeple!