The tweet I sent out on a whim read thus: 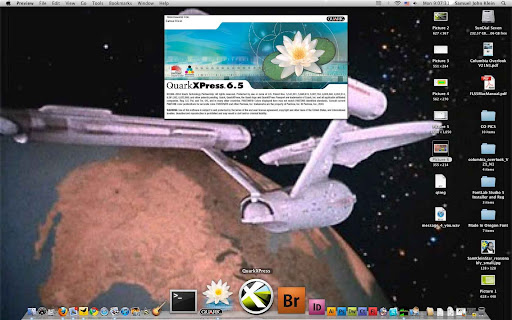 I have it downloaded now. I'm actually quite fond of QXP; they say you never forget your first, and I originally learned Quark on version 4.3 (remember, my electronic layout tribal brethren and sistern? Yes, good times, good times). I remember when QuarkXPress finally released Version 5 - because if they stood pat for much longer, Adobe would eat thier lunch and drink thier milkshake, because InDesign was that good … and getting better all the time.

Move up to the present, and I'm still an InDesigner; I couldn't imagine life without it. Quark, while apparently no longer being the category definer, has worked to keep up. The biggest problem they had - an inexcusable lag into native Mac OS X land - was finally cured in version 6. I own a copy of 6.5, and it's still a cracking good application, though by that time not the equal of InDesign.

Quark has not laid down and given up, becoming the latter-day Aldus Pagemaker, just yet. I have downloaded and have installed a test-drive copy of QuarkXPress 8.5, and will review it here presently.

My first impression is that it's brought up the attitude and the slickitude. QXP6.5, while updated and OS X-native, still felt unfinished. The addition of XTensions that read PSD files (PSDImport) and allowed image modification (Quark Vista) were needed and welcome - but felt a little tacked-on. Had they come too little, too late?

Well, it's 2011 and Quark, Inc still sells enough software to remain in business, so they must be doing something right. 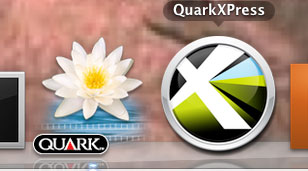 Email ThisBlogThis!Share to TwitterShare to FacebookShare to Pinterest
Filed Under: design, graphic design

I fairly certain they exist due to the same set of reasons that IE still exists... people don't know there are other choices or are too lazy or scared to explore other options.

You make a good point. Originally the resistance to InDesign came from what was already out there; there's a great amount of inertia, resisting change - as they say, one must never underestimate the power of an installed base, and there are still people out there who stick to Quark because it's always what they've done and it's not quite broken.

But based on what I've read, Quark has gone from the dominant electronic layout platform to a minority position, from 95 per cent of the market to about 30 percent of the market. They're down to basically People Who Like QuarkXPress™. And it has improved, with what I've seen of 8.5 so far. But the functionality of a Creative Suite? Not quite yet.

More as I get it.

Agreed, I just weened off Quark 8.1.6. One huge things its missing is the functionality of dragging items from Photoshop straight to the ID layout ... that is key.