2668.Back in February, JCPenney changed its logo but managed to maintain its identity.

Actually, before that, there's an interesting legend I once heard about JCPenney, and it has to do with its founder, James Cash Penney. It was told to me once that the immediate predecessor and progenitor to JCPenney, a small intermountain West chain called The Golden Rule stores, was so called because J.C. was a modest sort and thought it crass to name stores after himself, and wasn't named for him until after he left the scene.

I have since learned that the aphorism every legend has its foot in the truth doesn't necessarily apply here. Further reading shows that after J.C. bought his partners out and consolidated the growing chain under his leadership, in 1913, while he was still alive, he reformed the company under his own name. But it's an interesting legend that points out the power of a brand perception. After all, you expect a fair and square deal out of stores called The Golden Rule; and any mercantile operating under the name of its founder has got to have some fairly high standards or else that puts the good name of a man's family in bad repute.

Growing up in the last quarter of the 20th Century, I very dimly remember the Penney's logotype, over every door of every building, an interesting, designed thing. In 1971, however, the Penney's logo (now called JCPenney, no spaces), in the wake of the founder's death earlier in the year, became a Helvetica thing, usually knocked out of a square, thusly: 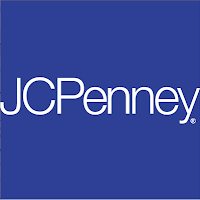 This is a logo with so little design, so little art to it, that it shouldn't work … but, oddly enough, it did. Sometimes, not much design is needed, or the realization of this is actually all the design that's called for. It fit in with the trend toward using Helvetica just about everywhere, which is a good or bad thing, depending on how one views it. After all, nobody really needed to know what JCPenney did or what it offered or the percieved values it espoused … value-priced but solid quality home stuff (clothes, tools, appliances, electronics (I once, when I was a but a kid, saved up to buy a stereo from Penney's) for the emerging urban and suburban home culture.

This logo, I felt, held up well, on the edge of being timeless. Being dated is in the eyes of the beholder (unless everyone seems to think so, at which point it becomes a verity) and to me, the simple and direct Helvetica and efficient kerning throughout stood the test of time.

The JCPenney company did, apparently not agree with this assessment, and commissioned a design competition some time back to come up with a new vision for this logo. And here's what they chose:

The design competition was won by Luke Langhus, a 3rd-year design student at University of Cincinnati, who achieved a bit of a stroke of brilliance in the design by shrinking the box to enclose the first three initials, giving the company the option of breaking the box out as an interestingly-rendered symbol of its own. The type remains Helvetica, a little bolder but not much, forming an obvious resonance with the old mark. It feels like something old yet new that respects something that was working quite well for them.

We do note in passing that this was the result of a design competition using students, and given our position on spec work are somewhat discomfited by that. However, the competition did produce a strong result and a good logo that respects design principles, unlike when The Gap tried it. There's a fine line, we suppose, between minimal design and design that resembles MSWord Word-Art, and Langhus's design, by cleverness, never came close to crossing it.
Designed by: Samuel John Klein at 08:21