[logo] Before and After: Banfield Pet Hospitals Logo Redesign

2784Banfield Pet Hospitals went from one modest office on NE 82nd and Broadway (that we once patronized, Back In The Day™) to a far flung pet clinic archipelago with literally hundreds of branches, some as far away as Great Britain. It's heart is still in Portland, as to say: the NE 82nd clinic is across the street from world headquarters, a nicely-done brick building with a public dog park in front.

When it originally expanded to PetSmart stores, it called itself VetSmart but eventually moved all those clinics to the Banfield brand. And when they did, it looked like this: 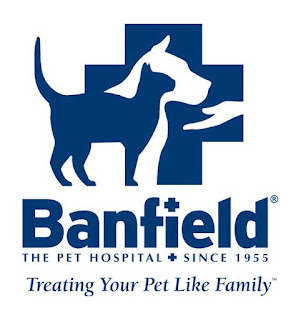 … and I enjoyed this. It was dead clever.

It's hard to really be distinctive when designing a logo for a vet. Judging by what I see, it's usually some combination of kitty and doggie, with a human hand sometimes offering encouragement, comfort, or maybe just a scritch on the head. And this does that.

But where it really excels is in the lower left, on the back side of the kitteh's leg and the underside of the belly. Notice that those lines are absolutely straight, where as the rest of the cat has natural contours? Now add those to the frame of the cross, which is thereby preserved, and you have a tiny little fillip that really kicks this one up to the next level.

That's the sort of little detail that makes an aspiring designer say wish I'd have thought of that one! and sets it apart, though in a very subtle way, from all the kitty/doggy combos out there. The rest of the display is kind of clever, though they couldh ave done without the cross as the tittle on the 'i'; it moves the crossbar on the f and the main part of the i down making the whole word look undone. However, I'd always read the bevelling on the l and the d as a nod to the freeway that gave the clinic its name; it makes the word Banfield resemble FHWA signage lettering.

Recently we've seen a new version of the logo emerge, and this is it:

Gone are the cat's body breaking the cross's frame, and the cross has a sunny aspect to it in the color. The human's hand is gone, leaving Fluffy and Fido looking into the distance for their pal; the type has been refined and polished.

But the polished type has lost the quirkiness of the original, and the cross, while more compact and easier to design to, has also lost its quirky attitude. It retains the interest of the old logo because of the similarity to it, but has dropped a great deal of its charm for something more buttoned-down, more slick.

That's not to say it doesn't have its own cleverness. The dog-cat profile that proceeds in from the lower-right is formed by one artfully-carved strip reversed out of the cross. And the sunny yellow color does feel cheerful.

But this is just mere cleverness, while the earlier version was cleverness which bespoke genius.

And the babies are probably missing their friend something fierce. Pets are like that.
Designed by: Samuel John Klein at 10:28

Email ThisBlogThis!Share to TwitterShare to FacebookShare to Pinterest
Filed Under: Before and After, liff in PDX, logo, logo design, logo redesign

I never could stand the two crosses above and below, that were never aligned (the small cross under the eye is always just to the right of the bigger cross dotting the I). I think it was tacky.

The cross as the tittle on the i was rather awkward, yes. It really didn't need to be. Minor flaw, AFAIC.