[art] What We Saw At The Linework NW, This Year

3176.
I must say, in the short time it's been extant, Linework NW has made strides in seven-league boots.

Last year was its first. Reviewing what I wrote then, It's plain we had fun. You certainly couldn't beat the price. And it was a charge being able to enter the Norse Hall, over by NE 11th and Couch.

Last year was such a success, they did it again. And they did it better. This rocket, my friends, is taking off. Whereas last year they made do with the big room downstairs and had the palmful of panels in the bar over a single day's proceedings, this year, it was two days worth of niftiness, more panels, and more space (the panels moved up to what was called the "Lodge Room"). And, instead of just one day, it was two.

About the only thing that suffers is the air circulation in that place. Not that it checked the velocity of the feeling in there one little tiny bit. At Linework NW, the air was also filled with this palpable electric charge … the community feeling, the creativity was almost so solid you could pluck it out of the air. And this was late on the second day.

We came in later on that second day. And it was so busy that I found myself regretting missing the first (if for no other reason than we missed one of the big-time guests … none other than Daniel Clowes (talk about punching above your weight. This is only the second iteration of Linework NW)). But the cosmos seems to be paying attention, and rewarded us handsomely for just showing up.

We sat in on one panel. Hazel Newlevant, Taneka Stotts, Tristan Tarwater, Lucy Bellwood and Kory Bing led a witty, knowledgeable talk about crowdfunding, touching on Kickstarter, Patreon, execution, what to expect, and how to expect the unexpected … no matter where I go personally with my art from here, I didn't necessarily see a crowdfunding step in the mix, but I have a good idea now why I might do it, and may at some point take it on.

A creator I muchly admire sat in on the talk; none other than Barry Deutsch, long time proprietor of Alas, A Blog, and creator of one of the winningest heroes I've ever run across, Mirka, whose adventures are chronicled in Hereville (of which I've exulted before), a brave graphic novel series about a brave young woman who takes on adversaries that none of us could frankly handle. I got to meet Barry, well, actually, my wife roped me in (gladly!) not knowing I'd heard of Alas, which was a moment of married-person comedy. Barry's a truly nice guy.

You don't get away from one of these without scoring something memorable, and since the event is still free, that's free as in Beer (top that, ComiCons) there's that much more money to spend for the tightly-budgeted on a goodie or an experience. For me, that came from the fertile mind of Lisa Congdon, who was a very nice person and sold me one of her books … one with danged useful info in it … Art, Inc … 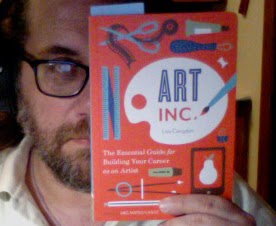 And then she did me an extra blessing, and signed it. 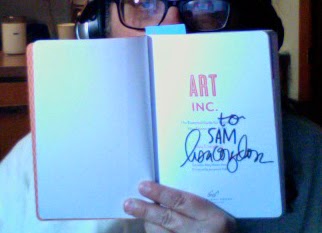 She chatted me up for a couple of moments. Not only did I listen to what she said, I listened to what I said back to her. I've always believed in paying attention to myself as well as others, because sometimes I find the most wonderful things. And this time, I found something. I need to unpack it, so I won't go on about it right here, at least not yet. I will. May be next week, may be next year. But I will expound. Eventually we all like sharing our epiphanies, and I'm no different from that.

The Wife™ had herself a sort-of-a-cosmic experience. She decided to plump for the delightful book D.I.Y. Magic, by Anthony Alvarado, who's also a thoroughly delightful person, as we found out because he, was, of course, there. There was a little bit of human humor over the fact that, at first, she didn't realize the guy behind the table was the author; she wondered aloud that it was possible for us to get the book signed and he acknowledged that it was; to the question in the air, I opined  that The answer is yes.

Well, as it happened, he'd made a habit that day of writing a bit of what he'd heard snatched from the air as appropriate … and there it was, inscribed just south of the title and just north of his byline, on the title page … THE ANSWER IS YES.

Which is appropriate, in an existential way. When it comes to Linework NW, for us, the answer will always be yes.
Designed by: Samuel John Klein at 10:17