A Shot In The Arm Of History

So, today, I got the 2nd shot of the Moderna Covid-19 vaccine. I work in an occupation where those who serve the needs of medically fragile people occasionally come in contact with me, and that's all the detail I'll render unto now. Suffice it to say that I sit at a bottleneck through which a chance encounter could be passed to someone who would pass it amongst many; and, conversely, those who pass amongst many may encounter me. And so, it was done.

The Covid-19 vaccination center for the greater Portland area was, as the news has well-documented by now, the Oregon Convention Center. Though I have lived in Portland a number of decades now, I have not yet been in the OCC, though I have admired its architecture. I was hoping to see the inside of it at sometime in my lifetime, but not like this ... no, never like this.
But who knew this was coming. Yeah, I know, everyone after a certain point, even those who refused to believe. Well, I didn't really think it would play out quite this way.
One month ago, when I got my first jab, there were a great many people in Army fatigues, and that was a little off-putting but, coming from me, that's an incredibly childish thing to say. Those were faithful Oregon Army National Guard soldiers, doing the dutiful thing that they signed up to do. They were neat, friendly, and very proper about it. And if I get a little anxious about it all, well, it's because that's what a lifetime reading apocalyptic speculative fiction will do for you. I'm quite glad that they were there.
The procedure was mundane, almost mechanical, which is a comfort. Means someone thought this out and had a plan in place, and that is a comfort. Entered at the south end of the main concourse, followed the line though various check-ins and filled in a form; sat at a table, was administered dose #1, waited in the observation area for 30 minutes to see that there were no ill effects, sent on my way.
Today I was there in the afternoon and it was really very much the same. I didn't have a paper or email confirming my appointment so I stepped to a lady standing at a table with a laptop who confirmed my name was on there and passed through; went up to the same room, talked to more or less the same people as last time, got the jab, sat in the observation area again, then left.
They asked that no photos be taken while in line though there was a 'selfie area' (how 21st Century is that, dear reader?) provided (I could see nobody celebrating with selfies though). So I have no pictures of the event. However, now mounted on a diary page for someone to find in my wake in whatever aftermath we have in front of is, is this: 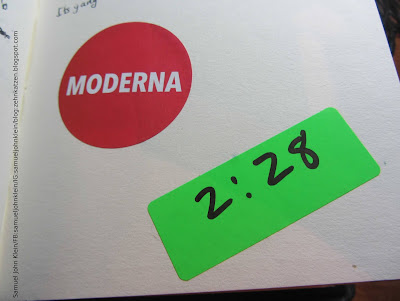 That circular red badge identified me as one of the Moderna group, for routing to the proper inoculators, and the green label was my reminder to stay in the observation area until 2:28 PM, Wednesday, the 24th of February, 2021.
There are questions and answers which are unique to every generation. My grand-cestors lived life though the depression, and when they saved and recycled and practices parsimonious habits, you knew without asking that they lived during the Great Depression. Similarly, we're going to have an entire generation of socially-distanced mask-wearers who compulsively wash their hands (the hand-washing's not that bad a thing, TBH) and will tell you their pandemic-inflected memories involving being vaccinated with a whole heapin' lot of other strangers, and you'll know they lived through Covid, no question about it.
And, so it goes.
Designed by: Samuel John Klein at 02:28