We care a great deal about coffee around SunDial Earth Station, so hearing so much promotion about decaffeinated coffee couldn't help but pique my interest. Not only that, man, I'm from Portland, where coffee culture was born, so I gots to represent, yes?

Decaffeinated coffee has always held a certain fascination for me for a handful of reasons. First, while I at current eschew decaf, I know a great deal of people who prefer it (for nutrition and health reasons). Also, I grew up in a world where Sanka was decaf. Moreover, it intrigued me that you could get coffee without an essential part of its very substance – I imagined it was a bit like getting deoxygenated water.

A final one might be that I, who have been drinking coffee longer than I care to remember, have never found a decaf that I've liked. I can't put my finger on exactly why, but when I drink a cup of decaf, there's a difference that escapes description.

So, I found out about what decaffeination means. Was really pretty surprised.

What decaffeination entails is essentially using a solvent to render the caffeine out of the green beans. In the most commonly-used process, known as the direct process, that chemical appears typically to be methylene chloride or ethyl acetate. The green beans are steamed, rinsed repeatedly with one or the other (they are an organic solvent, which is why they work to render out the caffeine) until more than 97% of the caffeine is gone, then steamed again to remove any traces of the solvent.

In contrast, the Swiss Water process (which is adequately documented for anyone to see at the Swiss Water Decaffeinated Coffee Co.'s website (it's angled at the retailer but I found it gently humorous with its retro-style and quite accessable)) uses only water. In this process, green beans are soaked in water to extract the caffeine and coffee solids, creating a green coffee extract. These beans are then discarded. A new batch of green coffee beans is then washed through this extract, which gradually displaces the caffeine, which is filtered out of the extract, which is then returned to wash over the green beans again, over and over, until the caffeine is gently removed to within accepted standards.

This process was originally pioneered in Switerland in the 1930s, which is where it gets its name. The company that does this bit of magic, however, is located in Vancouver, BC ... which is geographically appropriate to the great centers of coffee culture (the Cascadian coast). 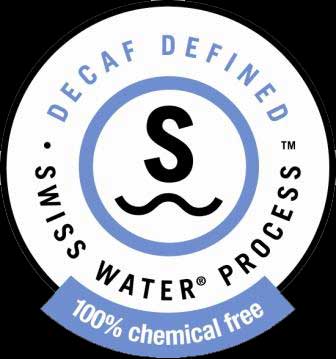 Now, for some logo talk.

Yesterday evening I was talking with some acquaintances and the conversation happened upon satisfying words. These are words that evoke such pleasant feelings, it's fun just to say them. I love the word roast, for instance, for all the tasty stuff that roasting produces – dry roast peanuts, beef and pork roast, pot roast (and I suppose it's no coincidence that these are all culinarily oriented).

For me, Swiss is such a word. Think "Swiss" cheese (Emmentaler, actually, yes); Swiss confectionery and pastry is world renowned. Many high-quality associations come with the idea of lifestyle when viewed through our perceptions of hardy, active, mountain-climbing, ski-crazy Swiss.

There is also a school of design thought known as the Swiss school, which gained prominence in the mid-20th Century, famous for clean, simple design that only includes what was absolutely necessary.

The idea of Swiss design is realized quite skillfully in the Swiss Water Process logo. The type is clean, spaced-out, and sans serif simplicity. Colors are chose which reflect purity, placidity (and here's a bit of our color reference knowledge – blue is seen typically as promoting calm and quietude, and the saturation is dialled back), with a severly limited palette that could also suggest the glacial colors of the mountains, referring to the purity and wholesomness of the ingredients. The design is just the right degree of bold, and the majuscule S and the wave not only say "Swiss Water" in a semiotic way but also seem to form the digraph SW.

The tagline "Decaf Defined" is clever phrasing that strives to claim the category in an essential way.

The Swiss Water Decaffeinated Coffee Company's whole approach accentuates overall a postive and wholesome message with honesty and access. That's a good thing, and I admire the way they've accomplished it.

I'm still not one for decaf, but if I was looking for it, I'd certainly give it a try.