2435.
One thing I learnt a long time ago are the first two rules of Timbers Army:

Successful or no, I do know that one of the things you face when updating/changing a logo or look to which many passionate fans have become attached is that not everyone is going to think it shiny. Some people will really hate you for this.

The attempt to rebrand Tropicana OJ stands as an excellent case study in this. Some time last year, Tropicana decided it was time to update the look, go beyond the iconic straw-in-the-orange. Funny thing was, though, nobody realized how iconic it was until they did away with it, or how many loyal customers invested good will and warm fuzzies in it until it was gone. Tropicana didn't change their look - they killed a trusted friend of their customers, who set up a storm of protest not seen since NBC tried to take Star Trek off the air back in 1967, which resulted in the return of the image to the packages. I drilled down a little more in-depth at http://zehnkatzen.blogspot.com/2009/03/tropicana-oj-redesign-fail-brand.html . 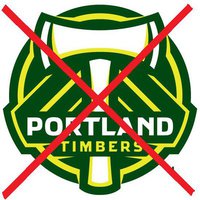 While it's too early to say how much impact what I've seen of the Timbers Army's aggregate opinion has on the visual and logo style going forward, the pointed opinions have been sharply pointed, indeed.

In a post on the rather soccer-oriented blog Pitch Invasion (URL-http://pitchinvasion.net/blog/2010/06/14/portland-timbers-new-logo-fail/) author Tom Dunsmore draws an opinionated take on the whole thing, declaring it a FAIL, and not mincing words (emphasis mine):

“You can’t fake this,” screams the Timbers’ MLS site, a not-so-subtle nod to the Timbers’ fans well-known antipathy to the Seattle Sounders marketing machine a little further north. Many supporters in the Timbers Army supporters’ group seem to view the new logo as a plastic imposition on Portland’s soccer tradition that the MLS team was supposed to be building on.

The 74 page thread that has grown in the couple of days since the announcement on the Timbers Army messageboard is full of vitriol about the logo’s cartoonish look and fighter plane styling. As is de rigueur these days, a Facebook group has been set-up to protest. The Timbers Army are not going to let this go easily.

The current logo has its roots in the crest of the first version of the Portland Timbers, the NASL side that existed from 1975 to 1982. The new one was developed by a marketing company called Rare Design, whose portfolio is remarkably extensive in its number of mediocre American sports team logo designs. Yes, the Timbers’ MLS logo incorporates a number of elements of the club’s traditional crest, but only in a manner that suggests mere lip service is being paid to that beloved identity.

Portland’s supporters, “organised” in the Timbers Army with the simple credo that you are Timbers Army if you want to be Timbers Army, have built their remarkable culture around that identity and the history of the club in Portland. It’s been a messy history, but it’s one that has been tied to that logo off and on since the 1970s, an age in American soccer.

There exist in that article two photos that are remarkable in their accidental emotional content. One, here (http://hphotos-snc3.fbcdn.net/hs301.snc3/28637_1461876837813_1560230850_1139959_1982065_n.jpg) features a great deal of "digital" (as in with a finger) editorializing by a group of Timbers addicts in the foreground. While not overwhelmingly rude, one should only view it out of the range of children who are prone to ask what that finger is supposed to mean.

The other one ought to go down in some sort of history, because it really does illustrate the awkwardness that has obtained when big money starts to build on the foundation that passionate fans construct. This picture from Photobucket user "yabollox" suggests that some of the more opinionated fans took thier concerns right to team owner after the ceremony:

Linked to from Yallbollox on photobucket. Copyright remains with author.
Now, this is just a moment in time. One supposes anything could be happening here within reason; one thing that probably wasn't happening is an "I love you, man" moment and that Precious Moments figurines were given out after. The presence of the guy in the red-white-n-blue and the red cap says that this was the same group who where giving the new logo the bird squadron in that other photo.

For many people, sports loyalties are pretty much a religion. If you want everyone on board, you definitely want the hardcore fans. And if you haven't won the Timbers hardcore battle, one wonders if, regardless of the spiffiness and slickness of the new look and how much one says it pays sincere homage to the past, you've won the war.

The new-logo-hating facebook group, if you're wondering, is right here: