A Glance At "Pencilgraphing", a Vintage How-To-Draw Book From the Thirties

3567
It's evolved that one of the things I'm coming to greatly enjoy as age presents itself to me is the idea of antique and vintage art instuctionals. There have been people who want to make a living teaching the average you'n'me how to make drawing a hobby for at leastas long as there's was a Bill Alexander and even longer.

The art publication in the last missive was printed, as near as I can determine, in the mid 1960s. If that seems and antique, how about one from the Great Depression?

Pencilgraphing is the title of this slim, black hardback book I found at Powell's for a song on Saturday. It was published in 1936, by Pencilgraphing, Inc. of none other than little ol' Wenatchee, Washington, and the tagline is Makes sketching as easy as writing.

The title shows three pencils askew of each other and a chisel-shaped eraser similar to a Pink Pearl. 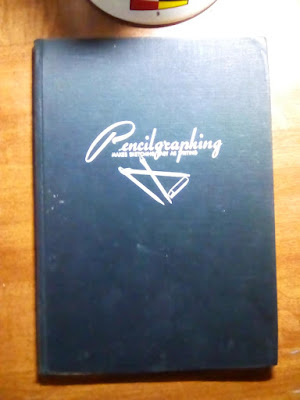 The title pages is handsomely laid out on the verso with an asymmetrical illustration from the author's own hand, presumably the calibre of the work one might eventually produce with diligent practice of the technique. 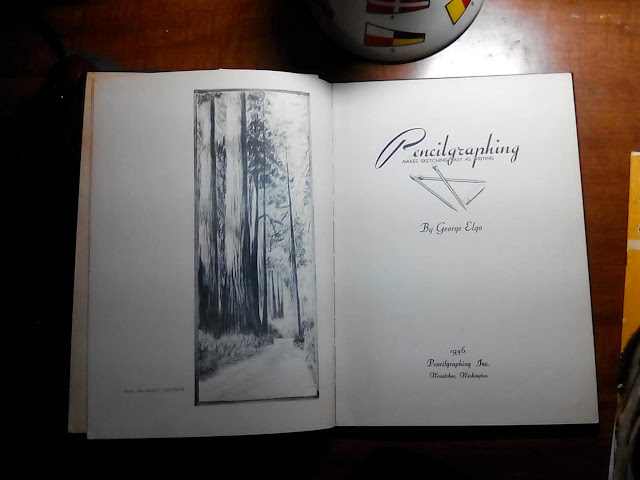 Like many artistic techniques, George Elgo's teaches you to reduce things you want to draw into the simple forms. In his specialized lingo, the basic shapes are measuring units. Every method maker wants thier own rubrics, and Elgo was apparently no exception. 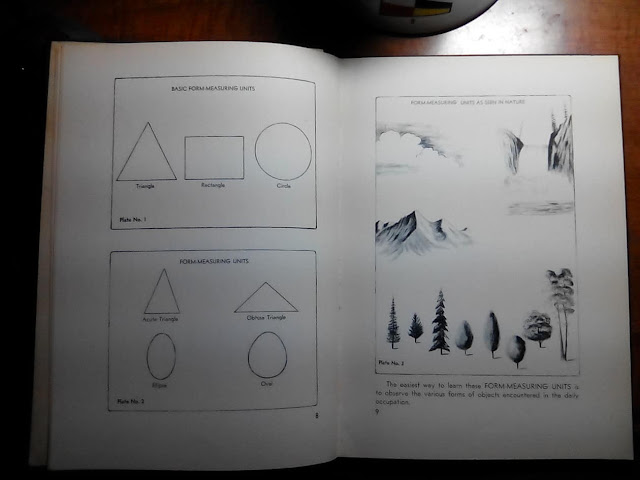 The tools are simply enumerated: four erasers, three pencils, and a sheet of 00 sandpaper. The pencils are B, 3B, and 6B. Three of the four erasers are those wedge-shaped cap erasers that we all put on the ends of our pencils in grade school when we wore the standard erasers down, and the fourth is the larger, Pink Pearl-style erasers, which are important for their chisel-shaped ends. The drawing ground was simply specified as typing paper. So, the tools are at least accessible.

After a dead-serious couple of lessons introducing the aspiring Pencilgrapher to the basic thin strokes and how to make shading and modeling (massy) strokes, the catalyst is introduced in the use of the erasers.


The erasers are mostly used in this method as a stump or tortillion is used in graphite and pencil art - for blending graphite and modelling shade. Think of the way Bob Ross uses his palette knife to lay in the shading on the side of mountains and you'll have the basics of the idea. In the case of the large chisel eraser, this is used to 'cut' lines, produce highlights, and for blending out or removing large areas of shade as needed.


The sandpaper comes in when you want to do 'modeling': the 6B is scratched against it to leave graphite which can be picked up from it with the wedge-shaped eraser, which is then used to stroke graphite on the paper in the manner of a paint brush. The sandpaper also cleans off the eraser's surface and keeps the edges of the erasers keen as well as shaping the pencil point.

The combination of specialized, simplified strokes with the intentional use of the eraser as a drawing tool and the consolidation of all activity on the pencil brings everything into one functional concentrated place where you're using the pencil like a combination of pencil and blending tool and this is where the author evidently felt that sketching would be as simple as handwriting.

It has some merit. I can see some aspects of it that can be used in any drawing practice, and the dependence on the eraser as an all-purpose blending tool isn't wholly innovative but was a fresh approach to the aspiring artist coming from a layman's perspective.
Designed by: Samuel John Klein at 13:24

Email ThisBlogThis!Share to TwitterShare to FacebookShare to Pinterest
Filed Under: art how-to, graphite drawing, How To Draw, pencils