3564.
So, I glide-pathed gracefully into the end of Royal & Langnickel's PAL28-3T: 50's Diner. Of the various projects I've done since PBN has re-introduced itself to me, and me, it, this has been by far the most fun and satisfying.

Whoever designed the kit knew just what to leave out and put it. The rendering of the illustration onto PBN abstract was immaculate, as far as I'm concerned. 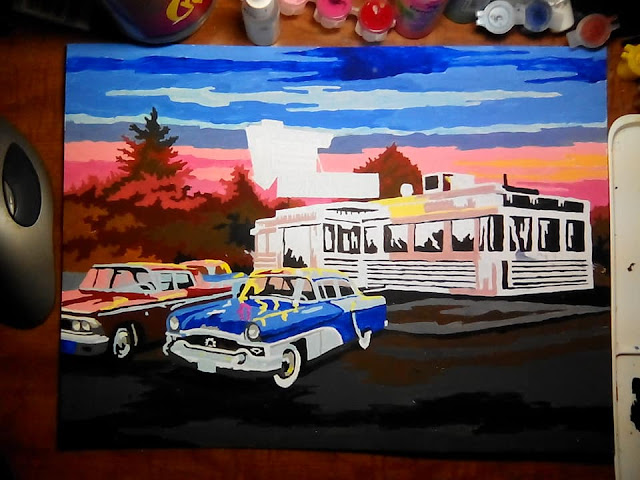 As I've mentioned under other aegis, the plan was to work from the outside in. That meant sky, ground, foliage, cars, building, sign. It worked out very well in this one. The above picture was the first fillins to the building, which was, by then, the only part of the picture remaining un-painted. The long lines and straight spaces contrasted interestingly with he ripply reflections in the windows. 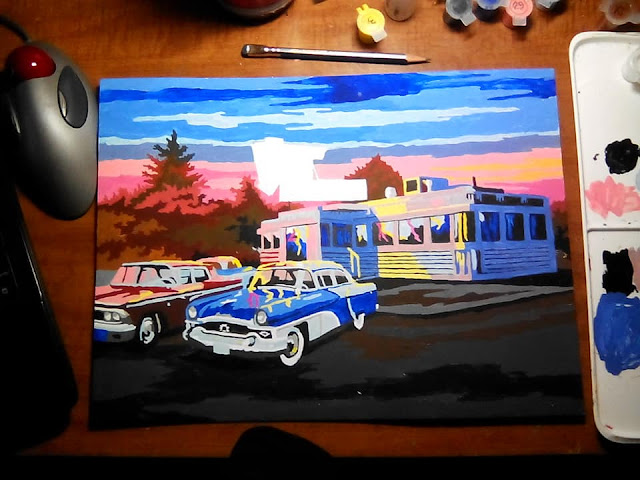 Filling in the rest o the windows and getting the dark areas in the building gave it solidity and dimension and really started to make the painting pop. 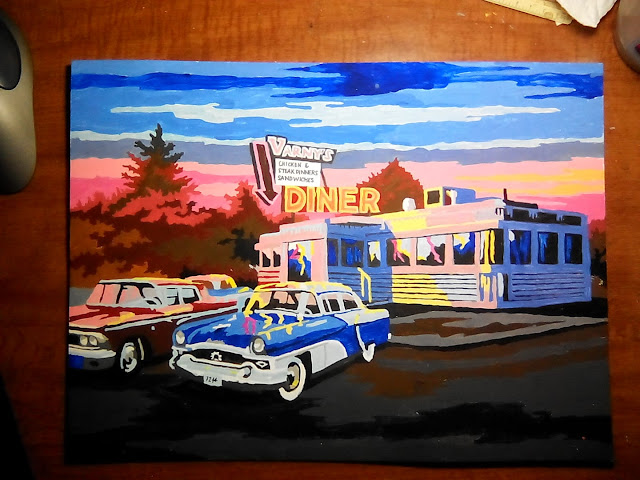 The completion of the sign atop the diner was the final pin that the logic of the lighting pivoted on. The bright yellow of the neon in the word DINER gave the yellow areas of reflected light on the cars and the building's side its internal sense. It was also terribly much fun to do.

There area  couple of small things that actually makes this, by definition, multi media. The black print on the sign and the numbers on the license plate have issues; the plate gets covered up by the light blue and the part of the sign with the writing on it is unpainted (that's the panel showing through) and the writing is in the same screened-back blue that the rest of the painting's marks are. Fine line Sharpie to the rescue! So, I can truthfully say that this is a work in acrylic paint and marker. Multi-media artist, me, now!

And we'll put this one on the wall near the others. It should be a centerpiece, really.

Next up, we have an uncommon thing for this blog ... an unboxing! And it all has to do with the next project.
Designed by: Samuel John Klein at 09:29

Email ThisBlogThis!Share to TwitterShare to FacebookShare to Pinterest
Filed Under: acrylic painting, paint by number, The Daily Paint By Number