Just on the north side of that small place called Depoe Bay is a notch in the shoreline called Boiler Bay.

There is a State Parks wayside there and we took the opportunity to pull off, go down, and listen to the surf.

Boiler Bay is not named as such because of the turbulent surf. 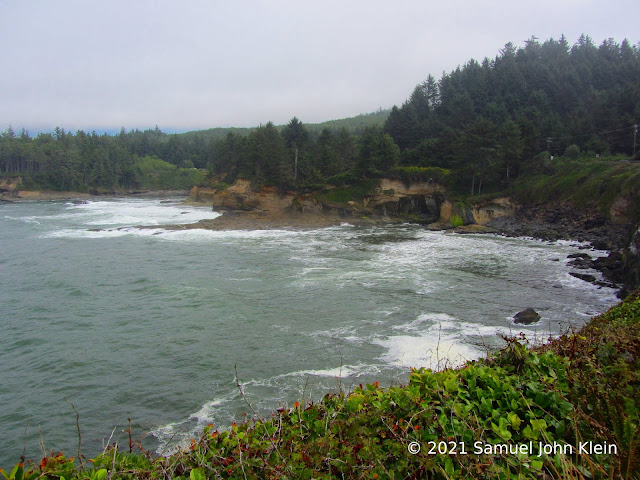 Boiler Bay is named as such because a ship blew up here in 1910. It was a steam-powered schooner, the J. Marhoffer, only three years old, which exploded because of an accident with the ships boiler.

The boiler still remains, and can be seen at extreme low tides. Don't bother looking for it in the picture I've provided, in other words. And if you decide to climb down there when it is extreme low tide, be careful. People get hurt that way.

Because of the ruggedness of the shore at that point, there is no beach access (proper, as there is really no beach). But the viewing area goes out a ways, farther than it did when I was a kid, and provided a surfeit of the things that me and the Brown Eyed Girl go to the beach for ... ocean air, the sound of surf. And seagulls.

Thing about seagulls is they knew how to spot the main chance and know who the soft touches are. When we arrived at Boiler Bay, we had a big WinCo bag of bulk pretzels; by the time we left, less than half, which made their ways into the happy gizzards of a small flock of seagulls (hey, that'd make a good name for a band, don't you think) and a couple of crows. Several juveniles amongst that flock, and at least one of them was using their baby-gull creel to pour on the cute. It worked on these soft-touches like a charm.

While Boiler Bay is one of the premier whale-watching locales on the central Coast, this is not the whale watching season. Being a scant mile or two from the mouth of Depoe Bay harbor, though, there were plenty of boats out, looking for much smaller fish, or maybe just enjoying the day out there.  And it did look like they were having a bit of fun about it.