Another shot as we were getting our get-out-of-Newport (sad as that is) energy together, a true local landmark.
Not only is Newport a major place with NOAA, it's not unimportant to the US Coast Guard. Here, on SW Naterlin Drive, just up from the Bayfront, is the Newport Coast Guard Station. It is a terribly charming nautical thing in a town that's brimming with terribly charming nautical things.
Alongside of it there is a retired motor lifeboat, CG-36503 Yaquina Bay, and it stands as a memorial to those who died doing their duty on the sea and three CG sailors are named particularly. Full information on that can be found at the link you visit if you click on these here words. 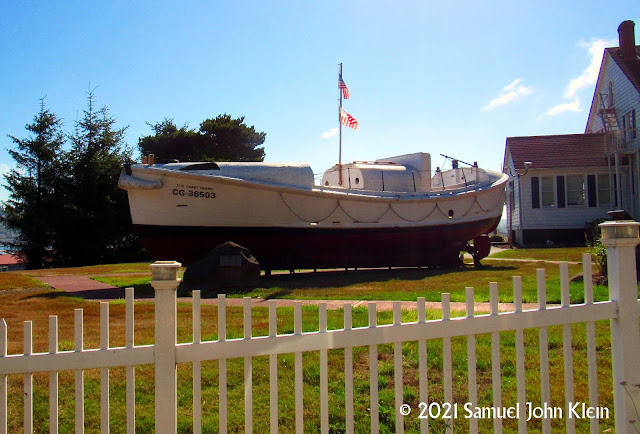 The building itself is very cozy looking, rather rustic in that seaside-town way. A small serrated edge is put on the charm by the Department of Homeland Security tag on the sign, but that is, alas, the planet we live on now. 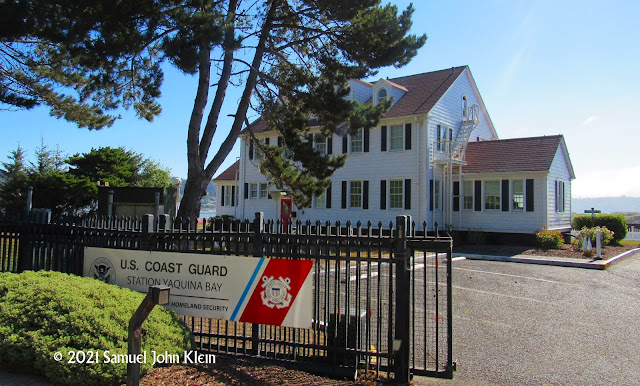 A cute family tale:
Way back in the long-ago, when my late mother-in-law was but a young woman, she lived in Newport, which was where the family first came to rest in Oregon after leaving Montana (as I understand it). She worked as a cocktail waitress down in Waldport, and while coming home, as they reached the north end of the Bay Bridge, her car's muffler gave out with a bang.
Taking the car off the main drag for, I presume, safety's sake, meant turning down Naterlin Drive past the CG station. The bang on the bridge and the rumble of the car woke the personnel there, bringing the young Coasties out to investigate.
I don't know how the rest of that night worked out, but I imagine a young woman suffering car trouble in the middle of the night in a small town could have worse things happen than a group of hunky young service men in little more than skivvies coming out to see if they can offer an assist.
Calendars get made with less of an excuse than that. And so it goes.
Designed by: Samuel John Klein at 00:20