This was a picture that was taken late in the afternoon the day before those I just posted at Beverly Beach. I wanted to drop a comment on this area of Newport before I moved on.
There's an area of Newport they locally call the Deco District. This also happens to be Newport's official downtown. The heart of it is the block of Coast Hwy between SW Hurbert St and SW Alder St. Specifically at Coast Hwy and Alder there are a School District admin building, a historic theater that's a church at this point, and the old Newport City Hall, which now houses a branch of the Pig 'n' Pancake Restaurant empire. They're all toward the end of this block you'll see in my picture: 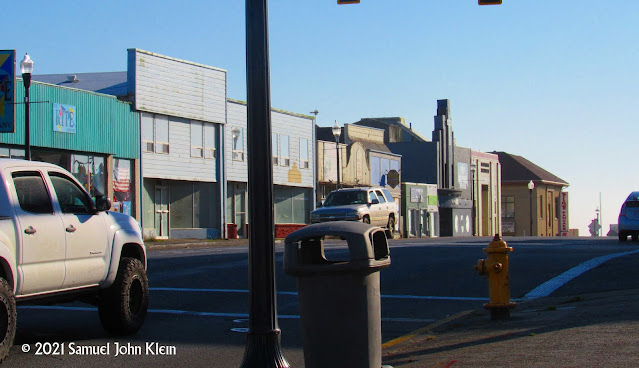 Taken as is in this shot, late on an afternoon in the latter part of August during the long tail of the Covid pandemic, it seems a bit forlorn. But the Deco-styled tower front of the theater should be unmissable.
Google Street View of the corner, sharked by me just a few minutes ago, looks like this:

The type on the buildings forms an underpinning to the Art Deco visual grammar which unifies the awareness across the two buildings. I understand there's a mural with the Pig 'n' Pancake pig logo in Deco style as well. I regret now not taking a few more minutes, what we had, to take a few extra snaps, but we'll go to Newport again.
It's a very charming touch to a very charming town. I've always loved Newport.
Designed by: Samuel John Klein at 19:41