Two of my proudest and most dear possesions of a life partially spent as a map collector is two lovely maps of Portland, one from 1933 ... and the other, from 1927. Oh, and dialuppers ... there's a lot of images here, some of 'em kinda big. Sorry about that, but you really can't show off maps without showing off the maps. I ask your patience.

That's right. I have a 91-year-old map of Portland. And in every way, it's a beauty – condition, physical design, history. I've been enjoying this myself for years, and thought it was time to share.

The dates themselves are significant, in the Address Nerd way. The Great Renaming ... that point in Portland's history where the disparate address grids were finally rationalized into the nice, tightly-integrated grid system that organizes into N/NW/SW/NE/SE directionals, happened circa 1930. Thus we have documents which bracket the time that this great change happened: 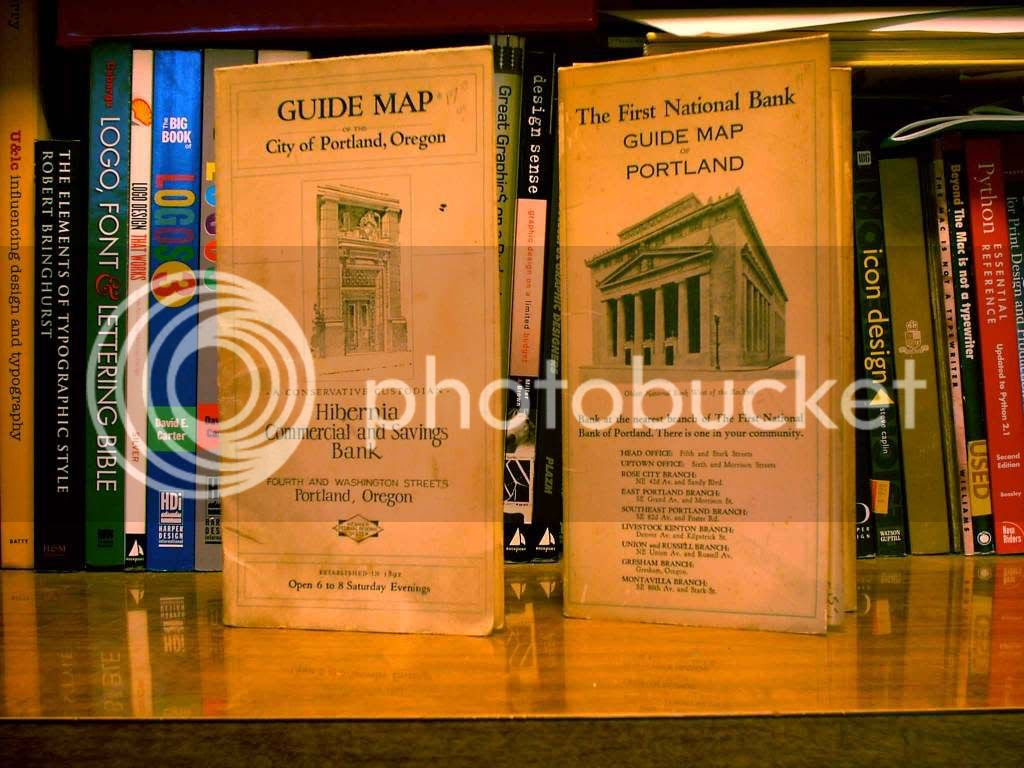 These two maps, folded, are just a little shorter and a little wider than your typical "gas station" style city map. They are actually made of cardstock ­– thick for a map, compares with thickness of playing card stock. A low (possibly next-to-nothing) acid contend and quality glossy stock has resulted in a map which still folds crisply but can still be opened out and flattened ... and has held up for the better part of a century.

The best part of the map design is the quality of the paper. And if you choose well, it will last forever, or near enough as far as the human lifespan goes.

Just as interesting is the difference in commercial content. Note that these two maps were handed out to promote Portland banks! Being as this was around the time of the Great Depression's onset, that must mean something somehow. The map on the left is the one from 1928, and was given out by the Hibernia Commercial and Savings Bank (tagline: A Conservative Custodian), with a sole location at Fourth And Washington Streets in downtown Portland ... and included opening hours from "6 to 8 Satuday Evenings", which must have been an innovation at the time. The map on the right is from 1933, and exults in a real photo (which must have been expensive at the time) of the home office of the First National Bank of Portland, which in time became the First National Bank of Oregon, which became extinct back in the late 70s when they invented the First Interstate Bank.

Good times. Good times. Not only that, but the First National invites you to bank with them at no less than nine branches: Fifth and Stark, the Uptown Office at Sixth and Morrison, the Rose City Branch at NE 42nd Av and Sandy Blvd, the East Portland Branch at SE Grand and Morrison, the Southeast Portland branch at the far-flung SE 82nd and Foster (years before Tom Peterson planted his face there), the Livestock Kenton Branch at Denver and Kilpatrick (that was on the way to the stockyards and the meat-packing plants on the Peninsula back then), the Union and Russell branch (at ... well, guess), the Gresham branch (in "Gresham, Oregon", and the Montavilla Branch at SE 80th and Stark.

Positively cosmopolitan, that 1933 world of finance. And we've gone way off track. Let's get back to it. 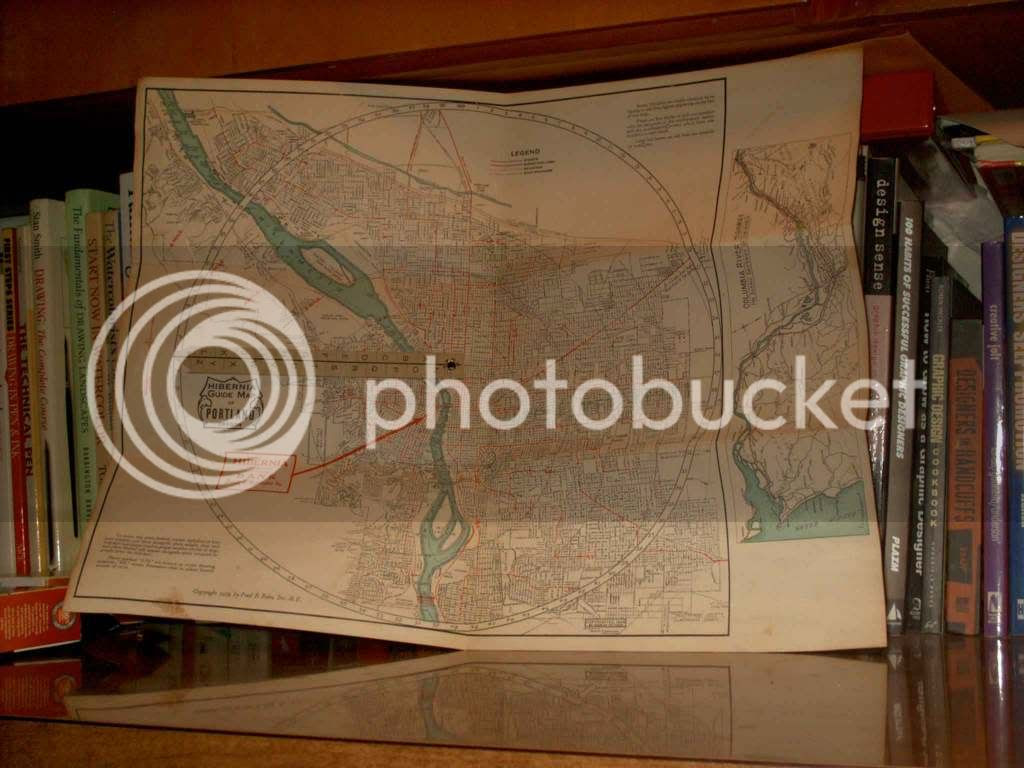 You should be able to clicky upon the map to embiggen, if that doesn't do it, click here. Two things that probably stand out even at this low resolution are the big circle and the pointer. That's a swiveling pointer anchored at the middle by a gromet that's in astoundingly good condition. Why all that? We'll get to that.

Here's a better view, laid out flat on my book counter: 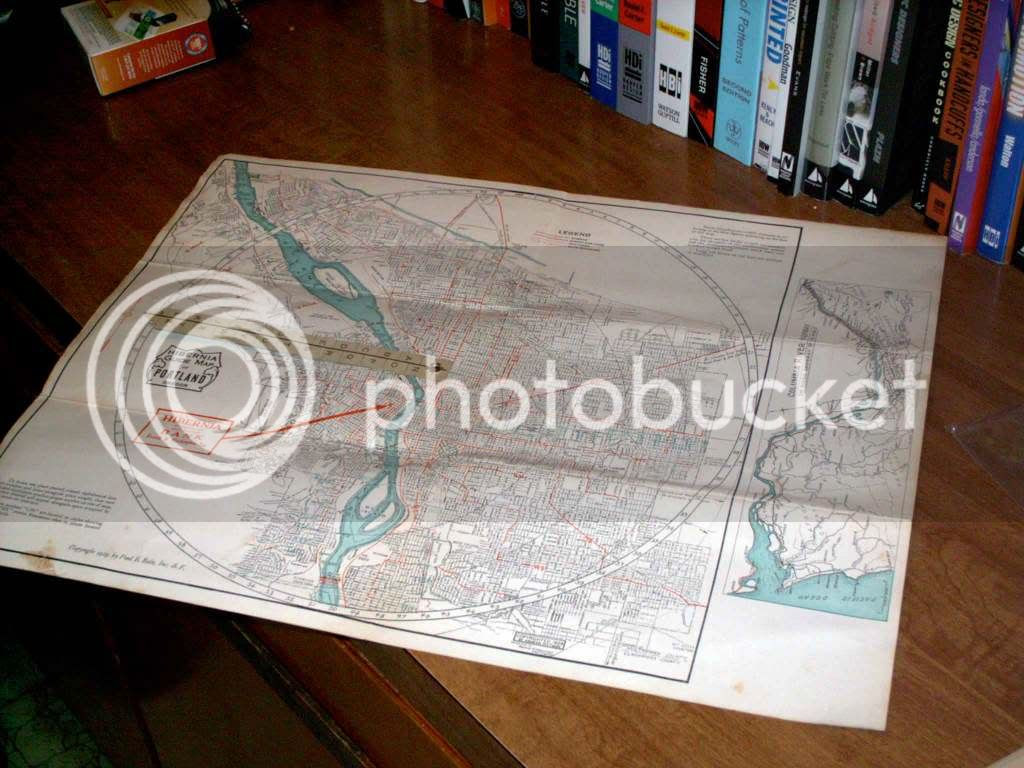 (Again, clicky to embiggen or use this link if that doesn't work). You can see the pointer even better here. That red arrow and cartouche point to the location of the Hibernia Commercial and Savings bank, who it will be remembered, handed this out as promotional shwag.

The pointer is actually an interactive street-finder, and here's how it works. Say we want to find what we'd call today SE Umatilla Street ... that's in Sellwood. At the time, it was called Umatilla Avenue. Going to the index, we find this:

If you could take a good close look at the map, you'd be able to see that the circle is numbered equally about its circumference, from from 1 (just past the 12 o'clock mark) to 100 (at the 12 o'clock mark), the number proceding clockwise. Similarly a close look at the pointer would reveal the alphabet, each letter in an individual graphic compartment; A through M on the left edge and N through Z on the right edge.

The photo illustrates it, though there's only so much clarity I can get. The ViviCam 3705 is a real trooper, but it can only do so much: 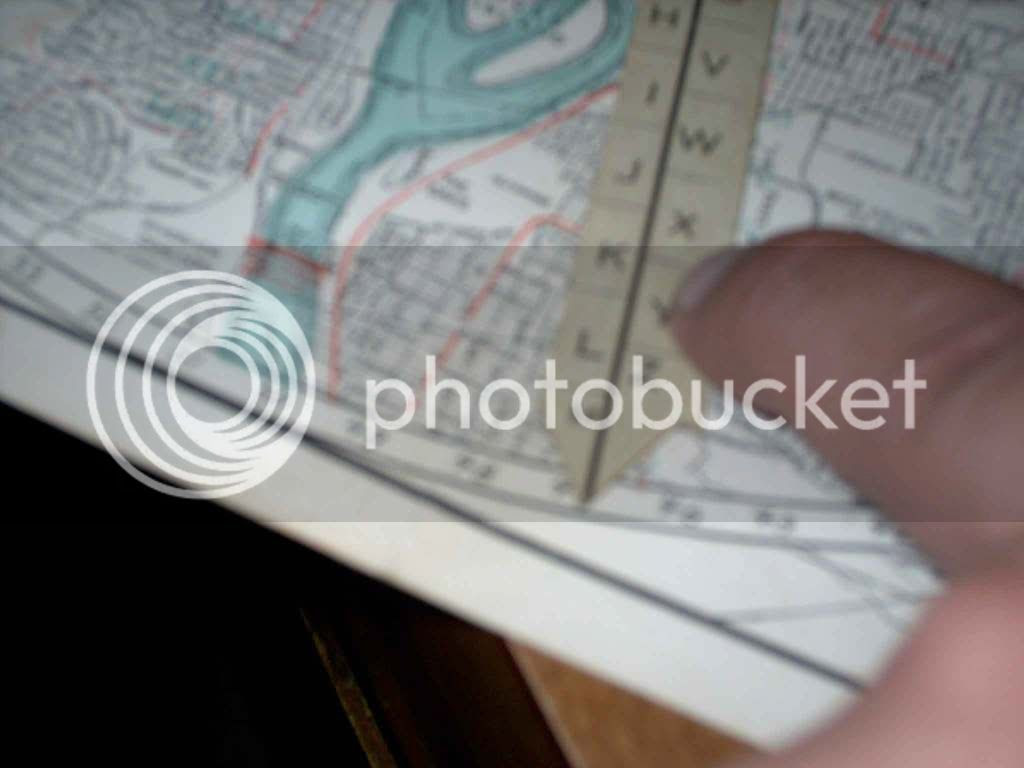 Even in 1928 they were thinking touristy. The inset map the reader may have noticed was actually a small map of the Columbia River Highway ... "The Scenic Driveway of The World" (let it never be said that we Oregonians didn't lack for self-esteem ... we were a lifestyle destination, even as the Roaring 20s came to an end):

I just adore the period styles you see in this. The county names, which make the mind construct the lettterforms out of the negative space defined by the shadow detail, are simply goregous, as is the amount of detail in the map overall. This was NW Oregon and SW Washington in the days before interstates and before the Banfield Freeway. Here's a closer shot. Note how many of the streets are named in the urban area. We have Alberta Street, Lombard Street, Willamette Blvd and Columbia Blvd; Sandy Blvd, of course: Morrison Street, Stark Street (east of Mount Tabor is called "Baseline Road" here), Division Street as both Division Street and Section Line Road; Powell Blvd (as Powell Valley Road); and Foster. On the west we have Canyon Road, Barnes Road, Skyline Blvd, and Terwilliger Blvd picked out (you'll have to trust me here; the resolution is pretty crappy). Sandy Blvd and Stark come together on the east side of Troutdale to become the historic Columbia River Highway at the "AA Camp", and each waterfall is lovingly located.

This is a map for an auto tour, sure enough.

If you want to get a good look at how the whole map looks, here's a composite scan. It'll give you a good feeling for the whole layout; sadly, the limits of where I can get these hosted means I can only give you so much detail. The whole JPG is just over 2MB. When I find a solution that allows me to upload a huge file, I'll do so and give out the link so everyone who wants to can take a good close look. Cllicky up on it to embiggen, or click here if that doesn't work. 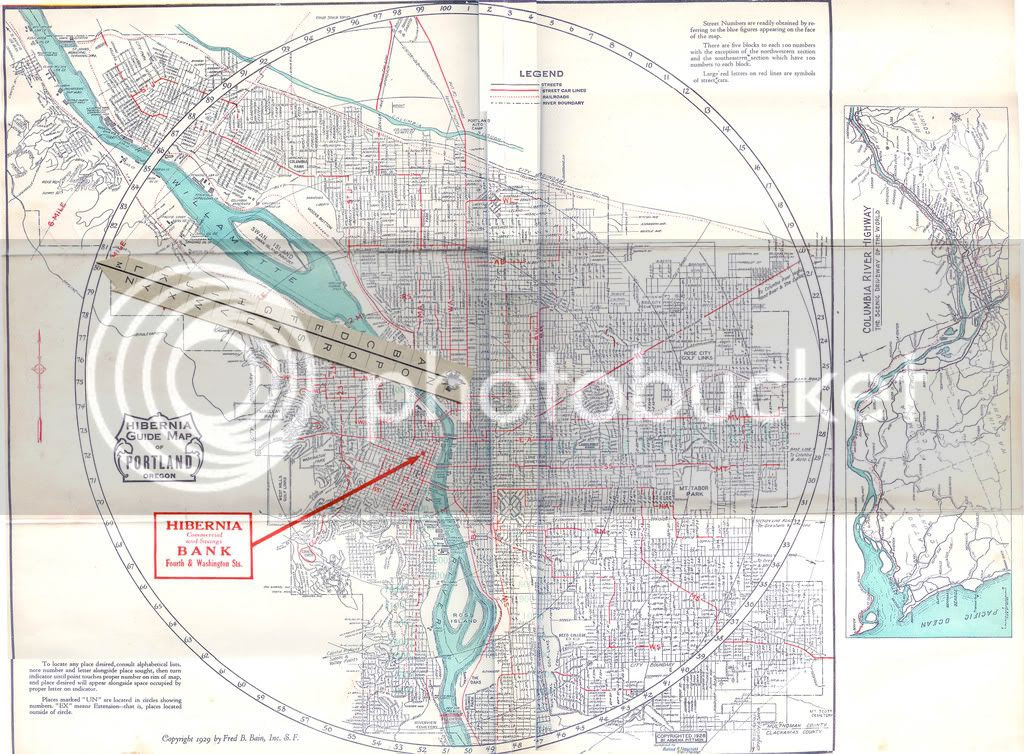 And, for anyone who has work-firewall issues, here's a link to the Photobucket album where you can get good looks at every one I've illustrated so far..

We'll take another look at this, at least one ... and we'll explore closeup (with tight scans) design touches and historical touches I find quite compelling ... and I think other people will too.