The Evolution Of The TriMet MAX Map 3: Along The Red Line

The Airport MAX line opened then, and proved immediately as popular as the rest of the system. Arrivals at PDX were treated to light rail service right at the terminal doorstep.

Airport MAX began as a service from PDX going only as far as downtown. Along the way, perhaps with the prospect of future service expansions in mind, TriMet hit upon a color scheme: the main east and west line of MAX, Hillsboro to Gresham, was to be dubbed the Blue line; the downtown to Airport route, the Red line. Here's what one of the first maps looked like:

Click on the map to embiggen. The abstractization of Portland continues. With the necessity to express the physical reality of one station serving two lines, a level of sophistication occurrs; the stops, which are circles on the lines, expand into cartouche-like ovals where they have to span the two lines. See the following illustration dragging and panning in the Picasa Web Album picture browser is too much of a hassle (It's not exactly intutive, is it?): 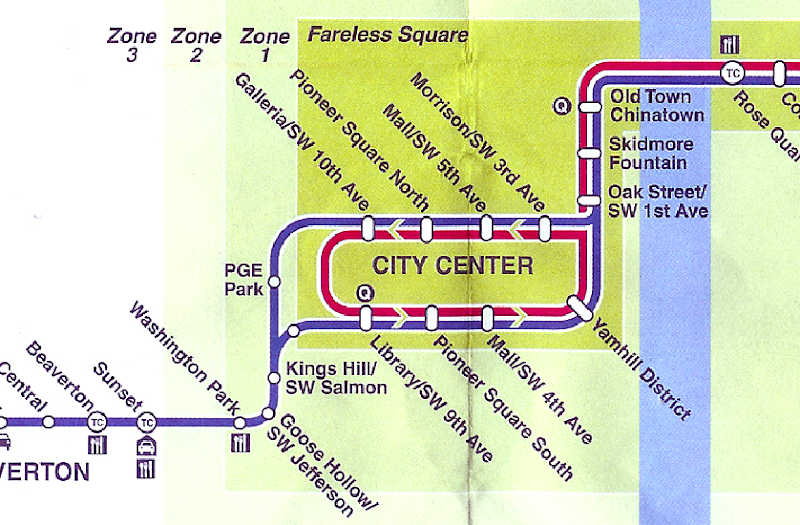 Each station serving both lines is taken as a given, but the oval station markers is a rather urbane touch, and echoes the station icons seen on such worldly maps as the New York Subway maps and the London Underground. Amenities are shown by icons which would be familiar to any world traveller. The ends of the lines are tied down by large colored dots. Fare zones are gradated boxes.

Later this service was expanded westward to the Beaverton Transit Center, and maps evenually started featuring bars labelled with travel times between stations and along major sections. The station labels at a 45 degree angle also contribute to the sophisticated feel of the map. Though largely a schematic, in greater ways this still has some fidelity with the geography, at least in as much as the branch along 1st Avenue downtown parallels the river and turns right to cross it.

This abstraction was to become even more prominent in the next map, which will be posted soon.

PS: A couple commenters in a previous entry noted that David Bragdon, current METRO Council President, may or may not have had something to do with getting the TriMet Map and Guide series started. I'm going to get an email winging his way and see what he has to say about that (I ought to be able to find an email contact for him on the METRO web page, I should think)