During the months of June to August, 2006, FOX television served the SunDial Earth Station with a nearly fatal distraction: Hell's Kitchen. Hosted by Gordon Ramsay, the three-Michelin-starred Scottish superchef known for his exacting standards, his business acumen, and his hot temper, put twelve aspiring chefs, with skill-levels ranging from six months of culinary school to garde manger and sous chef, through the proverbial wringer. The prize: a highly lucrative and powerful position as excutive chef at T-Bones' Steak and Chophouse, called a "million-dollar" restaurant, in the billion-dollar Red Rock casino complex then being built in Las Vegas, a hand in designing the eatery, and a share of the profits.

During that time we were distracted and entertained by this crackling good program, we blogged about our feelings of the show, mixing interpretation and somewhat-inaccurate recap. This reference post provides links to all the articles written.

The twelve hopefuls were divided, as customary, into red and blue teams, segregated in the beginning by gender: 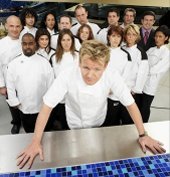 The majority of the shows followed a pattern: Reward/Punishment challenge, spotlight on the challenge winners (and their treat), spotlight on the challenge losers (and thier punishment), preparation for a dinner service, the dinner service itself, then the elimination ceremony, where one of the chefs was selected to go home. Notable differences were in the first epi, where the chefs, after an extremely-brief period of settling in, were commanded to make a signature dish in 30 minutes, and the finalé, where the the two finalists got a good prize regardless of who won or lost.

The series aired in two-hour blocks on Monday evenings, on KPTV-12, with the first hour being a rerun of last week's episode and the new episode being shown second. The exceptions to this were the premiere (two new epis) and the finale (which was one two-hour epi, not rebroadcasting the penultimate epi).

The Episodes
The Others

During the course of the series we did opine on a few other things that were Ramsay-related but not necessarily series-related. Here they are.
And that's it; that's all. We can finally let go of the obsession and get back to design. But we will follow Gordon Ramsay and Heather West, that's for sure.

Interesting things can happen to the contestants in the wake of HK2006. They'll be listed below as I find them. Scroll to the bottom for the newest stuff, and, if there's anything anyone sees that they think would belong here, hey, cha-ching me on the email, baby (or something like that...).

The concept of hell's kitchen, in itself, is a very entertaining experence within its originality. It uses the standard tricks of TV series to get us to stay in through the breaks.if anyone want to Watch Hell's Kitchen Online then click here..