[pdx] Now, That Was Tom Peterson's!

A recent rainy Tuesday afternoon had us out at the corner of SE 82nd and Foster Road. The Wife™ wanted produce. I, on the other hand, wanted pixs.

A week or two prior, I can't remember why, we found ourselves near the cross of 82 and Foster and found that the old Tom Peterson's store had undergone some changes. Off had come the mustard-and-earth-toned metal siding, revealing Tom's 82nd Avenue flagship is an echo of what it once was.

The thing that surprised me the most was the posters stuck up on the windows on the 82nd Avenue side, promising "Tom's Super Service" on brands that also seemed to be of another day, brands like Magic Chef and Hotpoint.

Looking inside the newly-revealed windows we could see the shambles of tearing out the interior of the building. We've heard that they're going to pull down the building but we don't know for sure; and this is not the end of an era...not quite, anyway...Tom and Gloria have removed to Insley Street, just off SE 82nd, behind the '76 station on the corner and between that and the Asian market that calls itself "Chinese Food Value". It's almost as though Tom is kind of fading away.

Here's a couple of other good pictures: 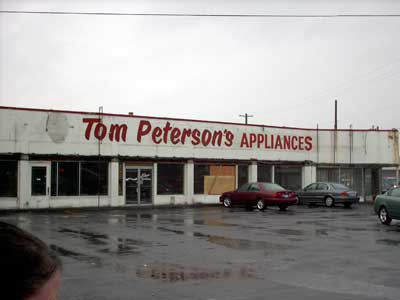 A view looking WNW into the parking lot of the old building (La Rog Jeweler's building is immediately on the right out of shot. Note the Tom-shaped spot on the wall where his distinctive head-logo used to be. 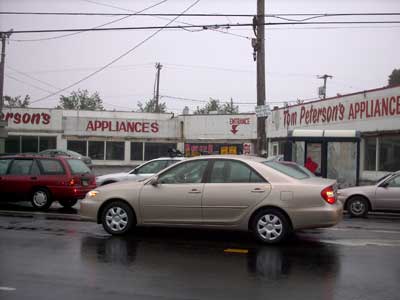 The old building from across Southeast Foster Road, standing in approximatel in front of the Arby's.