This is one of my favorite paintings ever: 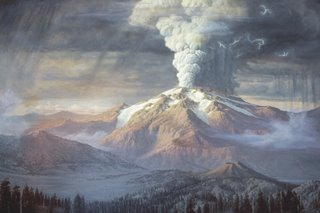 It is a painting, an artists conception. Approximately seven thousand years ago, what would have been Oregon's tallest mountain if it still stood commenced the eruption that would cause its collapse. The remains we know, of course, today as Crater Lake.

While nobody could probably ever be exactly sure what Mazama looked like, clues can be read from the slopes going up to the rim and guesses can be made since scientists have a good idea how natural processes in the area might have occurred, and other peaks nearby, such as Shasta, to compare with.

Quite a hulking mountain, no? It even looks mean.

The painting was created some years back by an artist named Paul Rockwood, and I found it again on this page , which is a USGS fact sheet on Crater Lake and Mount Mazama.

It's a guess. But it's an inspired one. In the scene, the 12,000 foot tall Mount Mazama is just beginning its ultimate eruption.

Quite an inspriation.
Designed by: Samuel John Klein at 23:13