2540.
We took some time out from OryCon 32 on Friday afternoon to peep the mandala I mentioned in the previous-minus-one missive. It had come quite a way, well towards being finished.

I, sadly, forgot the camera and do not have pictures. A completed version of one can be found at 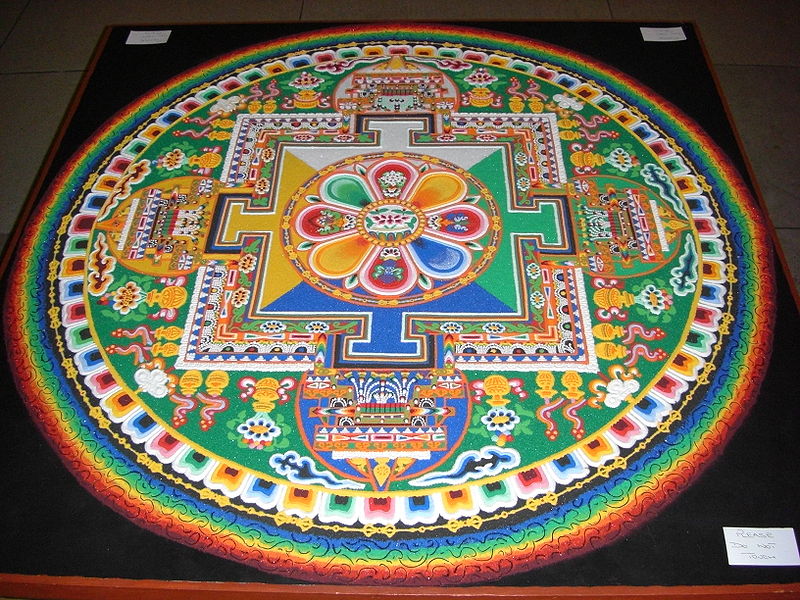 this page, click on the image just to the left of the text and it will expand for you; also some pictures of a similar one under construction can be seen here. A picture of a similar mandala, produced for the Dalai Lama's visit to the British House of Commons in 2008, (which suggests some style variation is allowed) can be seen right; it's sourced from Wikipedia here.

I can say that the impression upon approaching the mandala is that it's remarkable just how much surface relief it has. The nearest visual analogue I can cite is the way that the tops of decorated sheet cakes you get from the Safeway look. There is a granular visual texture to everything, and the fact that they are creating small ridges, mounds, and piles of colored sand are obviously explicitly taken advantage of the the monk constructors to cause some design elements to lead the eye about and stand out somewhat as focal points.

As I mentioned above, it looks like some variation in execution is permitted. Left, find a photo clip of the interior; an eight-petaled design. 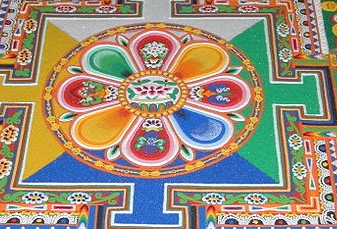 Notice how the gradations in color from the center to the outside of the petals at NW,SW,NE, and SE are discrete bands of color. In our library's version, the monks have achieved a gradation worthy of Adobe Photoshop or Illustrator. It's truly impressive to see, and I'd love to know how it was done. Sadly, in as much as I'm not Buddhist nor a monk nor looking to be one, I should probably never find out. But it is suggestive of one of my favorite ideas, which is freedom within bounds and limits, of creativity amazingly unleashed which you are made to work within a canon of expression, which is utterly counter-intuitive but seems to be the way life works.

I've experienced it. But it defies easy explanation. And I digress.
When we got there, it was just before quitting time for the day, which was 5:30 PM. Four days into a five-day construction program, the mandala was largely complete, with just the outermost ring to be filled in. The circle of petal-like shapes just inside that were about 99 per cent completed.

The construction of the mandala depends of steady and exacting precision application of those colored powders by each of the monks. The tool for this is called a chakpur, which pictures I took can be seen in the entry two-back, and they're simply long metal funnels with a sawtoothed area on one side. The monk scoops up some colored sand from one of the bowls, strokes the chakpur with a metal stylus to make sure that sand has packed up against the applicator end, then lays the funnel against his forearm and goes to work. By lightly rapping the serrated surface back and forth, an almost waterlike stream of sand is deposited. The rest, I'm guessing, is practice and skill.

Once again, the mandala will remain for public viewing (the mere act of viewing seems to be held to impart a blessing to the viewer) until the 29th at noon, at which time the mandala will be ritualistically dismantled and the sands will be deposited in the Willamette (no worries, people, it's non-toxic. You think Buddhists would want to harm a fishy?) in order to release the compassion blessing to the world.

A good idea of what physical effort goes into creating a sand mandala can be seen at the Liveleak video here: http://www.liveleak.com/view?i=b42_1275511628. Six days condensed into about two minutes. Very enlightening, let's say.