2503.
I haven't had a good story about a street blade to tell in a while, but while digesting the information delivered to me in the last missive, I've stumbled on a really cool blade design, and couldn't wait to share it.

I'm surprised I haven't heard about the design of the blades in Philadelphia before. They're quite nifty. One of the classics of big-city American street blade style, I've found in my informal, note-free surveys, is the address index going on a little tab along the top of the blade. That way, the full street name - the specific (actual street name), generic (st/ave/ct/whatever), and directional (N, S, SW, etc) are the star. The address block is important, but most often, you're probably just interested in what street you happen to be on at the moment.

Most towns, in order to simplify street blade construction have, over time, incorporated the block index into the main blade, resulting in a design that uses a standard, simple rectangular blade shape, whose benefits in creation and production ought to be self-evident. But the classic tab on the top goes away.

Philadelphia's design actually creates the blade outline with the tab, effectively, built-in ... and including a lot of pedestrian-and-motorist location information either directly or indirectly. Here's one for the end of the 2100 block of West Kater Street, in Philly: 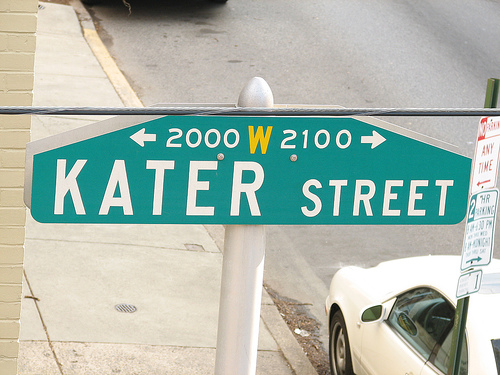 Intersection of Kater and 21st in Philadelphia
CC2.0 BY-SA licensed by creator Edu-Tourist
The sign is clear and beautiful, and is particularly notable for for including the directional not as a part of the street name (on the sign, at least) and as a data point in the block number display, which also gives you a clear idea of which way it is to the baseline - important in cities like Philadelphia, where the central business district is usually also the location of the local address grid origin.

Knowing this sign and getting a look at the sign on the other corner of 21st, you'd know at a glace how far away from the downtown core you are, and even be able to infer which way north actually is (remembering to account for the tilt of the local street grid).

The incorporation of the tab into the design of the sign makes for a non-standard shape, but presumably, Philly has gotten this obstacle circumvented. Notable as well is the practice of spelling the generic (STREET, in this case) out rather than abbreviating it, but removing the block number and directional from the main part of the sign makes this possible. Presumably if the specific were a particularly long word, that'd call for an abbreviation.

About the only drawback is that any geegaw personalizing the blade for the the district would have to go below, as in this photo: http://msnbcmedia3.msn.com/j/msnbc/Components/Photos/070730/070730_philly_hmed_4p.h2.jpg (referenced in this discussion board thread at PhiladelphiaSpeaks.com), which is a little bit of a break from tradition - it's also customary to put such identifying plaques in the pride-of-place spot, along the top, as we do here in PDX.

But withal, it's a grand design, and we deem it nifty.