2507.
My last missive about two-wheeling was a while back. Partially the muse left me, a bit; partially I was just getting into the groove.

The attitude of a non-car commuter takes some time to re-establish, even if you're no real stranger to the thing. Memories of using Salem's Cherriots to get to high-school every day across town came back, and I kind of got lost in them. 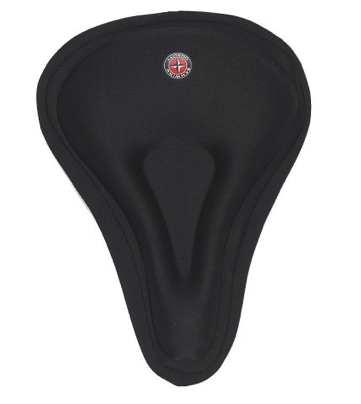 But ... accouterments. I needs them. The bike I had has a gel cover for the saddle which was old when I got it, and it was coming apart seriously. Target to the rescue. It's a good place for mass-market, value-priced accessories, and in this case, I got a Schwinn-branded "gel-contoured seat cover". About $20. There's a picture of it right. One may notice a contoured "pocket" right there in the middle of it.

It is for what you think it is. It cradles the junk. And it's easy to snicker and feel kind of embarrassed about writing it, but everyone has some ... well, unless you've had a very unfortunate accident or major recreational surgery, in which case bicycle riding may or may not be on your agenda at all ... and the saddle, as I've observed elsewhere, is called a saddle  and not a seat for a reason; a seat provides comfort, a saddle prevents what's underneath from introducing itself to you colon.

High colonics are bad enough. When done with a seat tube they can be life-changing.

Anyway, it's astounding, really, how much a little support can do for you. This one seat cover has given me a better perch, therefore more power. I'm quicker now because I interface with my bike in a much more better, logical and designed way. And yes, the amusingly-named contoured center relief zone makes a great deal of difference.

Although biometric design can get a little uncomfortable at times. I was looking at a picture of a saddle that was, as the ad copy said, specifically designed for the female anatomy and, to be honest, it looked like something I shouldn't be getting a look at. So you have to be a little brave with this stuff sometimes.

The other accessory of which I'm thrilled with is the rear rack. They've come a long way. I got a Schwinn-branded bit of gear that simply mounted on the seat tube. A few shims for the tube, tighten down the clamp and it's good; holds small loads, which is great ... comes with a bungee ... and, most important, forms a shield from the fantail that the rear wheel will kick up when I ride in the wet, of which we're going to have some this weekend, the weather gods say, and I'll have to sally forth regardless.

Holds about 20 lbs, but that's all I need for now, really. And everything's Schwinn-branded, so it makes me look like some sort of connoisseur, or at least a brand loyalist.

Will have to Schwinn out of here pretty soon.

Email ThisBlogThis!Share to TwitterShare to FacebookShare to Pinterest
Filed Under: Bicycle Diaries, liff in PDX