I wasn't thinking of or looking for another picture of Portland's skyline or any sort of throwback action but I was inspired to go back and look through some very old photos ... I mean ViviCam 3705-years-old ... and I couldn't hold back from sharing this.

This is a photo taken in April 2010, on a gray, misty day, of the downtown Portland skyline as seen from the very east end of the Ross Island Bridge. It is notable for what isn't there: there are a number of buildings that are here now that aren't there then, but the big thing that isn't there would be down in front now. 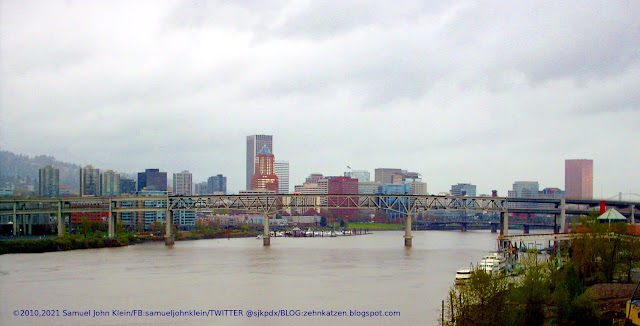 The thing that's missing is, of course, the Tillikum Crossing bridge, which would be between the photographer's POV here and the Marquam Bridge. This is one of those photos I referred to earlier: there are locations that are no longer possible to get the same photo because of the development that has happened here in the last 20 years, things that have fundamentally changed the look and atmosphere of the Rose City. Buildings that now exist where once there was open space, and massive new constructions that have interposed themselves between a still-accessible space and the thing one once went to that place to observe.

I'm thinking it's past time I got an updated downtown skyline photo. Not just of my favorite angle, from the top deck of that bridge there in the photo, but also an update of this one, from the east end of the Ross Island Bridge.