2994.
I shelved this one a while back, but it made me react so I'd have to say something about it. It's a good change.

Recently (but see stipulation above), Taco Bell has changed a bit of the design on its sauce packets. It created a better attitude, one I like better than the old one. 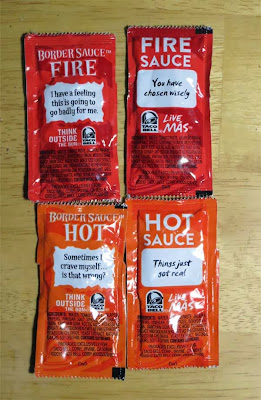 The whimsical, wacky type is gone, along with the old tagline Think Outside the Bun, which is a good change because it all seemed to be trying too hard, from the jaggedly lines to the forced and awkward edginess of the cute sayings in the middle of the design.

The literary review is strictly subjective. Maybe Things just got real just kind of annoys me less, in an unarticulatable way, than Sometines I crave myself … is that wrong? (For the record, it kind of is. If you're going to consume yourself, at least get a room before you do so. Thanks from me and everyone else).

The large type has a nice, straight-forward strength to it that hints as to why Swiss design got so dam' popular. It's straight ahead and just tells you what you want to know … as helped along by the elimination of the "Border Sauce" brand (the 'run for the border' tagline being almost older than the 1990s), which made for an awkward coinage at best. Besides, nobody I've heard ever called it that; the cashier at the window just wonders if you want Hot or Fire, never asks "Do you want some Border Sauce Hot?"

What it all comes down to is keeping the image current without trying too hard. The graphics on your sauce packets don't have to do the heavy lifting, they just have to harmonize with the rest of the brand. And this, they do.
Designed by: Samuel John Klein at 09:53

Email ThisBlogThis!Share to TwitterShare to FacebookShare to Pinterest
Filed Under: package design, typography