During our first few years here as permanent Portlanders, we lit up to Council Crest Park every chance we could.
For those of you unfamiliar with Portland geography and history, it's like this: Council Crest is a very high hill in SW Portland, topping out at 1,070 feet above sea level. It's got a gorgeous and long view almost all directions, the north being obscured by a lush grove of evergreens, and the south somewhat obscured by hills and neighborhoods that direction, though, on a clear day you can catch a glimpse of every Cascade volcano from Tahoma (Rainier) to Seekseekqua (Jefferson). Its name came when a group of church people met there for a conference in 1898 and thus decided to call it Council Crest; over the years, this evolved into it being called that because representatives of surrounding indigenous tribes thought it the idea high ground for meetings though, in actuality, that likely never occurred anywhere but in the vivid imaginations of colonizing settlers.
This day, in May, 2010, I made Luuit (St Helens) the star of the show. 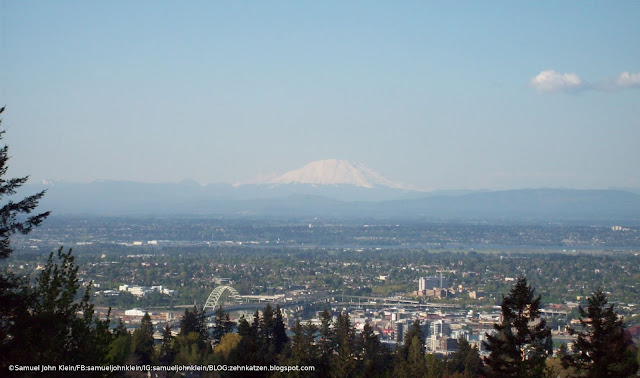 In the lower left, just above the tree line, is the Fremont Bridge. Just to the right of the tangle of ramps that it feeds into is a tower of Emanuel Hospital; the crane a presage to the seismic shift in development and income that was just then still incipient. The developing nacre of the Pearl District can be seen along the tree outline in the lower right.
In the middle distance, the Columbia River; beyond that the eastern suburban fringes of Vancouver, Washington. And, if you squint at the left-hand edge of Luuit there, you can just barely make out a round hump, and that's the summit of Tahoma (Rainier), which means that me and a great many Greater Seattleites were looking at the same thing at the same time, Advance Cascadia Fair.
Those practiced in that-was-then-this-is-now can probably make out all the changes in the cityscape since then.
Designed by: Samuel John Klein at 10:38