Last of the throwback treats for the day, this goes back to 2010, and is another composition taken off the brow of Mount Tabor, which is another way Portland's dear to me; I don't get the sort of emotion I get looking at this when I think of any other town I've been in.
In reviewing the photos I'm realizing that that evening, in July 2010, I was really pushing the Kodak EasyShare C813 to its limits. There's only so much low-light goodness you can get out of an 8.3 Mpx sensor designed into a camera meant to appeal to the people who thought, when I was a kid, that Kodak Instamatics were serious picture-taking (this is not the slag it may seem, after all ... I was that sort of person, growing up. Aggravated me that you couldn't take night shots with those cameras. Seemed rather unfair). 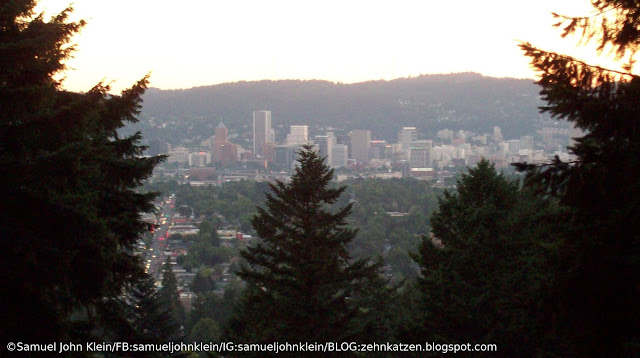 So, sure the view of SE Hawthorne Blvd there in the lower left is a bit fuzzy and downtown set against the backdrop of hills and a bright sunset may be a bit grainy, but it's clear enough to call back that time, just a decade ago, and to those who know Portland's skyline, to remarkably show off that changed skyline.
So many new buildings there now.
The haze of the physical picture artifacts come off as a kind of an artistic interpretation of memory, now. Warm and hazy, filled with emotion and meaning. Same planet, different world.
And so it goes.
Designed by: Samuel John Klein at 13:00