Those of you hardcore SE Portlanders will remember that, up until late 2019 or early 2020 there was one of the last classic drive-up Dairy Queen burger stands in, hell, the Universe, I guess, at the corner of SE 57th Avenue and Division Street, across from Clinton Park and Franklin High School and Atkinson Elementary.
It was a burger stand, as in a kitchen in a building and you either parked in the lot and ate or you ate on the tables up front if the weather was nice, or you headed through the drive-through and took your haul to wherever you were going to consume it. Last year (I guess), before the pandemic, they, with little fanfare, began to pull down the ancient little building and I found out by Googling about that they had apparently decided they were going to rebuild in a more modern building, with a 2nd floor because the lot was that small.
At least that's what they said. Who can tell for certain if it's even going to happen anymore. We go by that part of Division occasionally and it's just the old parking lot with a gravel square where the building was and a big steel shipping container alongside, coated in graffiti now, holding things related to the deconstruction presumably. It keeps its own counsel in these matters.
But in April of 2019, me and the Brown Eyed Girl stopped by for a snack or perhaps a burger, and I got some photos of the park across the way, golden in that light. 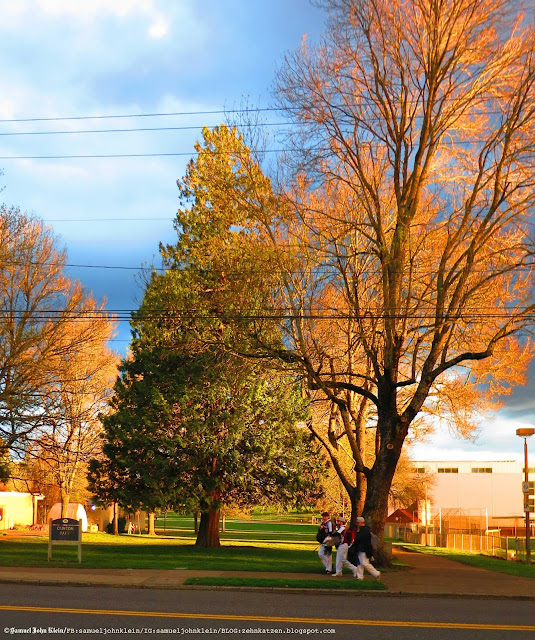 That was then.
That Dairy Queen's burger game was immaculate, my friends. Several minutes down the road, those burgers were still hot, just the right amount of juicy, and always perfectly cooked.
I suspect they won't be rebuilding, no matter what they meant to do.
And so it goes.
Designed by: Samuel John Klein at 11:49