Sandy Blvd As Seen From Council Crest, May 2010

Today's throwback gem returns us to our Council Crest crow's nest of the year 2010 to look at one of Portland's most unique eastside features: Sandy Boulevard. that magnificent diagonal road.
In its entirety it runs from SE 7th and Washington all the way out to Troutdale, the road actually carrying a SE directional from its root to where it crosses Burnside at 12th. As we all may be aware, this was an unbroken road until the Burnside-Couch one-way couplet was decreed, which closed off that first two blocks of NE Sandy, 12th to 14th, and now there's big condo silos there so there will be no going back on this, no, not ever. And, east of 99th in the Parkrose nabe it stops being that magnificent diagonal boulevard and more or less follows the line of the river about a mile north.
The diagonal part, though, is a defining Portland thing for me. No town does diagonal roads quite like Portland does. 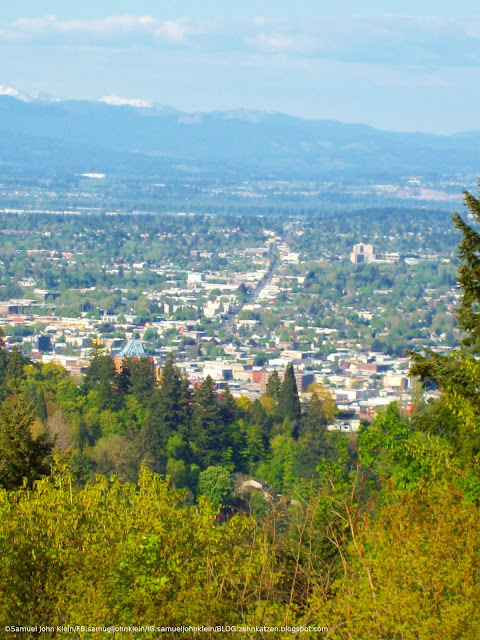 The road, ironically, isn't absolutely straight, although it seems that way on maps. The very mild kink in it is easy to miss unless you're looking hard at it. It's obvious on the ground, but not so much from above. And that kink is actually easily observed as in the photo, when you have an acute-angle perspective on it. That bend is where you'll find the Portland nabe known as Hollywood, kind of a downtown for middle-northeast Portland.
Immediately to the right of that, the only high-rise visible in that area, is an apartment complex called Hollywood East; public housing, a 17-story tower at 44th and NE Broadway. And I doubt that it would be obvious even today from this vantage, but a lot of the buildings in Hollywood have been swapped out for other buildings, especially along the north side of Sandy between about 42nd and 47th.

Beyond that a pale blue streak across the photo denotes the Columbia River, and beyond that? Oh, some part of eastern Vancouver, or Camas perhaps. It's all pretty much the same in that part of Clark County Washington.
Designed by: Samuel John Klein at 02:37