The Mountain And The Port

The Columbia, as I've said, is a working river.
A hard working river, it must be further defined.
And it does it all beautifully, tended to with care (some enlightened, some misguided, but that's what you get with humans) by all who are deemed temporally responsible for it. It throngs with ships but doesn't seem overwhelmingly polluted; you can walk the shores and the water seems fresher and cleaner than you'd expect, and it's in the most unique setting, with one big town on each bank but majestic volcanic ranges within easy sight.

Those port facilities are on the north bank of the Columbia, a Port of Vancouver terminal in Washington. We, of course, view from the Oregon side. I don't think Wy'east has much of a care or knows what a state is; to Wy'east, it's all one and the same. It's been here before any of us came, and it'll be here long after we go.
Here's a pan-right and extreme closeup looking up river: 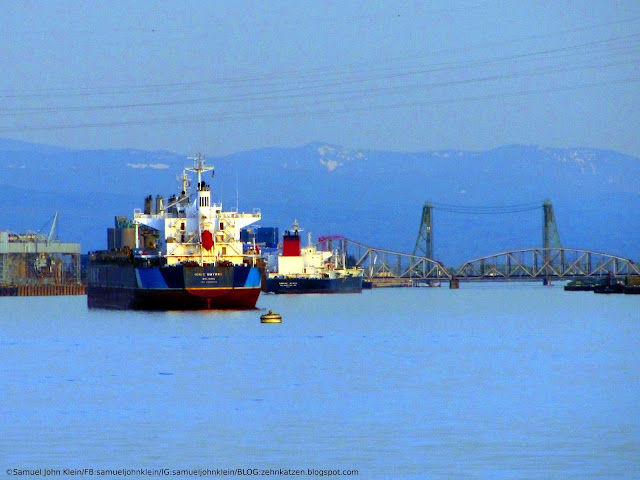 That most distant bridge with the two towers and the cable between is our beleaguered and imaginatively-named Interstate Bridge, that's where I-5 crosses. The truss in the middleground is the railroad mainline bridge. The Cascade crest, beyond. It's a big world, my Willamette Valley, but surprisingly narrow.
Designed by: Samuel John Klein at 10:36