From Parkrose, that day, we headed toward the end of the North Portland Peninsula. The Brown Eyed Girl deemed a visit to Kelley Point was overdue, and who am I to contradict that logic? It's solid. Iron-clad.
For those who are not of the Rose City, the North Portland Peninsula is that part, generally speaking, west of William Avenue where all streets are prefixed NORTH; the Willamette River swings northwestward before finally joining the mighty Columbia. It's an inland peninsula; two of the three defining sides are made up by the Willamette, the other, the Columbia. If you look at a map, that peninsula kind of resembles a thumb it the thumbs up position; at the tip of that thumb, on the right bank, where the Columbia and Willamette join, is Kelley Point.
There is a City o'Portland park appropriately named after the point.
Now, also, this is the bitter end of Portland's port district. Unlike such cities as Seattle, Portland's port is out on the edge of town (there were terminals closer to downtown, but, like other long-time city residents, they're getting pushed out to the margins too). The port terminal known as Rivergate T5 is on the Willamette River just south of Kelley Point, whereas T6 is located on the south bank of the Columbia just east of that.
All of which is a roundabout way of saying when you go down to Kelley point at the Columbia side, you are likely to see such as this: 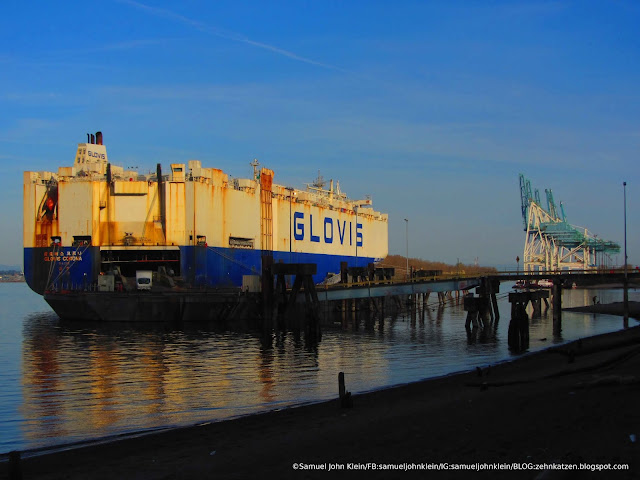 This is the Glovis Corona, a vehicles-carrier according to VesselFinder.com: 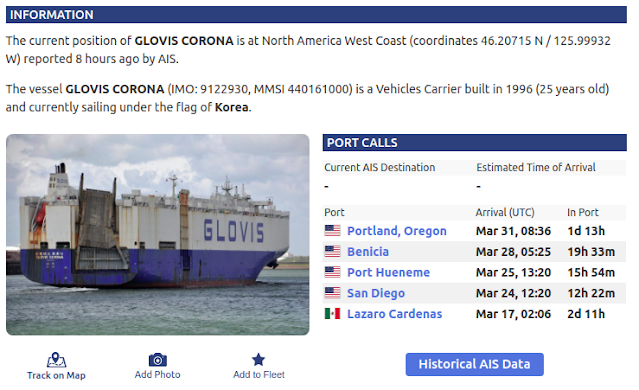 Its current position seems to be about 100 miles west of the Columbia bar, making for the general direction of Asia.

The patina of rust makes it look much older than 25 years; gave it a sort of post-apocalyptic look (but what doesn't have one, these days?). At first, coming through the trees toward the shore, I thought someone put up a big building over there. It's easy to forget how big these brutes are unless they sail right along side of you, or get in the news like Ever Given and the Suez Canal, a few days back.
It's also sort of dishevelled-romantic. Well, at least to this landlubber.
Designed by: Samuel John Klein at 10:54