Cargo Coming In At PDX, As Seen From Rocky Butte, with bonus Luuit

Rocky Butte, according to Wikipedia:
...is an extinct cinder cone butte in Portland, Oregon, United States. It is also part of the Boring Lava Field, a group of volcanic vents and lava flows throughout Oregon and Washington state. The volcano erupted between 285,000 and 500,000 years ago.
Its summit is 613 feet, or 187 metres, ASL: its obstinance in the face of the Missoula floods is what caused a riffle in the alluvial flow driven by those which we know of today as the Alameda Ridge that snakes its way east-northeastward through NE Portland for several miles, defining a number of neighborhoods and the course of a historic NE Portland street known for lovely views and high property values.
It also has gorgeous views of its own. It takes in at least two major Cascade volcanoes clearly, miles of tree-covered eastern Portland between there and downtown, beautiful stretches of the great Columbia, parts of Vancouver and Camas, and Mount Tabor, if you look the right direction. Yesterday we spent an invigorating hour on the top of it, at Joseph Wood Hill Park, where there's a viewpoint with pumice paths, and over the next handful of blog posts, I'll be sharing these views.
Yes, there will be Wy'east. Just not yet.
The long view today is centered on a landing UPS cargo jet at PDX. The industrial and commercial land going north from the line formed by Sandy Blvd and Columbia Blvd are spread out at ones' feet here; and this all just so happens to be the main approach from the east to PDX itself. You're never late to spot any given plane; just early for the next one. 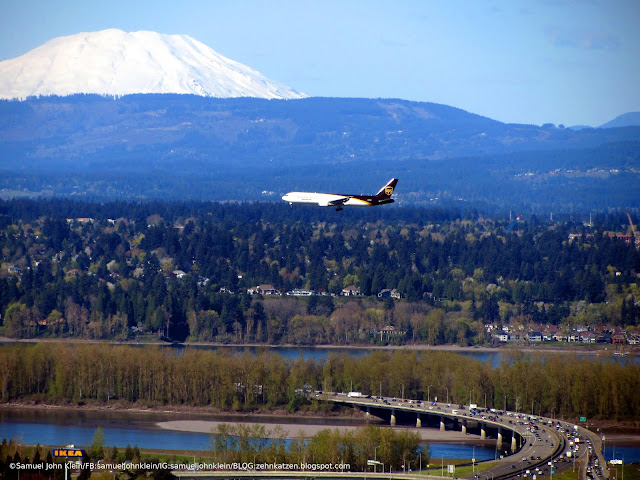 In the foreground you have Government Island bisecting the Columbia and I-205 curving along one of the spans of the Glenn Jackson Bridge. Beyond the Columbia is, of course, the slopes encompassing the riverward part of outer Vancouver's Cascade Park nabe.
Luuit/Mount St Helens should, at this point need no introduction though, at this time of year, still snow-clad, it's on fine form.
Designed by: Samuel John Klein at 11:42