The camera I'm currently using, the Canon PowerShot SX230HS, is a replacement for my late, lamented PowerShot S100 which died suddenly and tragically young. It is not the same as that little charmer, and not necessarily better in all ways; I found the most capable camera in my price range that was as close to function and temporal manufacture as the S100 was.
In some notable ways it actually exceeds the beloved S100, and that would be in optical zoom. Whereas the S100 had 5x optical zoom, the SX230HS has 14x optical zoom. When you throw in the digital zoom you get at the end of that range, how much magnification can you get?
How about 56x? No, I didn't mistype this. And it's flawless. In a somewhat-dated, point and shoot digital camera, it's a boon.
Here's a thing I did: when at the corner of 116th and NE Shaver, in the previous missive, taking pictures of our beloved mountain, I wanted to come up with a baseline idea. So I zoomed in, stayed steady and snapped. This is what I got of this modest camera: 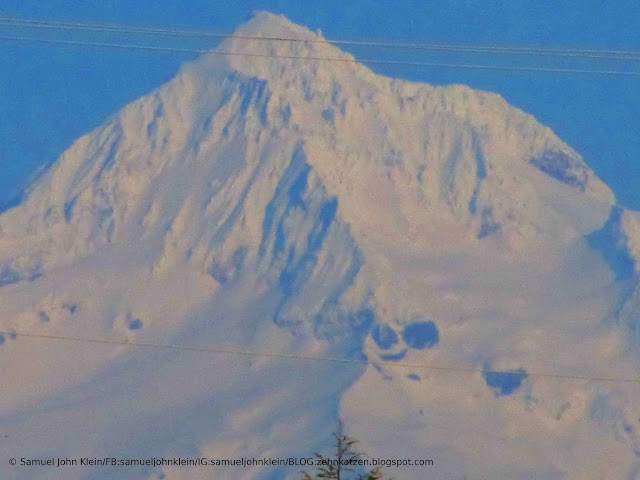 I mean, if I got any closer, I'd be climbing the danged thing.
Designed by: Samuel John Klein at 10:27